Coil Inducing a Back Emf in its Own Circuit 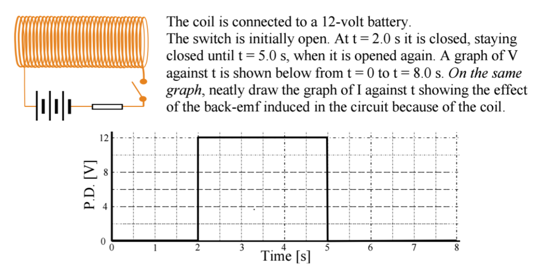 For this above question, how is even a back emf induced in the circuit because of the coil. Doesn't Faraday's Law say the a change in flux threading an external coil will induce an emf. So then how can the coil induce a back emf in its own circuit?

Below is the solution. Which looks right if a back-emf could be produced in the first place.

The current $I$ through the circuit is not constant right from the beginning.

It was zero when the circuit was open.

After a sufficient amount of time-interval, $I$ would attain a steady value $I_0\,.$

So, as the current $I$ changes at the rate $\dot I(t),$ there then arises the induced electromotive force which would tend to run the current in such a direction so as to oppose the flux change.

So, applying the law of conservation of energy, we get $$\mathcal E_0 + \underbrace{\left(-~ \mathrm L~\dot I(t)\right)}_\textrm{Back EMF} = RI(t);\tag I $$ assuming the direction of the current driven by the battery as positive.

Hy there! I am searching for an answer in those questions myself.

Without any bad intention i would like to point out, that to the question :"So then how can the coil induce a back emf in its own circuit? " the right answer would be: It doesn't!

Even if by some miracle it does violate the physic laws how electrostatic forces work, no reply here did answer the question.

There is an observed and measured behavior of electricity in coils, then many wrong conclusion were made and absurd theory emerged. With the wrong words, even the relative 'simple' and logical science, physic will become incomprehensible. (For example, Counter electromotive force in generators and backemf in a DC PULSED coil are not the same.) The same goes to the word 'induction', we define a certain way to make an electron move - induction.

What they call a coil's induction or selfinduction (L)(which is a misnomer i belive) is none other than an effect of the physical and geometrical propertys of the coil which affects the movement of the electrons (and consecvently the generated magnetic field). Everything in the universe is particle movement and interaction, be it smaller or bigger. Electrons included. They are complex particles and as such have a physical form, shape, and of course inertia.

'...The circuit has an EMF E0 in the form of the battery of 12 V. The current I through the circuit is not constant right from the beginning. It was zero when the circuit was open. After a sufficient amount of time-interval, I would attain a steady value I0. Prior to that I˙≠0. It can't go from 0 to I0 at an instant. So, as the current I changes at the rate I˙(t), ...'

so far so good but then it happens:

'...there then arises the induced electromotive force which would tend to run the current in such a direction so as to oppose the flux change...'

'ARISES'..?? What the hell, its not the Lich King from WOTLK! Where the hell is this current? Even this simple diagram show a fine decaying current strenght, or should i say electron movement after disconnection (and we miss the rising voltage across the coil with reverse polarity, as the current stop, that will be the peak of the voltage).

In this case what he calls this phenomenal electromotive force is none other than the electrons in the coil gathering at one end of the coil. The electrons in the coil were forced to a circular motion with great centrifugal force making them move on and above the surface of the wire. At the moment of cut off, nearly all the electron will stop almost immediately in the straight wire, but in the coil, because of their given inertia they can move with a much more free mean path on the surface, and stack for a moment at one end of the coil causing an electron surge there and a deficit/absence at the other end (or generaly in the whole coil), what you can measure. Of course if it is not directed elsewhere and sufficiently large enough, it will tear your break(switch..etc) in the circuit along with the electric components. If not, it will just settle in a while in the coil (after all its just a shortcut with negative charge at one end and 'positive' at the other in the moment the electrons movement cease).

It is an amazingly twisted way to say for a bunch of still moving electron in the coil after disconnection, that gather at one end leaving a void at the other, that a mysterious electromotive force a.r.i.s.e.s. and run a current (so there are more than one current in the coil?) to oppose the flux change, meaning strengthening the decaying current, maintaining the magnetic field, what is the product by the way of the moving electrons, which are stopping now.

From this you can see that any sentence stating any current, that want to act against the flux change is a badly interpreted misconception. The collapse of the magnetic field is the stopping of the electrons, it doesnt have any or little influence on the current itself (nor in the 'generating' voltage spike), you can't hack the cause-effect relation, no matter what game you play with words. And just as bad the popular supression of this so called 'backemf'. ANYTHING that is not radiated or lost in some other form can be harnessed back from the coil cutting your operating loss by anything between 50-90%, with a diode AND!! a storage element (capacitor, battery..etc). Like a car which have a 'regenerative braking'.

Needless to say, pulsed DC have numerous advantage over AC for inductive loads, which mostly act against itself for the above mentioned reasons (electron movement/inertia) the higher the frequency (called impedance). It is the worst design/idea ever to work coils with AC. Like throwing out more money, the harder you work. There would be no need for power factor corrections and your punny houshold electrics wouldnt suck 2000W from the grid, while doing 800W or less useful work... (Have to say here AC, specially high frequency can have its uses, for example the free resonance of a (R)LC circuit)

Conclusion: - Coils never induce anything in themselves, and if you dont belive me grab a scope or any meter and measure what you belive an increasing current in a coil generate ahead or after itself working against the change at any part of the coil, and post it please.

Tip: A correctly constructed and operated coil is a current amplification device. Even the 'sample answer' diagramm showing the current with red line in the question above show extra current, modifying the measured current in the circuit. (I wont tell where, its your homework :)

With correct physical-geometric form and engenieering you can have a vast variety of effects for the same electron movement (current). This in itself should be a very exciting major in scientific study.

If you are open minded and looking for answers what you can't get from those forums, or from scientific teachings, which taught the people answering here ,(curios about what are the magnetic fields, electrostatic forces and how they work in general) i recommend you a book titled: The Ultimate Reality by Joseph H. Cater. Just read the part you are interested, and if more question pop up than read that part too.

Not the answer you're looking for? Browse other questions tagged electromagnetism electricity electric-circuits electric-current electromagnetic-induction or ask your own question.

2
Magnetic fields in transformers and back emf?
4
Can Lenz's rule really be used to determine the direction of induced current?
0
What is magnetic flux? How is it related to Faraday's law?
2
How doI find the average induced emf in a coil given the rate of change of flux density, and the area of the coil?
1
Magnet falling through a coil that does not form a circuit. Am I wrong or is the mark scheme?
0
Magnetic flux inducing EMF
0
Self Induction: Why does light bulb flash when circuit switched off and not when switched on?
0
In an AC inductive circuit, the applied voltage is equal to the back emf?
0
Back emf when circuit is closed and opened and the conservation of energy