This question showed up in my particle physics exam and I'm not sure of the answer. I said no, since I can't see any reason why they must be equal. But I my answer is right, I find it odd that it's just a coincidence that they're both 3.

In the quest for such a model(s), first lets rephrase your question is the following way:

Is there any extension of the standard model be possible where the number of fermion generations can in any way be explained through the internal consistency of the model? (since we don't have the answer within the framework of SM.)

Its good to start from SM itself. Lets go back in sixties. If we make a table of fermions, those were discovered up to 1965, it would looks like:

The very existence of three generations of quarks is necessary for CP violation. And also for anomaly cancellations to make the SM mathematically consistant. But the undeylying symmetry (if it really exists) which may ensure the equal numbers of quarks and leptons, yet to be discovered.

Story that goes beyond SM: Back in nineties an extension of SM was proposed by F. Pisano here and V. Pleitez based on gauge group $SU(3)_{L}\times U(1)_{Y}$. Their model to accommodate the standard fermions into multiplets of this gauge group which must include some new fermions.

This model has remarkable feature. As we already know that, a consistent quantum field theory must be free from gauge anomaly. Without that, theory become ill. In case of SM the anomalies get cancelled in miraculous (or should we say in an ugly way?) way. But for the model with gauge group $SU(3)_{c}\times SU(3)_{L}\times U(1)_{Y}$, has the interesting feature that each generation of fermions is anomalous, but that with three generations the anomalies cancelled.

(For technical detail one can read this paper). But with the cost that we have to incorporate a right handed neutrino in the game. In fact, one may find other different models with the same features.

GUT considerations: In a recent paper Pritibhajan Byakti et al proposed a grand unified theory based on the gauge group $SU(9)$. The model uses fermions in antisymmetric representations only and the consistency of the model demands that the number of fermion generations is three. Nevertheless like all GUT, it also come up with some superheavy gauge bosons. Which can trigger baryon number non-conserving processes.

The upshot is, perhaps we would be able to explain the lepton-quark symmetry with the price of some new physics (may be new particles) which lives beyond the SM.

This question showed up in my particle physics exam and I'm not sure of the answer. I said no, since I can't see any reason why they must be equal.

But I my answer is right, I find it odd that it's just a coincidence that they're both 3.

It probably is not a coincidence, but a consequence of some underlying undiscovered symmetry. However, there is no current human physics law which requires the same number of quark and lepton generations.

We don't know why they balance in number, as humans we like symmetry and balance, but whether nature likes them as much as us, we don't know. It might be a coincidence ( it's probably not), but again we could discover something tomorrow that "distorts" the system.

It seems necessary that there are 3 of each for our current standard model of understanding forces to work, but that could change at any time, or not for a long time. 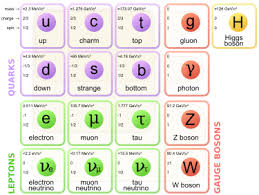 A more detailed, interesting and much better informed similar question is Quarks and Leptons

Not the answer you're looking for? Browse other questions tagged standard-model quarks leptons or ask your own question.

17
Origin of lepton/quark generations?
22
Why do some anomalies (only) lead to inconsistent quantum field theories