Which Photon would win the race? 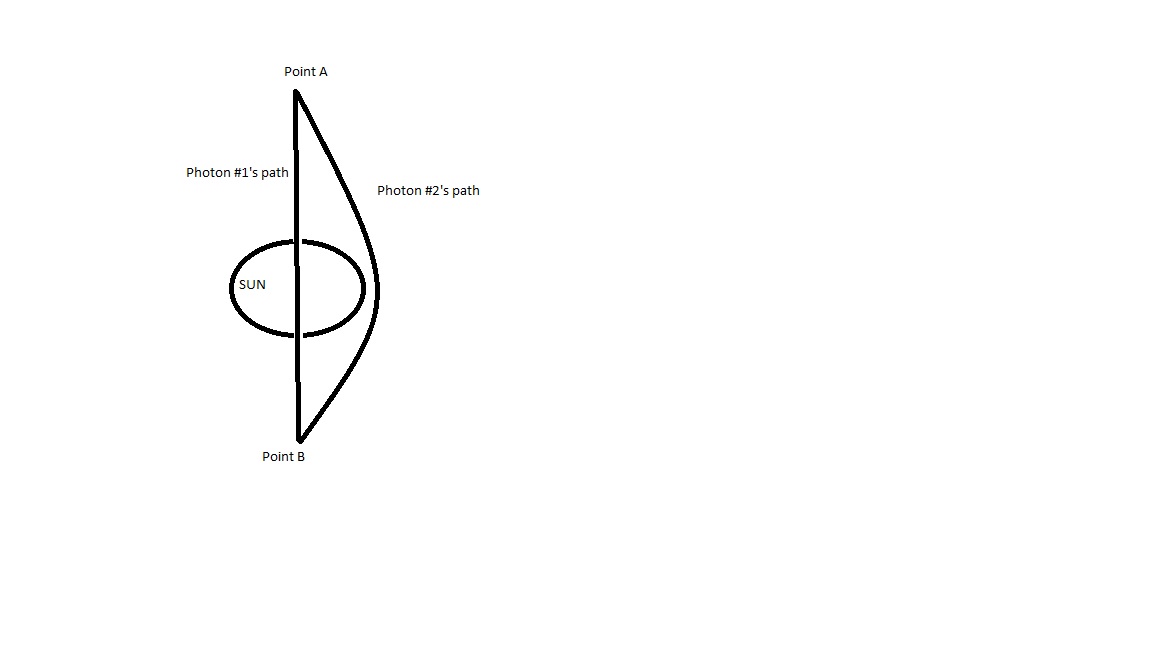 Imagine that the Sun is not rotating. It also has a tunnel throughout its body exactly through the core. Please disregard any other effect then gravity. From a far away point A (far from the Sun) I would shoot two entangled photons, one through the tunnel, and one a little bit next to the Sun (so just to pass next to the Sun). Point B is so that the line from point A to point B is on a straight (in 3D) line through the tunnel.

Now I am shooting the photons at an angle, such that both entangled photons will pass through both point A and B. (given GR/SR bending effects, the photon#2's path will be bent just right to pass through point B.)

It seems to me that your central question is: Does the particular lensed path light travels on affect its arrival time? If so, the answer is a resounding yes, with evidence from astronomy! For example, the Twin Quasar (https://en.wikipedia.org/wiki/Twin_Quasar) is a system consisting of two images of the same quasar, which traveled different paths to the observer and hence generate two different images. The interesting part of this is that one of the images is 400 days behind the other! Researchers identify this difference with a path length difference of 1.1 ly. So it seems that the photon with shorter path length (i.e. photon #1) would win.

To anticipate some attacks involving the fact that space is curved around a massive object and so maybe photon #2 wins, I say that the problem never provides dimensions, in particular the vertical separation between points A and B. Take those two points far enough away from each other, and it becomes extremely clear that, at least in this limit, photon 1 wins. At that point the total relative alteration to photon 1's path becomes miniscule, but photon 2 still has to travel in quite a large arc. My argument here is that since the Sun is (hopefully) not (yet) a compact object, but instead has a rather low density, significant curvature will not be seen within its body. Therefore, the same gentle-curvature limit should apply in all reasonable cases.

I think I have half of an answer for you. Following my old question about the reactionless drive (deleted now), I've worked out a formula for Shapiro delay in a straight line, through a tunnel in the mass.

$R$ is the radius of the Sun

$c$ is the speed of light

The delay is from $X$ (in your drawing is $A$) to the center of the mass, so if you want to go to point B you have to take twice the time. After that, you have to get the Shapiro delay around the mass (actually, it is better to start with the path around so you can get the $A$ and $B$ points) and compare it with my formula.

My formula assumes that the density of the mass is constant (it matters when the photon goes inside the mass; when you get around it the density does not matter).

From my experience there is no straight answer to your question - it depends on the density variation of mass and the distance from which you launch the photon. You can have a winning photon either way.

Extreme value observations are a good way of making estimates.

As Misuser has already stated, it depends on the concrete parameters.

Not the answer you're looking for? Browse other questions tagged general-relativity or ask your own question.

1
Is a photon going through a center of mass affected by time dilation more then another going around?

4
Why do light and masses (like planets) follow different paths through curved space?
6
Gravitational lensing of gravity
0
Does a photon box have gravitational potential, and cause GR time dilation?
0
Time for a photon to pass through a massive body
39
Why does the speed of an object affect its path if gravity is warped spacetime?
0
Could a photon interact with itself disrupting its path?