Can a star collapse into a black hole before it finishes burning its hydrogen fuel?

That's not the way massive stars evolve. Since they have high mass, they do not need to contract so much to get to fusion temperature, so they are actually much farther from being degenerate than stars like the Sun (which is already pretty far from being degenerate). Also, as long as there is hydrogen in the core to fuse, the star will not suffer a net loss of heat-- the fusion will replace any heat being lost. With no net loss of heat, there is also no contraction, and no movement toward higher degeneracy. So the answer to your question is no-- massive stars will not collapse into black holes as long as they have hydrogen to fuse, because collapse requires a net loss of heat, and fusion prevents that. Formation of supermassive black holes is rather different-- that could happen without the hydrogen ever getting to fusion temperature until the black hole has already swallowed it.

The sequence of events is that an inert (iron) core is compressed and is electron degenerate. As more iron is deposited from an Si burning shell then the core grows beyond its Chandrasekhar mass and it collapses. The collapse may be halted providing the neutron degenerate material is only having to support less than 2-3 solar masses. Any more than this, then collapse to a black hole seems inevitable.

A further factor to consider is how your neutron degenerate core could form. There can be no smooth, quasi-equilibrium transition between electron degenerate and neutron degenerate material because neutronisation ensures that the adiabatic index falls below 4/3 (the threshold for any kind of stability) at densities between about $10^{13}$ and $10^{17}$ kg/m$^3$. That is why neutron stars are much smaller than white dwarfs and why the formation of a neutron degenerate core releases vast quantities of gravitational potential energy and causes supernovae.

Other answers have detailed why a ~50 solar mass star won't create a black hole while still burning hydrogen. However, this can sort of theoretically happen with big enough stars.

A quasi-star is a theoretical star of more than 1000 solar masses, that may (or may not) have existed among the very first stars of the Universe, and could be an origin for intermediate-mass black holes.

For massive stars, the extreme temperatures in the core of the protostar would blow away the remainder of the still-accreting gas, and limit the mass of the star to ~150 solar masses. But above ~1000 solar masses, the still-accreting mass is big enough to overcome radiation pressure and solar winds and keep falling, until gravity is enough to form a black hole in the core of the protostar.

With a lifespan of a few million years, bigger than Neptune's orbit and as bright as a galaxy, they would have been rather spectacular.

There is a lot of good information in @KenG's answer, but it does somewhat miss the end result, I think. Yes, we do think that a star can collapse to a BH before completely expending its Hydrogen. The requisite for collapse depends on the conditions in the core: you need to reach an Iron core (with sufficient mass), in which you no longer have fussible material, and eventually cannot support itself. This can happen while there is still hydrogen in the envelope, and indeed, that should generally be the case as hydrogen burning will often still be occurring in outer shells. See for example the attached figure. 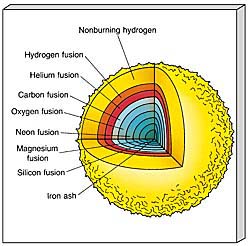 Not the answer you're looking for? Browse other questions tagged black-holes astrophysics stars stellar-physics stellar-evolution or ask your own question.