On the existance of black holes

Two characters, Alice(overused name for contexts like these) and Jake are in space next to a black hole(BH). Now if Jake's position is fixed in space and Alice gets sucked by the BH, in Jake's frame of reference, one would see Alice moving towards the BH forever. The closer Alice get's to the BH's horizon, the slower she would appear to move. After some time, when Alice reaches the horizon, Jake sees her freeze. Alice remains plastered there, motionless, stretched across the surface of the horizon as the heat begins to engulf her. With respect to Alice's frame of reference, she is long dead. Time ticks slowly around a BH, as it 'bends' space-time.

A crude picture of the setup: 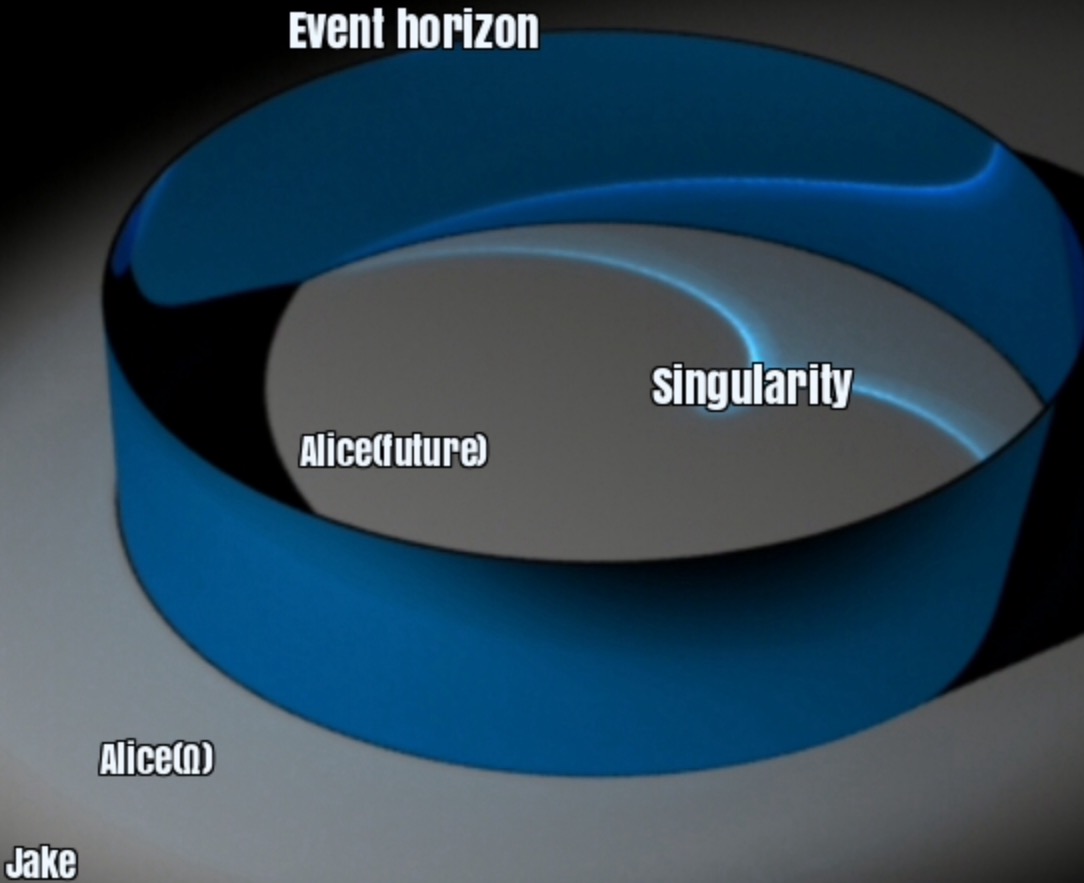 1. With the above being said; before the Alice plummets into the BH, before she moves towards the BH and before she separates from Jake. Would Alice inside the BH(her future self) at ε be able to obtain Alice's and Jake's information from Ω and α, respectively?

Part A: If Hawking's theory is true then the life of the BH is well defined at ε, and it would eventually die, but never at Ω, hence according to the universe the information of space being occupied by a BH becomes unknown and BH's don't exist from the universe's frame of reference.

Part B: If the universe is aware of the BH's existence and its lifetime(let's define a time space:"Now"), then doesn't it mean that information has travelled(from ε to the universe) faster than the speed of light providing information about the BH's future?

Please note: I spent a lot of time thinking about the following, and even more time thinking whether to post this on SE or not. I might make sense to you or might come across as 'terribly confused'. Any reflection would be much appreciated.

No, the universe is unaware of the existence of the BH, nor of any of the space inside the horizon -- actually all the spacetime the BH occupies is disconnected casually from the rest of the universe. A perpetual BH always existed and always will, and the spacetime it occupies (and all 'within' the horizon) is just not part of our universe.

A real (non perpetual) BH is almost the same, we actually can't note a difference, except it is in an infinite process (from our point of view, due to time dilation) of forming. For all 'practical' purposes they are the same. We just cannot see the spacetime inside.

The first part, as Benjimin said clearly, Alice's time is very limited. The falls towards the horizon, goes through it, and she then falls into the singularity in a very short period of time.

The two merging black holes first ever detected merging in 2015 had their final merger phase happening in 1/4 second. The final part of the gravitational wave detected was their merger. It shows how fast it happens, for two massive bodies, each more massive than 20 solar masses, falling into each other.

See about two black hole mergers, and information on the first discovery at https://en.m.wikipedia.org/wiki/First_observation_of_gravitational_waves

See the simulation at https://m.youtube.com/watch?v=I_88S8DWbcU

Alice has no chance.

As for information loss, as of now there is still no solution. Hawking's finding that BHs evaporate by emitting radiation which tunnel out of the BH through a quantum process (so it is a quantum effect, pure general relativity without a quantum field to treat would have no mass evaporating). Also, his calculations showed that the radiation coming out was random, un correlated with anything, so it was not the information that went in. But it was a pseudo-quantum treatment, the field was quantum but gravity was classic. Not a full quantum gravity treatment. People have been trying to figure it out, no real success yet. Hawking published a paper with 2 colleagues early in 2016 Where he found that there are, other conserved quantities in horizons, he called them 'soft hair', that they claimed may be, after a full quantum treatment (which they only did partially, and admitted it, so they couldn't show what they wanted to), may be where the information going into the black holes is actually stored.

It's not been proven, and other people have tried to find ways in which what comes out of the black holes, during evaporation, carries correlated information from the mass falling in. Another approach has been to try to use the AdS/CFT correspondence to show that the information is in the horizon. So far there's been no real resolution.

If there was no Hawking radiation, the black hole would never evaporate.

If the black hole does evaporate, it suggests that information that went to the event horizon has come back (in scrambled form) from the horizon again. It is probably safest to assume this information comes from no deeper than the horizon and thus didn't exceed the speed of light (and can't relay messages from the interior, except in so far as by the holographic principle you can predict what would have happened in the interior if you somehow unscramble perfect information about what went in). But you are starting to approach questions that will be unanswered until physicists learn more about quantum gravity.

Not the answer you're looking for? Browse other questions tagged black-holes time-dilation information or ask your own question.

0
Understanding Black hole information paradox?
1
In black hole complementarity, does Bob literally observe Alice's death?
1
Black Hole horizons and the Equivalence Principle?
3
What if looked inside a moving spaceship, from Earth?
4
Bob sees Alice never reaching the event horizon. What does Alice see when looking at Bob?
1
Bob and Alice - can Alice save Bob from the black hole with a very long pool skimmer?