I'm designing a throwing target that will behave like a person when struck. Nudge it and it won't noticably move. Hit it decently, it will lean a little and then return to it's original position, like person would just take a step back. Strike with all you've got and will fall backwards.
I'm looking for equation that will determine force needed to topple given design.

I've decided on triangular cuboid laid on its side as base (see pic). It will prevent any sideways movement and gives a window for back-and-forth movement.
I can see that there's more than one way to set that up, but i need to avoid unreasonable height or mass. For that i need equations to tinker with, that I can't come up by myself. 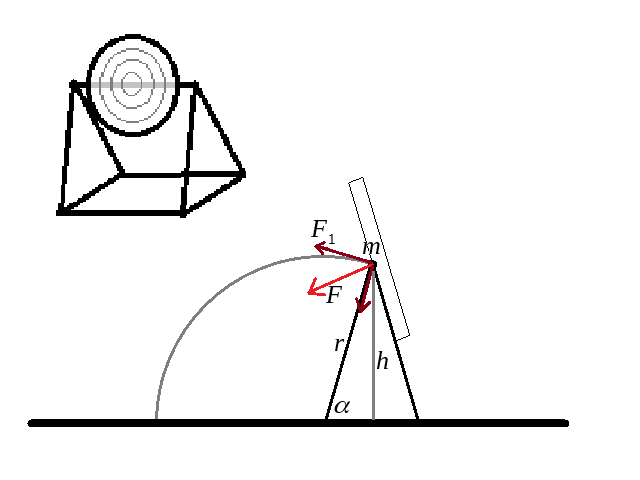 There's a lot more to this question than OP imagines.

If $F$ was a continuous force, then from the geometry and with trigonometry $F_1$ could easily be calculated:

This creates counterclockwise torque about the forward pivot point of the stand:

Which tries to topple the stand.

Then angular acceleration around the forward pivot point will occur, as per Newton. The ensemble will topple because as rotation proceeds, $\tau_2$ actually vanishes.

But that's far from the end of it.

I'm designing throwing target that will behave like a person when struck.

This suggest that the target will be struck by a mass bearing projectile. In that case $F$ is not constant but an impact force or a short-lived impuls. The size and duration of it cannot be calculated accurately or easily because they depend on how elastic the collision is: I assume the projectile will bounce off the target (only in the case of a very sticky target would that not be true).

Possibly the easiest approach would be to assume the projectile transfers some of its kinetic energy to the ensemble, so that it will have a certain amount of rotational kinetic energy $K_R$, immediately after impact:

Where $I$ is the inertial moment of the ensemble about the forward pivot point and $\omega_0$ the angular velocity of the ensemble, immediately after impact.

Since the ensemble is now rotating, the previously mentioned $\tau_2$ provides a decelerating torque:

As the point $m$ increases in height during rotation, its potential energy $U$ increases. When the forward bar has become vertical, the height increase $\Delta y$ is:

$$\Delta y=r-h\:\text{with }h=r\sin\alpha$$ And the corresponding change in potential energy is:

As during the rotation rotational kinetic energy is converted to potential energy, the ensemble will topple if:

This is the condition for toppling.

Let's assume a projectile of mass $M$ is thrown at the target at speed $v$. Its kinetic energy would be:

Now we assume a fraction $\epsilon$ of this is transferred to the ensemble. Its rotational kinetic energy $K_R$ would then become:

The remaining fraction of kinetic energy would be carries off by the bouncing projectile:

And the condition for toppling:

The problem remains to find a useful expression for $\epsilon$ from all relevant parameters.

5
Is the Normal force dependent on the density of the object the body is resting on?
3
Confused about Newton's 3rd law
2
Max damage to target by projectile
4
What would a force position chart look like applied in real life?
0
Normal force on a person