Are White Holes the inside of Black Holes?

I read about a theory that says that The Big Bang could be actually considered a White Hole.

Well one seems to be the boundary of each other. If i am inside a black hole, the surface outside does fit in the White Hole description. So what if a white hole is actually not a hole but is the external surface of a black hole from inside?

What if its true that our Big Bang is actually a white hole, or actually the inside of a Black Hole?

I include below a Penrose diagram of the Schwarzschild black hole. This illustrates the split horizon condition of a black hole, where the $r~=~2GM/c^2$ condition separates the black hole from the so called white hole. This gadget at first blush suggests that particles gush out of white holes and then later enter a black hole. However, this is an abstract device and not something which describes an astrophysical black hole. A quantum fluctuation right at the junction between the 4 types of horizons designated in this diagram is a loop that encloses the "X" or "cross." An observer in the region called "universe" on a surface of constant radius from the black hole observes particles emerging from the horizon and then falling back down. If the observer interacts with these particles they can be observed as Hawking radiation. 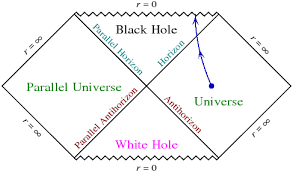 This is a rather abstract way of looking at the physics. The quantum loop conclusing the central X means that the universe and parallel universe have identically prepared black holes composed of entangled states. This is one way that general relativity appears to have some quantum features within it. This has interesting multiverse implications, and is a way of looking at the quantum monogamy problem in an open world perspective. Of course in reality a black hole we observe is entangled massively with particles in the observable universe and maybe with other cosmologies in the multiverse. This "messiness" means that we can simplify this diagram to the truncated form as seen below. The function $R(t)$ represents the surface of a star, a messy statistical object, that implodes to form the black hole. There the spatial surface $\Sigma_1$ is continuous into the black hole and the spatial surface $\Sigma_2$ occurs after the black hole has quantum mechanically decayed away. 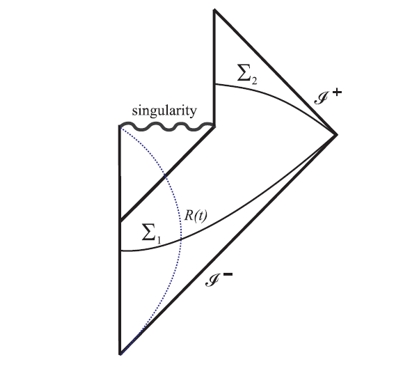 The white hole is then really an abstract manifestation of the ultimate time symmetry of general relativity and a signature that black holes are associated with absorbing and quantum radiating particles. It is not likely the case that large white holes with astrophysical implications actually exist.

A black hole is very reachable from the outside. Once inside you can't get back. You quick fall to the center and are crushed at a singularity.

A white hole is a black hole running backwards in time. If you are inside, you can't avoid being expelled away from the singularity to the outside. Once outside, you can't get back in.

The inside of a black hole is not another universe.

Not the answer you're looking for? Browse other questions tagged cosmology black-holes universe big-bang white-holes or ask your own question.

0
Are black and white holes linked?

50
Are we inside a black hole?
0
Is there a relationship between Black Holes and the Big Bang?
0
A few questions about white holes
1
If the Universe were a white hole, how would inflation fit in