Voltage is to be calculated through a path between points $A$ and $B$. The path travelled can either be from $A$ to $B$ or from $B$ to $A$. Don't consider KVL conventions as this is not a loop.

Does the direction affect the final voltage value?

If we go from positive terminal to negative terminal of the cell, is the voltage taken to be positive ? or does it depends on what convention we want to follow?

Is this correct? And if a resistance is also connected between the path, what sign convention is the voltage drop IR given?

For cells there can be no ambiguity about the potential differences across the cells.
When na ideal cell is labelled $3$ V then it means that the cell will maintain the positive terminal a potential which is $3$ V higher than the negative cell.

The first possible point of confusion is the labelling of the voltages.
For some $V_{\rm AB}$ means the change in potential in going from node $A$ to node $B$ whereas others will say that is the potential of node $A$ relative to node $B$.
I think that you are using the first convention?

Consider your arrangement of cells. 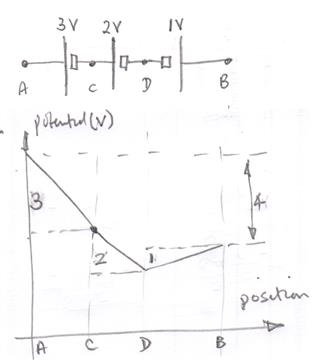 Although you said that you did not want to use KVL as there was no loop, there is in fact a loop although in this case the loop from $A$ to $B$ which has an infinite resistance.
So using KVL which is a really a convenient form of the law of conservation of energy we can walk around a complete circuit with a charge and have no net work done on the charge.
The direction of the walk does not matter.

Going around the loop in the opposite direction gives the expected result $V_{\rm BA} = +4$V.

For a resistor the current always flows from the node at the higher potential to the node at the lower potential.
However there may a difficultly in assigning a current direction in a complex circuit.
This should present no difficulties if one is consistent with whatever convention is being used as is illustrated in the trivial example below. 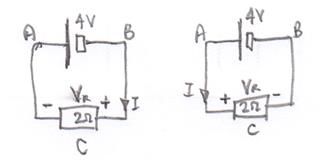 Not the answer you're looking for? Browse other questions tagged electric-current voltage conventions or ask your own question.

6
Sign conventions for voltage drop and gain in circuit
0
Choosing sign for KVL (mutual inductance)
2
The Difference Between voltage and current
1
Voltage - Energy drop
1
Voltage Drop Across a Resistor / Direction and Sign of Voltage
0
Why does the voltage drop in a cell increase if a heavy current is drawn from a cell?
0
What is the sign of voltage if I move from the positive part to the negative part?
0
What sign conventions are used here? Geometrical optics
0
Does Resistance Affect Voltage?
0
Voltage in circuit