Why will the increase in the sun's luminosity accelerate with respect to time?

At present, nearly half the hydrogen at the core has been consumed, with the remainder of the atoms consisting primarily of helium. As the number of hydrogen atoms per unit mass decrease, so too does their energy output provided through nuclear fusion. This results in a decrease in pressure support, which causes the core to contract until the increased density and temperature bring the core pressure in to equilibrium with the layers above. The higher temperature causes the remaining hydrogen to undergo fusion at a more rapid rate, thereby generating the energy needed to maintain the equilibrium. 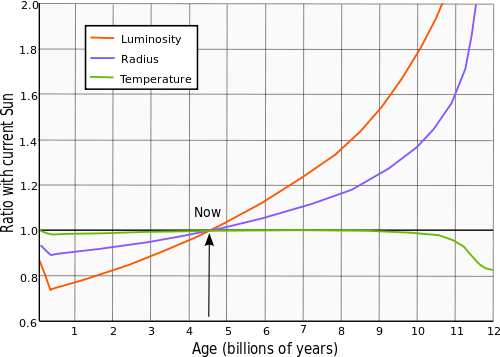 So mathematically speaking, what in the fusion-burning equations suggests that the Sun's luminosity will accelerate with respect to time?

It is reasonably straightforward to show (e.g. see p.105 of these lecture notes) that the luminosity of a main sequence star like the Sun, depends only on its mass and its interior composition and opacity: $$ L = \frac{\mu^4}{\kappa}M^3\ ,$$ where $M$ is the mass, $\mu$ is the number of mass units per particle in the interior and $\kappa$ is the average opacity in the star.

The process of nuclear fusion turns 4 hydrogen nuclei (protons) into a helium nucleus. If we take 4 protons + 4 electrons (for neutrality), then $\mu=1/2$. For a gas of pure helium we have one helium nucleus plus 2 electrons and $\mu = 4/3$ thus as the core of the star turns from hydrogen to helium then $\mu$ increases.

Thus $dL/dt$ depends on $L^{7/4}$, which means that as the luminosity grows, the rate of change of luminosity increases significantly, since $M$ is constant.

This is a multi-stage problem. First, You have to agree with the fact, that the more the core contracts, the more the total energy radiated by it will be high. This results from:

So the more a "usual star" is compact, the more it will radiate energy. This is not true for white dwarfs, because it is degenerescence pressure of the electron gas that keeps it from collapsing. To comment about the radiuses of stars, as there is more radiated energy, either the star becomes bluer (blue giants), or it becomes bigger and keeps the same surface temperature, or less, which will happen for the sun (will simply inflate, then become a red giant). Now about the fusion reactions: their dependance to temperature is very, very sharp, sometimes T^17 locally. This means that only a relatively small contraction of the core will be enough to rise temperature enough for the fusion reactions to accelerate enough to...sustain the temperature, although radiated energy has increased. As you can guess it, the radiated energy, when the density distribution does not change a lot, must be in equilibrium with the energy from nuclear fusion. So as there is more radiated energy (more luminosity - if the neutrino emission rate keeps constant, as it is the cas while the primary reaction is still H+H->He), there must be an increased rate of burning Hydrogen.

All I said is true with a constant overall Hydrogen destruction rate. As I said, radiated energy increases, so the Hydrogen must be consumed faster and faster: luminosity will accelerate even faster because of that.

Finally, when main fuel changes from Hydrogen to Helium, the energy released per unit mass will decrease, so the contractions of the core will become more intense, accelerating...the acceleration.

I hope I didn't make too many mistakes in my speech, I am not very familiar with astrophysics, only had some lectures about it. And I hope it is...understandable!

Not the answer you're looking for? Browse other questions tagged astrophysics sun stars stellar-evolution or ask your own question.

10
What is the actual energy content of the Sun?
0
Planetary nebulae, thermal pulses and mass loss
2
How do inert helium cores in sub giant stars create a pressure force?
2
Why does the core of a low mass star contract after reaching electron degeneracy?
0
Query about the evolution of the sun, from hydrogen shell burning to helium flashpoint
5
Why do later fusion stages in a star last shorter?
19
Why do main sequence stars get bigger and more luminous as they age?
0
What will be the mass of the sun when the core is depleted of hydrogen about 5 billion years from now?