Rutherford-scattering can be described as:

As we can see, the mathematical function is undefined at $\theta = 0^\circ$, but I am curious what happens physically at this singularity.

My guess would be that, the case of $\theta = 0^\circ$ is impossible, because the particle had to go through the target's nuclei. On the other hand, couldn't it tunnel through the nuclei?

And another question: shouldn't the cross section be infinite for $\theta = 180^\circ$ since the particle "bounces back" ?

In a classical treatment of electromagnetic scattering (which is what Rutherford used, since the relevant parts of quantum mechanics hadn't been invented yet), there's a one-to-one relationship between the final scattering angle $\theta$ and the impact parameter, usually called $b$: 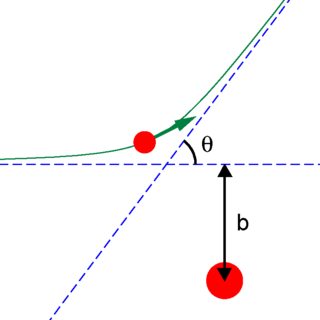 The differential cross section for forward scattering (that is, $\theta=0^\circ$) diverges, because you get zero-angle scattering in the limit of large $b$, where the alpha particle and the nucleus don't interact very much at all. There's just an awful lot of ways to miss the nucleus and go straight.

Likewise, you only get $\theta \approx 180^\circ$ for a very small range of $b$ near zero, which is why the cross section has a minimum (but doesn't vanish) in the backwards limit.

Rutherford model for scattering explicitly assumes that the $\alpha$ particle does not actually penetrate the nuclear region, so that the particle and the nucleus (both assumed to be spherical) act like point charges as far as the Coulomb force is concerned.

To answer your question, yes of course there is a non-zero probability of the particle tunneling through the nucleus for $\theta=0^\circ$. But we are not concerned with that quantum mechanical effect while calculating scattering angles and other parameters.

For the second part, technically not true since you may have already guessed by putting $\theta=180^\circ$ in the formula. I think you should look how the differential cross section is defined-

This is the differential cross section; finite for all allowed values of $\theta$

Whereas the total cross section IS infinite given by

That the total cross section is infinite just means that every charged particle that passes by the (bare) nucleus is scattered to some extent.

Not the answer you're looking for? Browse other questions tagged particle-physics nuclear-physics scattering or ask your own question.