Why does a full moon seem uniformly bright from earth, shouldn't it be dimmer at the "border"?

I know the moon is not uniformly grey, it has details, craters, it's not just a colored uniform circle from earth, however, when in a full moon, the intensity of the light received from different parts of the "disc" seems very similar.

Let's define the "border" of the moon as the geographical region that, during a full moon as seen from earth, corresponds to the, as seen from the earth, external close the perimeter zone of the territory of the moon. At those places the sun is close to the horizon from their perspective.

This seems to contradict a piece of intuition I have: from the point of view of the moon, the "borders" (what we see in the border of the disc at full moon) are at "sunset" or "sunrise" so, they have less light. As normal experience of living in the earth, the most light and heat you receive from the sun is at noon when it's at cenit, and when the sun starts inclining towards the horizon, the amount of light per meter squared decreases, and thus the floor shines dimmer. That's why I expect the "borders" of the moon to be dimmer than the center during a full moon.

Hypothesis to solve my confusion: Actually, the borders indeed receive less light from the sun because they are tilted with respect to it, but then again, in full moon they are tilted with respect to us also! So to us even if each meter squared receives and thus reflects less light, it is tilted to us it covers a smaller solid angle, so in turn it seems brighter. And since it's the same factor, it should compensate exactly.

If the moon were a uniform sphere, it would indeed appear dimmer at the edges of a full moon.

Surface roughness is the main reason the edges are not as dim as the sphere model predicts. When viewing a full moon from earth, the light is coming from nearly behind us. That means the edges of the full moon are illuminated by sun rays nearly parallel to the lunar surface. Now consider what on the moon those rays are going to hit. Just like here on earth at sunrise or sunset, vertical objects facing the sun will be better illuminated. When the surface has roughness, more of the glancing sunlight will hit more vertical parts of the surface.

What we are seeing at the edges of a full moon are predominantly the walls of craters, sides of rocks, and the like that are oriented towards the sun and therefore towards us. This more flat-on average orientation reflects significantly more light than a smooth-sphere surface would.

I've wondered the same thing, why the edges of the full Moon don't look darker, and why the terminator for a quarter-Moon phase doesn't look dimmer than the point at the edge of the Moon that is opposite the Sun. It isn't a foreshortening effect, as in your last hypothesis, that actually doesn't work. If the Moon's surface were uniformly bright in all directions, like a ping-pong ball perhaps, then the dusk and dawn regions, which get less illumination per square meter, should indeed look darker. It has to be something about the roughness of the Moon that is not uniformly bright in all directions. The foreshortening effect, whereby we see larger areas at the edge of the Moon, just doesn't work like that, we see the brightness of the surface not the flux per unit area from the surface (and brightness is per solid angle, so it's the solid angle we are seeing that counts, not the Moon surface area within the pixel).

Another possible effect to bear in mind is the way the eye sees contrast-- it tries to limit small contrasts when there are much larger contrasts in the field of view. So it's possible the surface is not as uniformly bright as it looks. I don't know about that, so let's say for the purposes of argument that the full Moon is uniformly bright, even though the edges get less solar illumination per square area. That would require that the brightness sent out by the Moon's surface is not uniform, but rather peaks along the direction that the sunlight comes from. That peak would have to be especially pronounced when the sunlight comes from a steep angle.

There is actually independent evidence that the brightness of the Moon does indeed peak along the direction of the incident sunlight-- it is well known that the full Moon gives the Earth about ten times more illumination than the quarter phase Moon does, even though the illuminated area is only doubled. It's a roughness effect. Many road signs are intentionally built to do the same thing, so they reflect light preferentially back toward oncoming headlights. The Moon is acting like a spherical version of those road signs.

For the full moon, the answer in the OP is clearly correct, as others have confirmed: the brightness is related to the solar energy per square foot, and when viewing from the front, the square feet increase as you go towards the edge at the same rate that the solar energy per foot fades. This assumes that reflections are omnidirectional (as with matte dust rather than a polished sphere), but this seems a reasonable assumption about moondust.

There remains the question that others have asked: if the above is correct, and brightness scales down from the center of the side facing the sun ("midday region"), down to the edges ("twilight region"), then why is the cutoff we see when looking at the half moon so very sharp? Shouldn't it gradually fade off?

My suspicion is that it's a brightness/saturation thing. 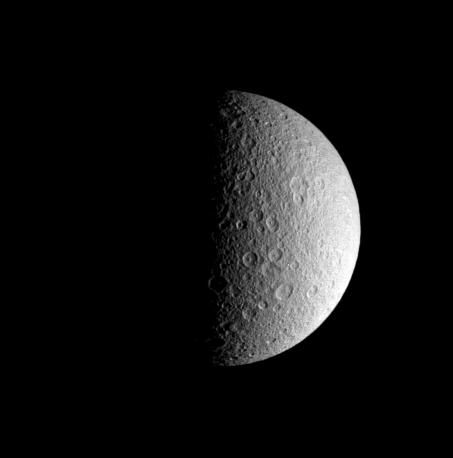 Here's our own moon: 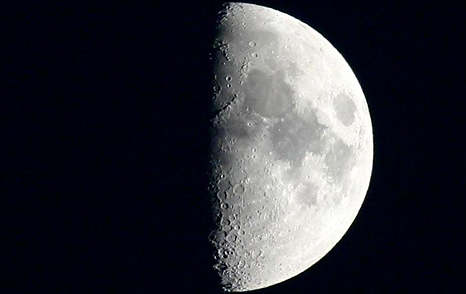 Notice how the former, much further away from the sun, has a far slower cutoff?

I believe it's because the very brightest point is far dimmer sunlight: it's about ten times further from the sun, which means, by the inverse square law, that it's about 100 times dimmer out there.

So I think it's just that our vision is saturated. If we take that lunar picture and desaturate it by increasing contrast by 65% while reducing brightness by 70%, we get... 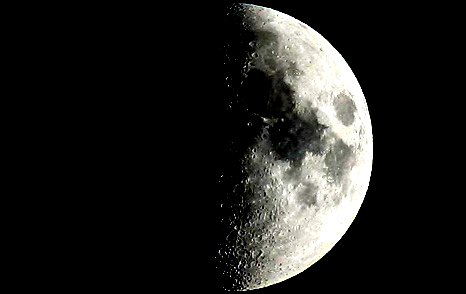 Which is much more like the first, I feel, though it's clear that a lot of the levels have been lost.

Not the answer you're looking for? Browse other questions tagged visible-light everyday-life moon or ask your own question.

6
Why does the moon stay with the Earth?
5
Why isn't the time between apogee and perigee constant?
1
If it was possible to attach a carbon nanotube rope between the Earth and the Moon, how could it be used to collect energy?
36
If the moon had a mirror surface, would the earth be equally illuminated as by the sun during full moon, or would it require a different mirror shape?
4
Why is a bright night sky dark?
33
Why is the sky *uniformly* blue?
0
What's the time window for total and narrow eclipses?