If you have a small water turbine and a larger water turbine in a river, would the larger turbine produce more power or would they produce the same because of the equal speed of the river?

If that power is considerably larger than the power drawn by either the small turbine or the large turbine, then both turbines would provide power proportional to their power ratings (their 'size', if you will).

A river could never deliver more power $P$ than it contains, so the river's size limits the turbine's maximum theoretical size (power rating).

The power generated by a turbine, in wind or water, is given by the rate at which the kinetic energy of the fluid is captured by the turbine. This depends on the mass of fluid crossing the turbine, and the fluid's speed. The mass of fluid crossing the turbine is dependent its size and so, all things being equal, the larger turbine generates more power. Not surprisingly, the generated power is proportional to the area swept out by the blades (i.e. that "circle"), and this relationship is obeyed quite well by real wind turbines.

To expand slightly upon Gert's answer:

As they said, so long as the effect of the turbine is small compared to the flow through the channel, the energy removed from the flow is proportional to the cross-sectional area of the rotor and a "power coefficient" that represents the proportion of the kinetic energy passing through the rotor that is removed. In renewable energy fields this is usually written as,

That works nicely, so long as what is removed is much smaller than that which is left alone. But beyond that point, tidal turbines start to behave less like wind turbines (which can only ever occupy a tiny fraction of a notional cross-section of the atmosphere) and we see effects from blockage: the additional impedence of the turbines causes the flow in the channel as a whole to slow down. This leads to a decrease in the marginal power gain for each turbine added (i.e. diminishing returns), and eventually to a negative marginal return from extra turbines (i.e. adding more turbines gets you less total power). See this plot for an illustration: 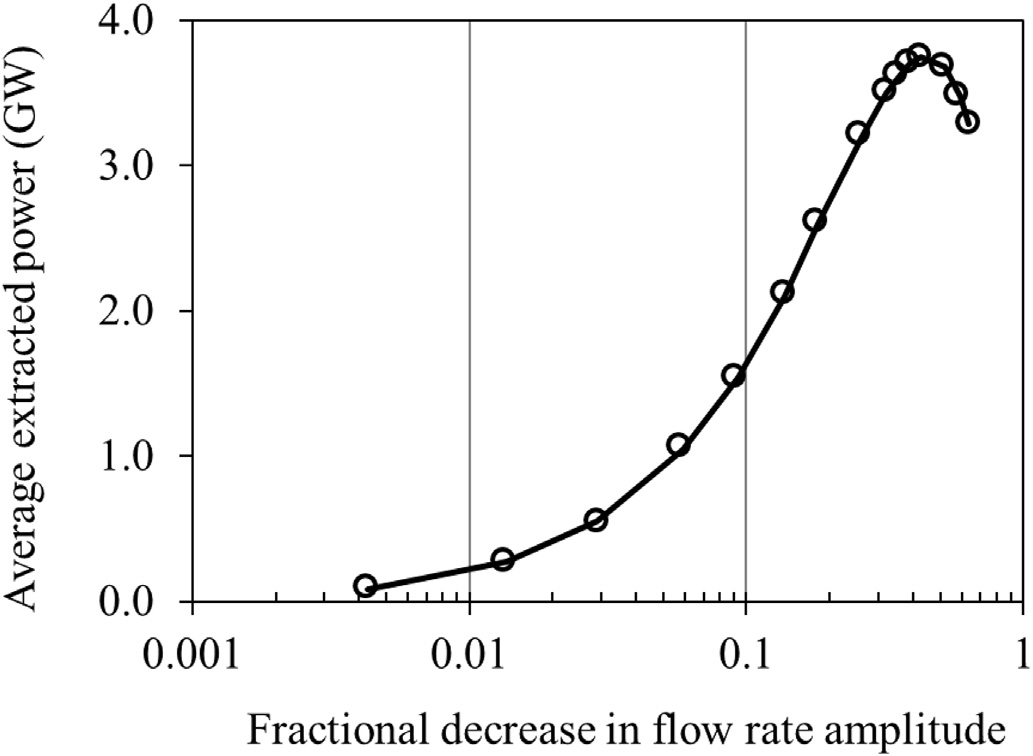 In the extreme, with a continuous densely-packed fence across a channel, the behaviour becomes more similar to a hydroelectric dam, where the available power depends less on the undisturbed speed of the flow and more on the "head", or difference in water level, that can be built up across the turbines.

It should, perhaps, be noted that all of this comes from theoretical or numerical modelling, and not from direct observation, as nobody has yet built a large enough tidal energy array to affect its channel as a whole.

Not the answer you're looking for? Browse other questions tagged energy-conservation electrical-engineering renewable-energy efficient-energy-use or ask your own question.

1
Is it possible to generate electricity using a water tower?
2
Why are large batteries described by their power?
8
Optimal speed for the water wheel
0
How to calculate power necessary generated from wind turbine to run a motor
1
how could more rotor speed mean less energy in wind turbine?
1
Water tower power generation
1
What is and how do you calculate design wind speed, on wind turbines?