Confusions about Covariant and Contravariant vectors

Now let's move to general relativity. I know that in flat space, the metric tensor is just the Minkowski metric $\eta_{\mu\nu}$, and I know that in order to change a vector to a covector, you simply contract the metric with the vector.

But if I were to take a vector $V^{\mu}$ and lower the index to a covector $V_{\mu}$ in flat space, it most certainly would not be the complicated change of basis matrix shown in the example. Am I missing something here? When you lower an index, are you finding an entirely different entity? Or are you finding the covariant components of the same vector?

I hope this makes sense.

There's a natural linear pairing operation between these objects: Compose a curve and a function, and you get a map $\mathbb R\to\mathbb R$. Take it's derivative at the point in question, et voilà. This pairing operation allows us to consider the spaces as 'dual', and in particular identify the cotangent space with the space of linear functionals on the tangent space.

On (pseudo-)Riemannian manifolds, there's additionally a metric tensor $g$, a non-degenerate bilinear form. This tensor induces an isomorphism $g^\flat:v\mapsto g(v,\cdot)$ from the tangent to the cotangent space ('lowering the index'), with an inverse map $g^\sharp$ ('raising the index').

Having said all that, now on to your actual question:

But if I were to take a vector $V^{\mu}$ and lower the index to a covector $V_{\mu}$ in flat space, it most certainly would not be the complicated change of basis matrix shown in the example. Am I missing something here?

The Minkowski metric is that 'complicated change of basis matrix' - it's just that you're dealing with an orthonormal basis, which makes it simple.

When you lower an index, are you finding an entirely different entity?

In summary $\vec{V}$ and $\tilde{V}$ are not the same entity since they belong to different vector spaces but they are related via the metric.

Update: To emphasize that vectors and one-forms are different geometric objects, consider the following image and caption from the Wikipedia article "One-form" 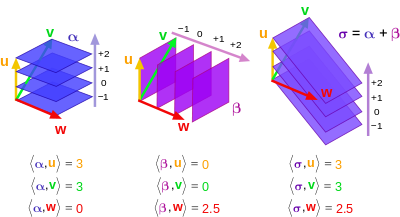 I would not see it the way @Alfred Centauri has described it. Which might be me misunderstanding the answer/ not understanding the mathematical meaning of different entities here right but I will come back to it after my take on the topic.

There is a physical vector $\mathbf{V}$ and one can express this vector in respect to the co- or contravariant basis: $$\mathbf{V}=V_\mu\mathbf{e^µ}=V^\mu\mathbf{e_µ}.$$

In a vector space $V$ over a field $K$ with a bilinear form $g : V × V → K$ (which may be referred to as the metric tensor), there is little distinction between covariant and contravariant vectors, because the bilinear form allows covectors to be identified with vectors. That is, a vector $v$ uniquely determines a covector $\alpha$ via $$\alpha (w)=g(v,w)$$ for all vectors w. Conversely, each covector $\alpha$ determines a unique vector $v$ by this equation. Because of this identification of vectors with covectors, one may speak of the covariant components or contravariant components of a vector, that is, they are just representations of the same vector using reciprocal bases.

I agree with @Alfred Centauri that co- and contravariant vectors and components are not the same but I am not sure about calling them different entities. This might be my mistake because I do not really know what to make of "entities" in a mathematical context but for me it sounds to big of a difference between two so closely related objects.

EDIT: after some points made by @knzhou in the comments and after some additional reading in a modern text book (Wald) on GR (which differs a bit from the "old school" GR lecture notes I was taught GR from).

I think the modern point of view is (as @Alfred Centauri pointed out) to really distinguish between vectors (contravariant) and dual vectors (cotangent, covariant). The equation and points I made above do not distinguish between vectors and dual vectors and I chose a (arbitrary basis/ metric) to make my point. The quote I made actually describes the "intimate" relation between both objects but at a fundamental and basis/metric independent level they are mathematically and geometrically different. There is a relation between them but they are different objects/different entities.

... establish a one-to-one correspondence between vectors and dual vectors. Indeed, given a metric $g$ we could use this correspondence to entirely circumvent the necessity of introducing dual vectors. Normally this is done and accounts for why the concept of dual vectors is not more familiar to most physicists. However, in general relativity we shall be solving for the metric of the spacetime; since the metric is not known from the start, it is essential that we keep the distinction between vectors and dual vectors completely clear. [R.M. Wald, 1984, General Relativity, p. 23]

Not the answer you're looking for? Browse other questions tagged differential-geometry metric-tensor tensor-calculus vector-fields covariance or ask your own question.

46
Is it foolish to distinguish between covariant and contravariant vectors?