All explanations of the air-conditioning cycle are somewhat like this:

For example, what if the high-pressure gas goes through the condenser and it hasn't condensed fully? similarly with all the other stages... what if the flow of the refrigerant is too fast, or too slow... 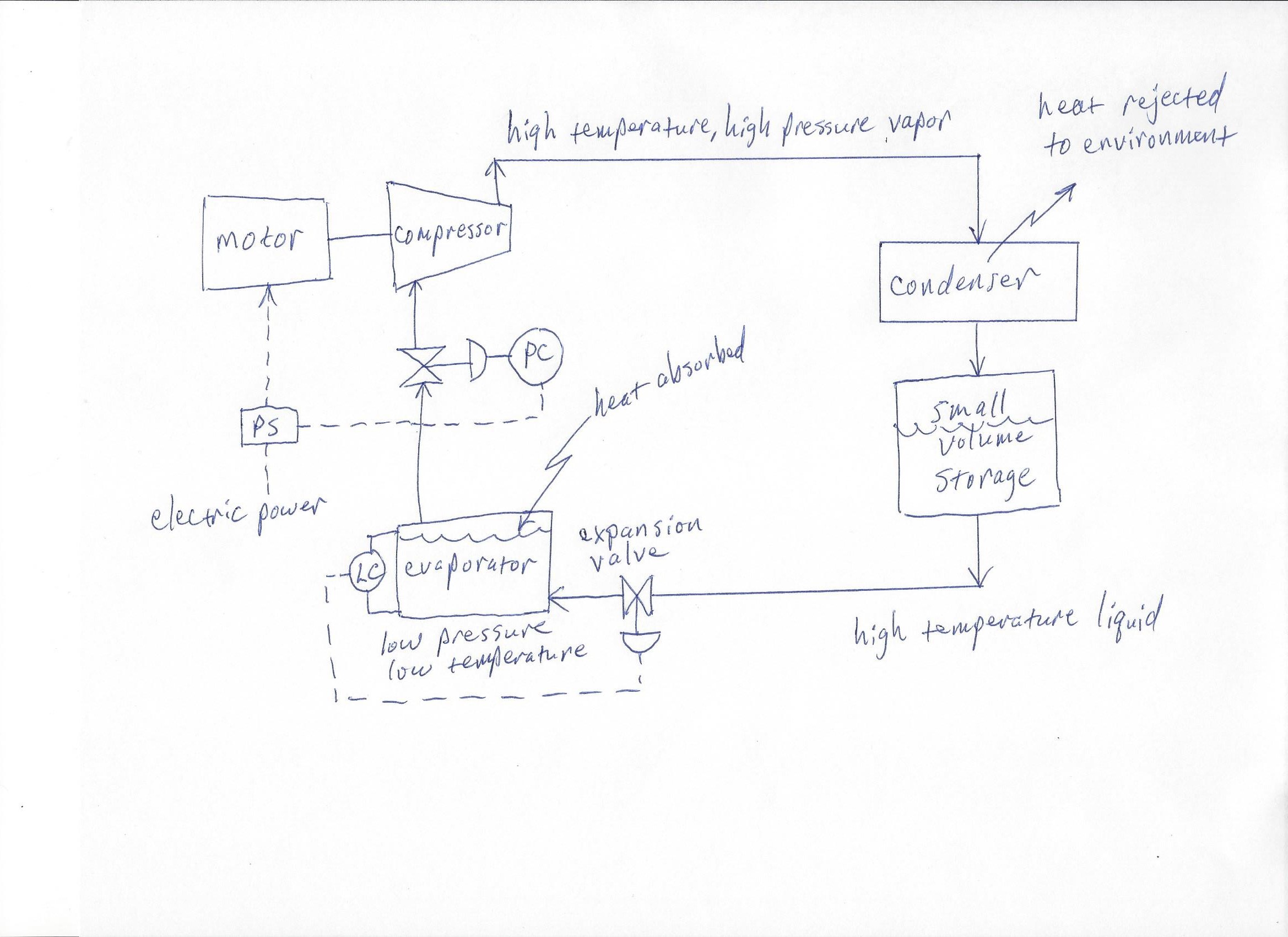 Ameet, regarding your question of how refrigerant is not allowed to accumulate in the wrong places, any real-world refrigeration system will have either electronic or mechanical devices which will prevent such an occurrence. My drawing, and the details above, give one example of how this can be done. I am sure that there are several other ways of accomplishing the same thing, and I am also sure that the designers of any real refrigeration system will specify electrical or mechanical devices to deal with these same issues.

Regarding your specific question of failure of the high pressure refrigerant to condense in the condenser, this can indeed happen. If the person charging the refrigeration system does not pull a hard vacuum on the system before charging with refrigerant, air will be in the system. This air will tend to accumulate at the condenser, and it acts to impede heat transfer because it is non-condensible. Until someone purges the air from the condenser by blowing it to the atmosphere, the refrigeration system will operate improperly.

Regarding your question about flow rates of refrigerant, my example uses the indicated controllers to ensure the proper flow rate of refrigerant. Unless a controller fails, or some design criterion is exceeded (either too little or too much of a design variable), flow rates should be whatever is needed for the system to function properly.

Not the answer you're looking for? Browse other questions tagged heat-engine carnot-cycle or ask your own question.

0
Use of throttling device
0
Reverse refrigeration and 2nd law of thermodynamics
0
is boiling point of the gas cause cooling in expansion process of refrigeration?

2
Carnot cycle: What happens to the rest of the energy?
0
Understanding the Carnot cycle
2
Why can't the Carnot cycle be used to operate automobiles, if its the most efficient?
0
Carnot cycle with varying reservoirs
2
Why aren't there any air conditioning systems that compress, cool, then expand air directly?
0
Actual sequence of refrigeration cycle
0
About *Carnot's cycle* and *engine*
1
How does the Carnot Cycle work?
1
How can we show that Entropy is a State Function?