Most general form for the wave equation

Mason handled the distinction between inhomogeneous and homogeneous differential equations, but if one is speaking of the most general possible form of the wave equation, it is,

where both fields are rank $(m,n)$ tensors, acted upon by the Laplace-Beltrami operator $\square = \nabla^a \nabla_a$ whose action on the tensors depends on both the metric and their rank. For a scalar field with metric $\eta_{\mu \nu}$, it reduces to the most familiar form of the wave equation, $(\partial^2_t - \nabla^2)\phi = f$. (The above can also be recast in the language of differential forms.)

However, in a way this does not cover all the possibilities. For example, in general relativity, for a perturbation $h_{ab}$ of the metric, the first order change in the curvature is,

which is understood as the curved space 'wave operator' in the literature because it certainly admits wave solutions but is clearly not equivalent to the wave equation above as it contains other terms involving curvature tensors. Thus, the 'most general form' of the wave equation isn't something we can really write down, unless your idea of it is strictly $(\partial^2_t - \nabla^2)\phi = f$.

I'm not sure what you mean by $cte$, but I'm assuming it's some constant but I may be misinterpreting

In general there's not much I can say about these solutions since they'll depend heavily on the form of $u$, though I'm sure some googling will give you plenty of examples. 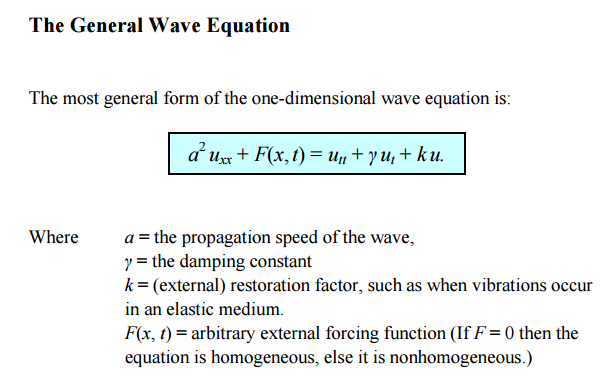