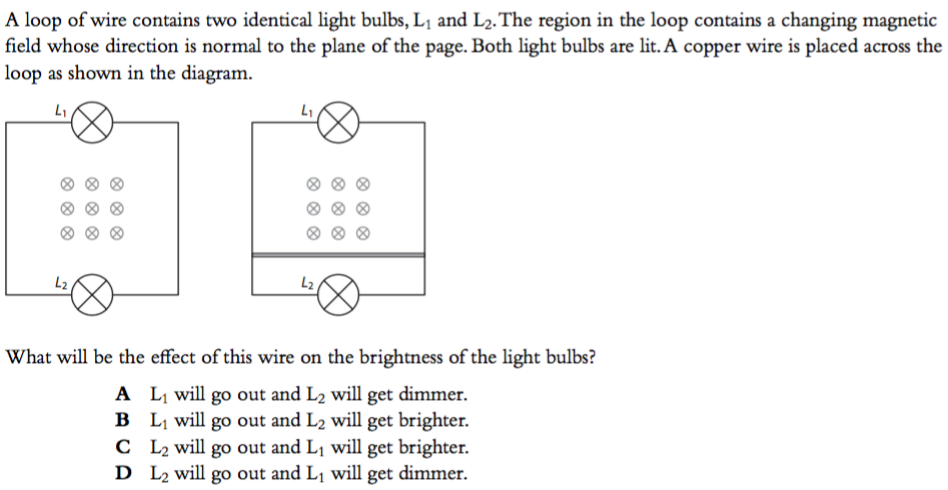 I chose C as the voltage, which was initially split between the two lamps, will only be "used" by lamp 1, thus increasing the brightness. However, the answer is D.

Assume that the copper wire a very much smaller resistance than that if the bulbs and that the resistance of the bulbs $R$ is independent of the current passing through them.
Let the induced emf in the loop be $2\mathcal E$.
The current in the circuit which produces a certain equal brightness for the two bulbs is $I = \frac{2\mathcal E}{2R}=\frac{\mathcal E}{R}$.

Suppose the whole area of the loop was $4A$.
With the connecting wire as shown in the right hand diagram let the area of the top loop be $3A$ and that of the bottom loop be $A$.
The emf induced in the top loop is now $1.5\mathcal E$ because the rate of change of magnetic flux in the top loop has increased. And the current $\frac{1.5\mathcal E}{R}$ which is larger than before so the top bulb is brighter.
For the bottom loop the current is $\frac{0.5\mathcal E}{R}$ which is smaller than before so the bottom bulb is less bright.
So the answer is C.

An alternative (quicker?) method. Now put the wire exactly down the middle so that the induced emf in each loop, top and bottom, is $\mathcal E$.
So the current through each loop is exactly the same as before $I =\frac{\mathcal E}{R}$ and so the bulbs are as bright as before.
Now place the central wire so that it is very, very close to the wire and the bulb at the bottom.
The emf induced in the top loop is slightly less than $2\mathcal E$ and so the current through the top bulb is just less than $\frac{2\mathcal E}{R}$ which is slightly less than twice the current in the original circuit and so the top bulb is brighter than before.
For the bottom loop the induced emf is very small, so the current in that loop is very small and so the bottom bulb is dimmer than before.
So the answer is still C.

Not the answer you're looking for? Browse other questions tagged electromagnetic-induction or ask your own question.

0
Electromagnetic Induction
1
Faraday's law or Lorentz Force
0
Total changing flux in Faraday Lenz law of induction
0
Why does a Crookes tube work when connected to an induction coil?
0
Self Induction: Why does light bulb flash when circuit switched off and not when switched on?
0
Electromagnetic Induction Problem
0
On the direction of the induction current
0
Change in voltage across an inductor bulb gets brighter
1
How is there self-induction at the moment of closing the circuit?