What is the "truth" of the electrostatic force? 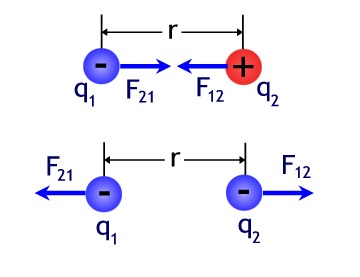 I want to ask a question about the Coulomb force or the electrostatic force.

As you can see, there are these statements:

1) The electric force is a "vector quantity".

2) The electric force between two stationary charged objects is called the Electrostatic force.

3) The electrostatic force between two charges can be repulsive or attractive.

My problems are for each question:

1) If an electric force is a vector quantity, then why do we call the force between two charges "force"? Should it be called "forces" as there are two vectors in the case of "Coulomb's law" (meaning F12 and F21)?

Does the term "electrostatic force" mean (see the example in the picture):

Think of it this way, the Earth exerts a force on a pebble which is directed towards the centre of the Earth and this force is equal to its weight $ mg$.
Also, the pebble exerts an equal force just opposite in direction on the Earth.

Similarly, $\ q_1$ exerts a force on $q_2$, so does $q_2$ on $q_1$. Only a single force acts between the two charged particles. The only difference is the direction of the force is opposite for both the particles.

Just think, if you combine the two vectors what you get is $0$ as the forces exactly cancel each other.

So, the Electrostatic force is equal to the magnitude of $F_{12}$ (and of course $F_{21}$) and acts in opposite directions on the two particles.

(1) When we call it the electrostatic force, it is a matter of semantics. As others have noted:

(3) Again, it boils down to semantics, when it doubt just understand it as the magnitude of the electrostatic force $|F|$, and exists as a pair of force.

1) If an electric force is a vector quantity. Then why do we call the force between two charges "force" because it should be "forces" as there are two vectors in the case of "Coulomb's law". (meaning F12 and F21)

Remember that when talking about forces, we always talk about a particular object that the forces work on. So, pick one particle, and you can talk about one electrostatic force exerted on it by something else.

Yes, the magnitude of an electrostatic force is:

This is the magnitude of F12. It also happens to be the magnetude of F21. (This is because of Newton's 3rd law.)

But they have different directions and are different forces, who just happen to be equal in magnitude. Each of the two shown particles only feel one of these forces on itself.

The electrostatic force with the magnitude above is as any other vector defined by both magnitude and direction. And this is fairly easy to write, we just have to multiply the magnitude onto the direction of the force:

The $\vec{\hat r}$ is the direction as a unit vector (one unit long). Naturally this direction can be anything depending on how exactly the charges are placed compared to each other and depending on signs.

Either. Both are two different electrostatic (that just happen to have equal magnitude because of Newton's 3rd law).

It boils down to the use of English.
Change "Coulomb force" into "Coulomb interaction" and what do you get?

So in common usage "Coulomb force" and "Coulomb interaction" are synonyms.
So although the word "force" in "Coulomb force" is used in the singular it actually refers to the two action and reaction forces.

Not the answer you're looking for? Browse other questions tagged forces electrostatics terminology coulombs-law interactions or ask your own question.