How can helium be liquid at absolute zero, given the Third Law of Thermodynamics? [duplicate]

I learned recently that Helium is a liquid even at 0K. Doesn't that mean that it still have some entropy? If so, does it not violate the postulate of thermodynamics that states that entropy must go to 0 as temperature goes to 0?

Interesting question. The "third law" of thermodynamics actually states that

The entropy of a perfect crystal at absolute zero is exactly zero.

Since many systems in nature crystallize at some point when their temperature is lowered, this statement is often misinterpreted as:

The entropy of a physical system at absolute zero is exactly zero. (wrong!)

Entropy is defined as

where $\Omega$ is the number of microstates of the system. Since there is only one microstate corresponding to a perfect crystalline configuration, in the case of a crystal we have $\Omega=1$, and therefore $S=0$. But there are systems with a degenerate ground state, i.e. many different states of lowest energy, and also systems (like glasses) that get "stuck" and cannot reach their real ground state. Those system won't satisfy $\Omega=1$ at $T=0$, and therefore their entropy will be different from $0$.

You can find more about the correct interpretation of the "third law" here and here.

Liquid helium is a unique case: it is the only element which remains liquid at atmospheric temperature down to $T=0$ and does not crystallize. Its phase diagram is shown in the picture below: 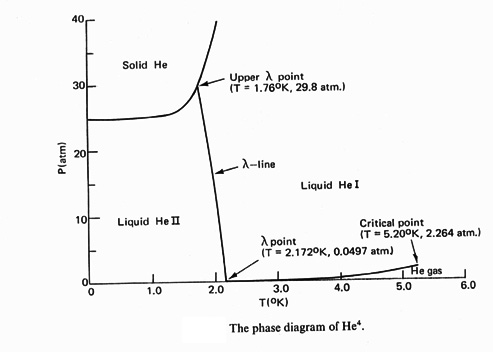 Below the $\lambda$-line the liquid can be described by the so-called two-fluid model. It behaves as if it consists of two components: a normal component, which behaves like a normal fluid, and a superfluid component with zero viscosity and zero entropy. [...] By lowering the temperature, the fraction of the superfluid density increases from zero at $T_\lambda$ to one at zero kelvin. Below 1 K the helium is almost completely superfluid.

So, at $T=0$ $^4$He is completely superfluid and it has zero entropy. Why is this? Why is the entropy of a liquid $0$? Well, it's because liquid helium is no ordinary liquid.

In the superfluid state, all the atoms are in the same quantum state. Moreover, they are identical. This means that there is in fact only one ground state, because if we exchange two atoms nothing changes. Therefore, the number of microstates is $\Omega=1$ and

Not the answer you're looking for? Browse other questions tagged thermodynamics condensed-matter temperature bose-einstein-condensate superfluidity or ask your own question.

16
Is entropy of all systems zero at absolute zero?
6
The Correct Statement of the Third Law of Thermodynamics