If I evaluate degree of freedom and got some number $n$, then how can I know what are those $n$ independent coordinates?

If we take the case of double Atwood machine, we get 2 dof. So which two coordinates should be said to be independent? $x$ and $y$?

If you have a system of $N$ particles with $f$ equations of constraints, then the effective degrees of freedom reduces from $3N$ to $3N-f$. This means you don't have to worry about all the $3N$ coordinates, but just focus on the $3N-f$ coordinates to study the dynamics of the system. This idea is based on a simple logic as I will try to explain it in terms of a circular motion.

Suppose a free particle exhibits a circular motion in the $xy$-plane. The solution for the equation of motion will be in the form

This means you only need any of the coordinates- $x(t)$ or $y(t)$- to describe the mechanics of the system. The choice is yours. If you choose $x(t)$ as the independent coordinate, then since $r$ is a constant, once you fix a value of $x(t)$, the value of $y(t)$ get fixed automatically because of the constraint equation. In other words, $y(t)$ depends on $x(t)$ by the above equation.

In the case of free fall of a particle, the solution is given by:

where $y(t)$ is the position of the object in the $t^{th}$ second. Here, the degree of freedom is one. You only need $y$ to spot the particle at any time $t$. 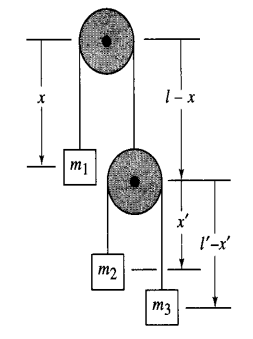 where $x_p$ and $x_i$ are the vertical positions of the pulley and the masses $m_i$ respectively.

Hence the effective degree of freedom of the system reduces to $2$.

In a simple way, one degree of freedom is that of the mass $m_1$ and the other is that due to the mass $m_2$. As you can see from the figure, their motions are independent to each other. Hence $x$ and $x'$ are the independent coordinates here.

Not the answer you're looking for? Browse other questions tagged classical-mechanics coordinate-systems constrained-dynamics degrees-of-freedom or ask your own question.