RC circuit theory and voltage in the capacitor vs Ohm's Law

I've been told that once the capacitor is full we can literally "cut" the circuit because no current can flow.

That argument makes sense, but because the capacitor is full, doesn't that also mean it has a potential difference across it? In other words, the capacitor is a new battery? Then we should apply Kirchhoff Law in the circuit if we want to find the current? (even though I just said it was zero).

What is going on? What is this contradiction?

There is no current in the circuit yet clearly the potential difference in the capacitor is NOT zero. 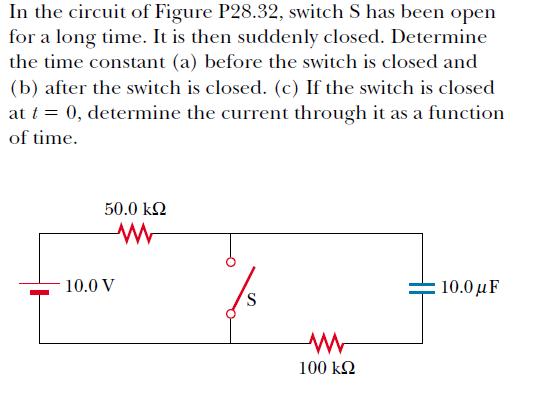 For part (c), why do I have to use $I = I_0 e^{-t/ \tau}$? Clearly at steady state, the current of the right circuit is just the potential difference across the capacitor (which now can be treated as a battery) and the resistance. As pointed out before I can only apply Ohm's Law to resistors and batteries, but at steady state the capacitor can be thought of as a battery. So the contradiction lies here.

EDIT2 Let me clarify my question again. I am also confused why $I = I_0 e^{-t/ \tau}$ is used? Why does the capacitor discharge? Yes it's considered an isolated circuit once the switch is shut, but does that mean even though part of the circuit is still hooked up to the battery, that the current doesn't continue to build to prevent discharge?

You are right, there is a potential difference across capacitor according to the expression

where $Q$ is charge on the capacitor and $C$ is capacity of the capacitor. And yes, capacitor can be thought of as being a tiny rechargeable battery (see below).

Cutting out the capacitor of a circuit in a steady-state situation is a valuable trick to simplify a more complex system.

While you are correct, that there is a potential difference between the capacitor, this is also true for other parts of your circuit. In a 'complete' model you need capacitors between every bit of a circuit that is on a different voltage level. This is called stray capacitance. Modeling on this level of detail is hard and often only necessary when you use very high frequencies.

So you need to apply Kirchhoff's law if there is current flowing, i.e. you are not in a steady-state situation.

Just charge a big capacitor with a DC power supply through a resistor and measure the voltage across the capacitor. It will steadily rise to the output voltage of the power supply. Then cut off one of the legs of the capacitor. Your voltmeter will not show any difference. That is why you can neglect it.

Not the answer you're looking for? Browse other questions tagged electric-circuits capacitance electrical-resistance or ask your own question.

2
RC circuit discharging capacitor, trouble understanding
1
Modelling a capacitor with dielectric resistance as a circuit element
3
Why does discharging a capacitor give a higher power output than using a battery?
1
RC circuit discharge while being connected to a battery?
7
Inductor and Capacitor in Parallel
0
Current when capacitor and resistor placed in parallel?
0
Kirchhoff's voltage law for an ideal circuit containing only a capacitor
0
Kirchhoff’s Voltage Law validity in short circuited circuit