Period of oscillation through a hole in the earth

Special mention to the QI episode that kicked this off: Anyway, the host points out that a tunnel that connects a pair of points on the earth's surface can be thought of as a gravity train - where the force of gravity along the tunnel allows an object to fall through it and emerge on the other side. Any force perpendicular to the tunnel (in case the tunnel doesn't pass through the center of the earth) is ignored.

Clearly, it is simple harmonic and therefore the period is constant and has no dependence on which two points were used to make the tunnel.

Does anyone have an intuition for why this should be the case? I imagine some Gauss' law type of argument should work here, but I cannot see it.

EDIT: More to the point, why even when the tunnel does not pass through the center, one obtains the same period. Is there any deeper explanation as to why this should be the case?

The fact that the period of the gravity train that passes through the center of the Earth is equal to the period of an orbit that skims the Earth's surface is not a coincidence. Consider a polar orbit around Earth (i.e., one that passes directly over the coordinate north and south poles). Now, consider only the north-south motion of the satellite by projecting the motion onto a line parallel with the Earth's axis. What kind of motion is this? Circular orbits have a constant speed, so the 1-D motion must be sinusoidal. The gravity train is just a circular orbit where the motion off the Earth's axis is restricted. Perpendicular forces and motions can be treated independently. See the animation below to illustrate. The spinning arrow shows the path of a satellite, while the straight lines show the path of the gravity train for perpendicular tracks.

Now, what about gravity trains that don't pass through the Earth's center? First, notice that your expression for the acceleration of the train does not depend on the distance from the Earth's center. As long as the track is symmetric about the Earth's radius, then you will get the same train motion no matter the depth of the track. The ends of the track do not have to connect to the surface. You can also reason that the depth of the gravity train track does not matter by starting with a track that connects to the surface at both ends and then adding a shell around the entire planet to increase its radius. Inside a spherical shell, the gravitational force is zero, so burying the track does nothing to the motion.

TL;DR: The gravity train is a 1D projection of the 2D circular orbit where the length of the train track is the same as the diameter of the orbit. The time to traverse the track is the same no matter the length or the depth because the period of a surface-skimming orbit around a constant-density planet is independent of the size of the planet.

(*) Everything is physics is ultimately a mass on a spring.

As non-intuitive a sit may seem, the period of a simple spring is independent of how far you pull or push it. How could the time it takes for one oscillation be independent of the amplitude?

Imagine a vertical spring with a bob, like so:

Now, the first picture shows the spring displaced by y units, so that $$ky=mg$$

I hope this gives you some intuition.

Assuming Earth to be a uniform sphere of mass M and radius R. Now constructing a tunnel which connects any two points on its surface. Suppose at some instant the particle is at radial distance r from the centre of earth, O. Since the particle is constrained to move along the tunnel, let us define its position as distance x from C. Hence, the equation of motion of the particle is,

The gravitational force on mass m at distance r is,

Since, $F_{x}\alpha-x$, it's motion is simple harmonic in nature. Further,

So a particle or a person of mass m would tunnel 34 times a day! 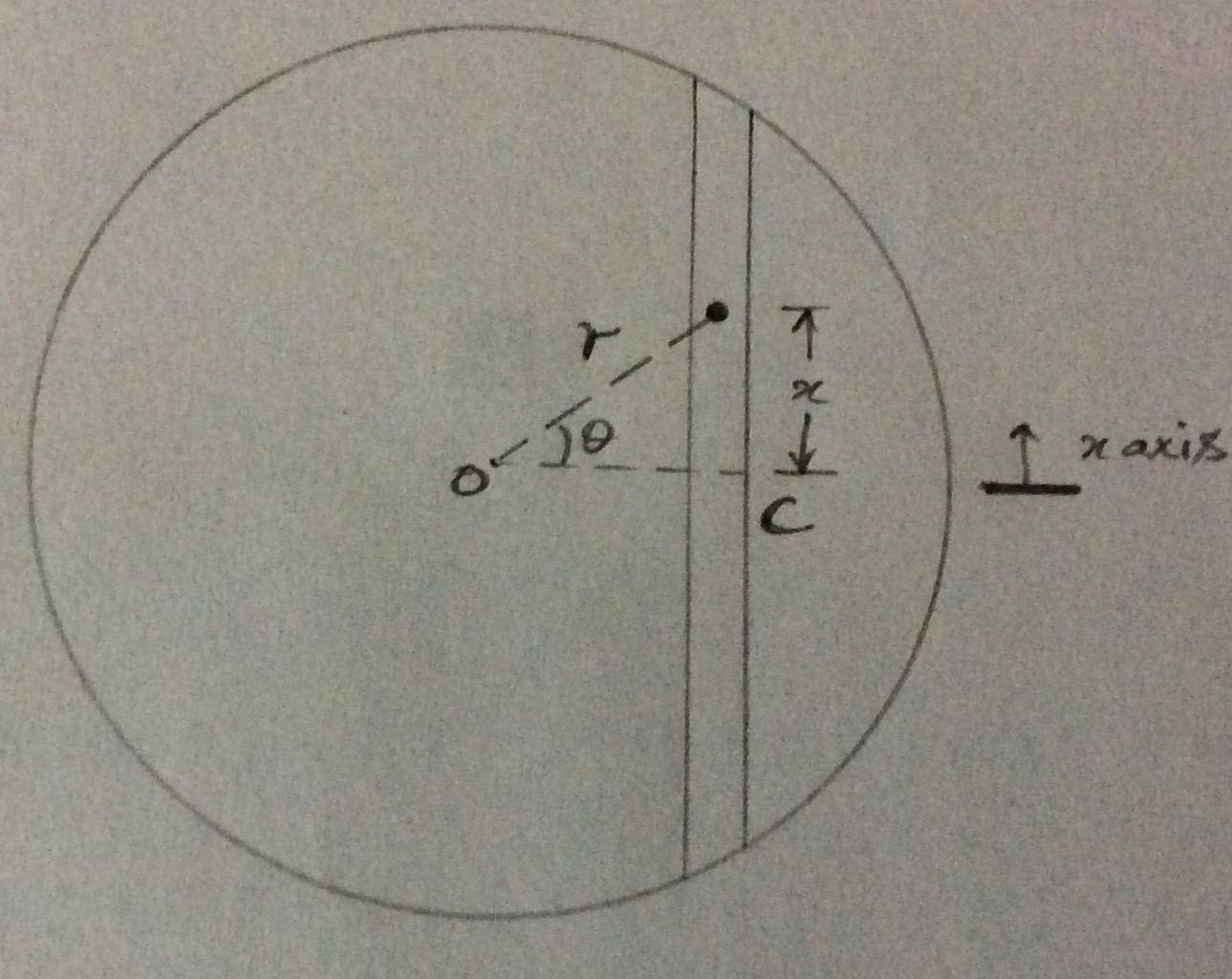 It would be interesting to do the same for the original shape of Earth and see the deviation of the time taken for a particle to go through the tunnel.

Picture instead a frictionless pendulum with two beads attached that are constrained to remain at two different, fixed heights. Their period remains the same as in the case of beads glued to the pendulum shaft, only now, their motion is restricted to one dimension. While the situation involving Earth and gravity seems to involve more dimensions, the relevant components reduce to this same problem once you've established the linear relationship through the center of the planet.

EDIT: Here is an attempt at an intuitive explanation for the special case when the tunnel passes through the center of the earth. For the general case, refer to the other solutions that have been provided.
Think of the solid sphere of earth to be composed of many thin concentric hollow shells each of same density $\rho$. Now if the train is at a distance d from the center of the earth, the gravitational force exerted by the shells having radius greater than d on the train will be zero(The train is in the inside of these shells). Only the shells having radius less than d will exert a force on the train. The total mass of these shells will be proportional to $d^3$ (as these shells form a sphere of radius d). The center of this sphere is at a distance d from the train.
Now $\hspace{5cm}$ g $\propto M/d^2$
And as we have seen $\hspace{5cm}$ M $\propto d^3$
we get$\hspace{5cm}$ g = kd for some constant of proportionality d.
This means that the acceleration due to gravity is proportional to the distance of the train from the center of the earth and this is exactly the kind of acceleration that we get in the case of a linear oscillator.

Not the answer you're looking for? Browse other questions tagged newtonian-mechanics newtonian-gravity gauss-law or ask your own question.

0
Making a tunnel in the Earth through its center
1
Gravitation: To find acceleration of a particle as a function of distance from centre of a tunnel dug along two points on Earth's surface
-1
A planet with a straight tunnel through it
55
How does gravity work underground?
18
If it was possible to dig a hole that went from one side of the Earth to the other...
1
Is the time period of oscillations in the underground tunnel constant for all lengths?

4
How are the theoretical properties of a gravity train linked to orbital properties?
1
Why isn't this motion simple harmonic?
1
What happens to the water on the surface of the Earth if the Earth is not rotating about its axis in the Earth-Moon system?
0
Satellite passing near Lagrangian points
1
Can you intuitively explain the decreasing time-period of oscillation with increasing pendulum length in some cases?