I am holding an object in my hand fully extended in air. If I move it towards right , will I have to apply any force in the direction of motion (neglecting air friction)?

In my book they say work done is zero because force and displacement are mutually perpendicular. I know in this case I am applying force upward against gravity but at the same time I think a little force is also being applied in the direction of motion (neglecting air friction).

Work done by the gravity is zero. And if initial and final velocity is same(in this case zero) then work done by the force applied by you is also zero. Because there is no change in kinetic energy.

Now in order to move the object first you have to accelerate it to give it a velocity. The work done by the force applied by you is positive now. But when you put the object to rest again you have to decelerate it. The work done in this case is negative. Mathematically it can be shown that work done in both process have same magnitude as the change of velocity and thus the change of kinetic energy is zero.

The author is writing about the book and the work done on the book.

If a book ins moving through the air and if one neglects air resistance no work is done to keep the book moving in the horizontal direction because there are no forces in that direction.

The author has put that statement a different way by in effect stating that the only force on the book is gravity and that vertical force has no component in the horizontal direction and so does no work moving the book horizontally.

In my book they say work done is zero because force and displacement are mutually perpendicular.

Trust me, it doesn't say that.

When you're moving the object to the left or right (along the $x$-axis), you need to apply a net force that is parallel to the displacement vector. Work is then done acc.:

But as you're not moving the object along the $y$-axis, the force to hold it steady in the vertical sense does not perform any work because that force is perpendicular to the $x$ displacement.

I am still unable to figure out whether I need to apply some force in the direction of motion or not. If not then how does the object decides to move towards right or left?

This is explained by Newton's laws of motion.

First law: an object either remains at rest or continues to move at a constant velocity, unless acted upon by a net force.

Initially you're holding the object still, both in the vertical sense ($y$) and horizontal sense ($x$).

In the vertical sense, gravity $F=mg$ acts on it but you counteract that with an equal but opposite force, hence there is no net force acting on it in the $y$ direction.

To illustrate this we use a free body diagram: 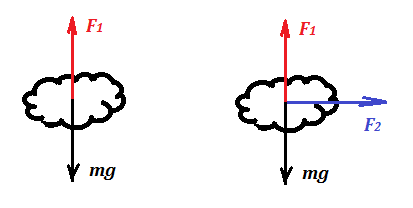 Left: the object is motionless and $F_1$ is the force you provide to counbteract gravity.

Right: $F_2$ is the 'pulling' or 'pushing' force, depending on its direction the object will move left or right.

Newton's second law basically quantifies all this and allows to calculate the actual accelerations.

Not the answer you're looking for? Browse other questions tagged homework-and-exercises newtonian-mechanics classical-mechanics work or ask your own question.

0
Is acceleration causing displacement or velocity?
6
What does it mean to say work is path-independent when pushing an object in different directions?
0
Work done in equilibrium positions
1
Why isn't work done when carrying a backpack with constant velocity?
0
Net work done in lifting
1
Why are you doing no work when carrying a body through a horizontal distance?
1
Can the work by kinetic friction on an object be zero?
2
Can the work by static friction on an object be negative?