I have trouble understand how Vorticity occurs in a Rotational and not in a Irrotational vortex when I consider it in terms of shear forces.

A Rotational vortex has a velocity profile where

whereas a Irrotational vortex has a velocity profile 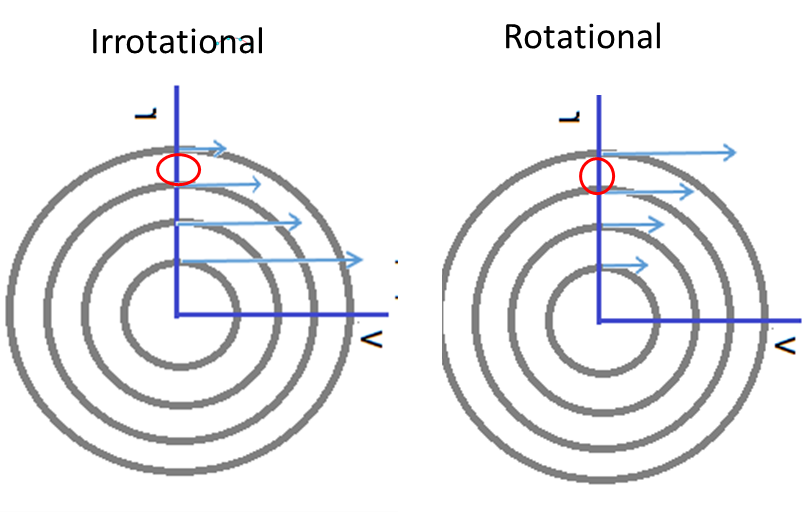 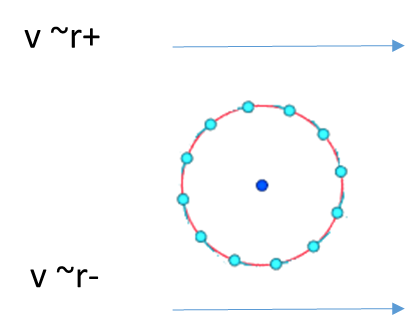 Irrotational - the velocity is inversely related to radius so between a larger $r+$ and smaller radius $r-$ there will be a velocity profile and this will cause shear forces ,resulting in rotation towards the larger radius $r+$ 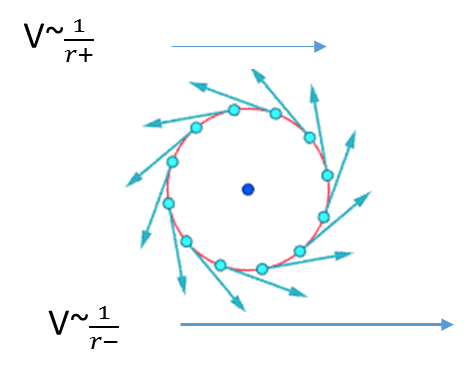 So if we only considering shear forces to this point, then only the Irrotational has any rotation- vorticity.

In the Rotational example

We have a centripetal force caused by changing the bulk velocity vector around a solid curve This centripetal reaction force has no counter-clockwise action of the shear to oppose it. So as its acted on by the centripetal force the parcel is free to rotate with the flow. This means that the rotational parcel changes vector as it goes around the bend.

In the Irrotational example

Allowing the Irrotational parcel to maintain the same vector as it goes around the bend and the rotational to change heading.

Your calculation of vorticity is wrong. Vorticity is not zero if fluid element rotates, even it does not deform, which is the case in the rotational case. Just use your finger pointing from one side to another side of a fluid element and follow this element for a while will convince you it is rotating. On the other hand, in the irrotational case if you follow two perpendicular sides of an element, you may find they rotate in opposite directions and the sum of the angular velocity is zero.

Not the answer you're looking for? Browse other questions tagged fluid-dynamics vector-fields flow vortex or ask your own question.