Why is water evaporated from the ocean not salty?

I am wondering about this. When salty water in the ocean evaporates we are getting the clean distilled water. Why is that? I was trying to think on this and maybe the comparative size/mass of water molecules to the size of different salts molecules plays a role here, but it is not likely. The size/mass of e.g. alcohol molecules is much higher but they still evaporate quite well. Could you explain intuitively?

Water molecules are polar; this basically means that they have a "positive side" and a "negative side"

Salt is composed by Na$^+$ and Cl$^-$ ions held together by electrostatic forces (is a ionic compound). When salt is put into water, it dissociates, i.e. the Na$^+$ ions are separated from the Cl$^-$ ions.

When in the water, such ions are surrounded by water molecules facing them with the side which has charge opposite to that of the ion; this is because this way they can reach a lower energy state, being their electrostatic field screened by that of the water molecules (picture below [source]). 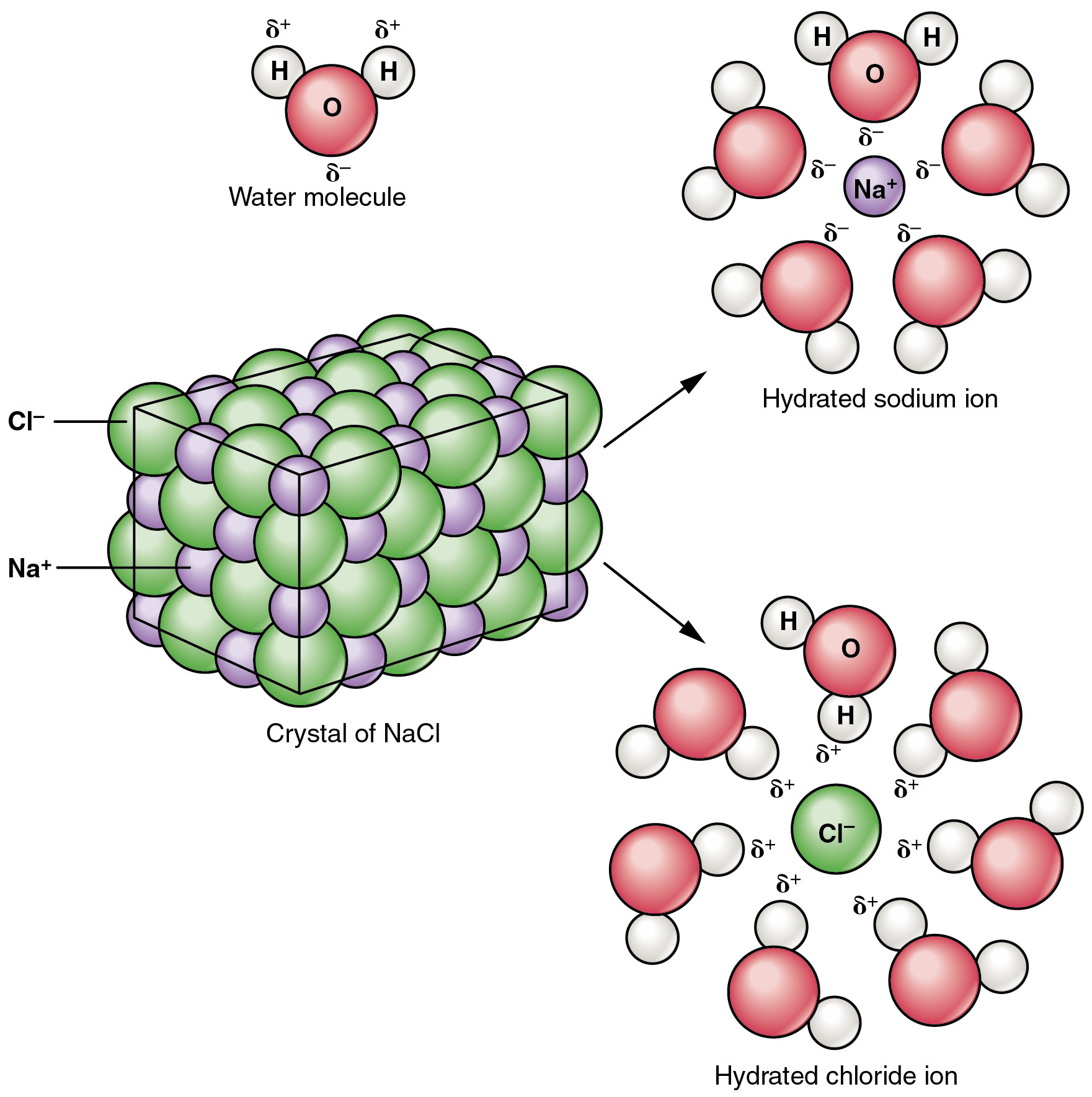 Water evaporates when the thermal energy of the molecules is high enough to break about half the hydrogen bonds between them [source]. For the ions, it is much more difficult to evaporate, because their thermal energy would have to be enough to compensate the effect of the water molecules which surround them.

Basically, both the water molecules and the ions are in what is called a potential energy well: to "kick them out" of the well, we have to provide them with an energy as high as the depth of the energy well $\Delta E$ (picture below). 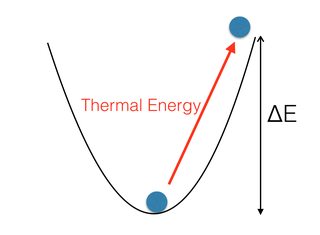 The depth of the well in which the water molecules are (due to hydrogen bonding) is much lower than the depth of the well where the ions are. So, a far higher thermal energy is needed to take an ion out of the water. Since thermal energy is proportional to $k_B T$, where $k_B$ is Boltzmann's constant, this means that a far higher temperature is needed.

To get an idea of the order of magnitudes of the energies involved, we should consider the following:

There is no standard  definition for the hydrogen bond energy. In liquid water, the energy of attraction between water  molecules (hydrogen bond enthalpy) is optimally about $23.3$ kJ/mol (Suresh and Naik, 2000)  and  almost five times the average thermal collision fluctuation at $25$°C. This is the energy required for  breaking and completely separating the bond, and equals about half the enthalpy of vaporization ($44$ kJ/mol  at $25$°C), as an average of just under two hydrogen bonds per molecule are broken when water  evaporates. [source]

At any given temperature and pressure, liquids (like water) and solids (like salt) are in equilibrium with their respective gaseous form. The vapour pressure describes this phenomenon. Often, solids have a lower vapour pressure as liquids. The higher the vapour pressure, the more volatile a compound is. And in the instance of pure sodium chloride / NaCl, this vapour pressure is much lower than the one of water. This alone contributes why heating sea water, and condensing the vapour, will first yield water.

In addition, to perform such a distillation, the Raoult's law applies, too. Basically, there is a total pressure $p$ in the system observed that is the sum of the individual partial pressures of the two components (water and salt). The partial pressure takes into account the vapour pressure the pure component possess (at this temperature and pressure) times the concentration of this component in the mixture (expressed as molar fraction):

where the molar fractions will add up to one. So if we simplify "seawater" as a solution of NaCl in water:

The contribution of the total pressure $p$ by NaCl is lowered further as at ambient conditions, water may dissolve only 359 g NaCl per litre of water (reference), hence excluding a solution of higher concentration of NaCl than about 36 mass%.

This is a simplified view, leaving out any idea of "molecules" or "ions". Raoult's law is an idealization, too (hence, for example, azeotropes like ethanol/water). Of course, sea water contains more than NaCl; and to remove the later from the former, reverse osmosis is an energetically more favourable technique. Eventually, to distill NaCl, you need conditions of very high temperature and very low pressure, far distant from the ones to distill water.

Alcohol will boil off first
The boiling point is 78.37 °C
There will be some water but the ratio of alcohol in the vapor phase will be higher than the liquid. Water and alcohol are azeotropes so things flop at about 70% alcohol.
The size is not that much of a factor - hexane is volatile. wiki

Salt is dissolved in water but that does not make the salt more volatile.

Basically no salt evaporates. With very rapid boiling you might get some entrainment. The vapor phase is going to have essentially not salts or minerals as they are solids are at 100 °C.

There need to be clear distinctions between forces holding atoms (charged or neutral ) together and molecules (e.g., water, H$_2$O; Salt, NaCl) together. It is ionic or covalent bond that holds atoms together.

An attractive or repulsive force binds the molecules together (e.g., more than one H$_{2}$O molecules). This force is different from ionic or covalent bonds because it binds neutral molecules or atoms together and is called van der Waals force (wiki). This force ceases to exist when the molecules are further apart. During neutral and equilibrium condition, the water molecules and the dissolved salt get bound by van der Waals force. Additional thermal energy hence would create vibration and weakens this force between the molecules. Once this force weakens, H$_{2}$O (molar mass, ~ 18g) is much lighter than NaCl (molar mass, ~ 59g). Compare it with the molar mass of dry air (Nitrogen, and Oxygen and other trace gases), ~29g. So, water is lighter than air hence buoyed up into the air leaving behind the heavier NaCl.

In conclusion, it is not covalent or ionic bonding that brings about phase change. It is rather van Der Waals force (the force binding molecules together) that weakens when the molecules are not close enough by applying additional thermal energy (e.g., water starts to vaporize at 100 $^o$C and hence the H2O molecules fly into the air so easily because of their lighter weight than air).

Share
Improve this answer
edited Oct 19, 2016 at 17:20
answered Oct 18, 2016 at 21:54
user77220user77220
$\endgroup$
Add a comment  |
Highly active question. Earn 10 reputation (not counting the association bonus) in order to answer this question. The reputation requirement helps protect this question from spam and non-answer activity.

Not the answer you're looking for? Browse other questions tagged water evaporation liquid-state or ask your own question.

3
Why does water not evaporate in below 0 degrees?
9
Water evaporation problem. Exercise from Feynman's lectures
2
Why is water surface smooth?
32
How are water vapors not visible?
5
Why does salt ions is not exist at vapor when the water is boiled and evaporated?
1
Does water have a minimal thickness because of van der waals force?
1
Why does surface tension act towards the centre of an air bubble in water?
0
Will an evaporation water cooler work better if the water in the reservoir is cool?