I have a question which is inspired by considering the light field coming off an incandescent lightbulb. As a blackbody radiation field, the light is in thermal equilibrium at temperature $T$, which implies that each normal mode has a mean energy given by Planck's law, and a random phase. Thus, if I were to look, microscopically, at the electric field, I would see a fairly complicated random function that can only really be considered constant at timescales $\tau\ll \hbar/k_B T$ (at which the corresponding modes have next to no amplitude and therefore do not affect the electric field's time dependence).

This illustrates a general aspect of thermal and thermodynamic equilibrium: they are only relevant concepts when the systems involved are looked at on timescales far longer than their relevant dynamics.

My question, then, is this: are examples of slowly-varying systems (where by "slowly" I mean on the timescales of seconds, or preferably longer) that can be considered to be in thermal equilibrium on timescales longer than that known?

Mosh pits turn out to be another example of a system that can be considered to be quite close to thermal equilibrium when considered over longer time scales. Mosh pits are a phenomenon in crowds in concerts of heavy metal and other music genres where participants move about in a seemingly random fashion, bumping into each other and thereby changing their velocity. As it turns out, their velocity distribution is then surprisingly well modelled by the Boltzmann-Maxwell distribution for a two-dimensional gas in thermal equilibrium.

This is explained beautifully in the paper

but for a shorter go I recommend the Sixty Symbols video Physics of Moshing: 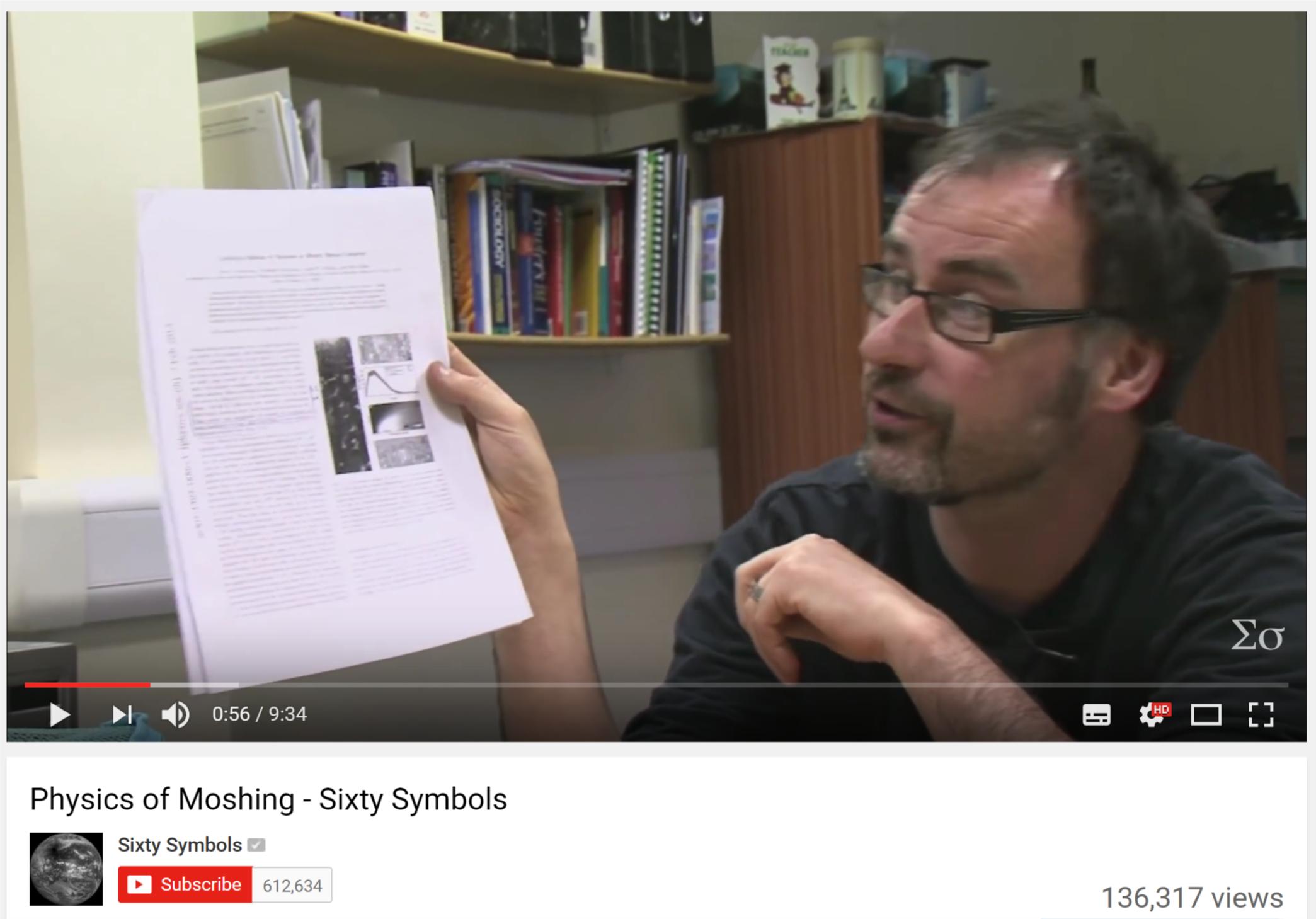 Globular clusters are an example of such a system. Their velocity distributions are close enough to Maxwellian that, observed instantaneously, they would appear to be in thermal equilibrium unless you paid very close attention to the high velocity tail, which is truncated. Depending on the number of stars in the cluster, you may not even be able to tell this apart from shot noise in the measurement. Over longer timescales, though, the cluster is evaporating. This happens because occasionally a star will gravitationally scatter a little bit and end up on an orbit whose energy is slightly positive and escape the system. This lowers the binding energy of the system, making it easier for another star to scatter onto an orbit that lets it escape, and so on. Eventually all that is left is a pair of stars locked in a Keplerian orbit.

There are some more details on the relevant timescales in this answer, and an excellent reference on the topic is this book (chapter 7, particularly 7.5, 7.5.2). Here is some content available online that explains that GCs are well-modelled by quasi-Maxwellian distribution functions, that they can in some contexts be treated as isothermal, etc. Be warned, the rabbit hole of globular cluster dynamics is deep.

Good question! When I started writing this answer I couldn't think of an example, but then I realised that Brownian motion fits the bill, as I'll explain below. So please forgive the somewhat tangential introduction:

To a reasonable degree of approximation, temperature can be thought of as energy per degree of freedom. I say approximation because in quantum systems the number of degrees of freedom can depend on the temperature as well, and then it gets complicated, but let's imagine for a moment that we live in a classical world where that doesn't happen.

The range of temperatures we observe in everyday life ranges up to a few thousands of Kelvins. (You can get much higher temperatures in some experiments, but only for very brief periods of time.) Multiplying by Boltzmann's constant, this corresponds to a maximum of around $10^{-19}$ Joules per degree of freedom in any system that you're likely to be able to sit around and watch for a long period of time.

The rate of motion this corresponds to depends on the mass associated with the degree of freedom. For example, if I surround a 1kg pendulum with air at 300K then both the gas molecules and the pendulum will have an average energy of the order $10^{-21}$ J. For the gas molecules this corresponds to a speed of about $500\,\text{ms}^{-1}$, whereas the pendulum will have an average velocity of about $\sqrt{10^{-21}}\sim 10^{-11}\,\text{ms}^{-1}$ once the system reaches equilibrium. However, the amplitude of its movement will be too small to measure, because the force restoring it to its equilibrium position will easily overwhelm its thermal movement.

However, for a mass of intermediate size, such an amount of energy gives rise to motion that is both slow enough to be perceived by the human eye, and of sufficient magnitude to be seen through a microscope. It was first observed by Brown in the case of pollen grains suspended in water. The grains jiggle around all over the place, but when looked at over long time scales they're in thermal equilibrium - their motion will continue in the same way forever. Unlike a pendulum the grains have no force restoring them to their original position, so they will wonder all over the container they're in.

The time scale can be increased by increasing the mass of the grains. However, as the grains get larger it will be harder and harder to eliminate forces that make them want to do things like sticking to the sides of the container. Still, I guess that with the right setup, and precise enough measurements, you could probably observe Brownian motion taking place on as long a time scale as you want.

Nathaniel is quite right, Brownian motion is indeed an example of what I'm looking for. Inspired on that, here's another example:

Consider a torsion pendulum immersed in air at temperature $T$. Then the mean potential energy of the pendulum's torsion is, for low angles, $\frac{1}{2}\kappa(\Delta\theta)^2=\frac{1}{2}k_B T$. Sensitive measurements of the pendulum's torsion angle are possible by shining a light beam off a mirror on the pendulum, and for appropriate temperatures and torsional constants the motion can be on the timescales of seconds or minutes.

I know I read this during my statistical mechanics course but I can't find a reference. (If anyone knows of one, please chime in!)

I would like to keep the question open for some time to see what other examples turn up. I would be particularly interested in examples with longer timescales, on the order of days or months, or hopefully even astronomical timescales.

in the following I'm imagining an expanding container of some ideal gas and the terms macroscopic and microscopic are employed in a real-space sense: if we define a "slowly varying macroscopic system" to be one with changes in the macroscopic parameters, that take place on time scales ($\tau$) much larger than the time scales associated with the dynamics of microscopic degrees of freedom ($h/kT$ for instance), then such a system is in equilibrium when looked upon at time scales between (with a geometrical mean) the two ($t_{e}$). For all this to be consistent, roughly speaking the microscopic degrees of freedom should follow a dynamics which amounts to no macroscopic changes on the scale $t_{e}$. Let's try to see how we can go one step further: if the slow changes in the macroscopic parameters (and I'm having the length of the container in mind) are for instance sinusoidal in time, one may try to see whether the system can be considered to be in equilibrium on some much larger time scale $t'_{e}$. This in not possible (in the container example) since the variations of the macroscopic parameters (i.e. the dimensions of the container) are not negligible at time scales (i.e. $\tau$) much smaller than $t'_{e}$. I'm aware that this is a very incomplete answer to your question, but I hope it leads to further insight, maybe through the discussions that follow.

20
Do gravitational many-body systems fall apart eventually?
9
Gross "temperature" of a globular cluster
5
Why is a perfect blackbody radiation completely unpolarized?
4
Why does it require such little energy to create the fastest thing in the universe?
6
To what extent has the canonical ensemble model in statistical physics been "directly" tested in the laboratory?
5
Thermalization of coupled classical oscillators