What is the Fermi Surface?

What is the Fermi Surface? I hope this question is not too elementary for this forum, and apologise in advance in case it is.

Allow me to explain my confusion. Given a solid, I believe I have some feeling for the Fermi level. I can understand it, for example, as the characteristic parameter $\mu$ in the Fermi-Dirac distribution of energy levels for the electrons in the system: $$f(\epsilon)=\frac{1}{e^{(\epsilon-\mu)/kT}+1}$$ ignoring for the moment other physical interpretations. Thus, it is the unique energy level that has probability 1/2 of being occupied.

The definition of the Fermi surface, on the other hand, is usually given as 'the iso-surface of states with energy equal to the Fermi level' in the three-dimensional space of wave-vectors $k$, for example in this Wikipedia article:

One situation seems to be straightforward, namely a Fermi gas of identical particles. Then $$E(k)=\frac{k^2}{2m}$$ and the Fermi surface is a sphere. However, if we are in an infinite periodic potential, the usual idealised model for Bloch theory, then the solutions to the Schroedinger equation come out in the form $$\psi_{kn}(r)=e^{ik\cdot r}u_{kn}(r),$$ where $u_{kn}$ is a periodic function and $n$ is a discrete index for energy levels. In other words, for each wave vector $k$,

there are many energy levels $E_n(k)$.

So the equation for the Fermi surface would actually look like $$E_n(k)=\mu.$$My question, therefore, is which energy level is the $E(k)$ that occurs in the definition of the Fermi surface? Perhaps there is one Fermi surface for every level $n$? (Assuming that the levels vary continuously over the momentum space, enabling us to consistently index the levels for varying $k$.)

If I could elaborate on my confusion a little bit more, I don't quite understand the definition in this answer to this question:

What is Fermi surface and why is this concept so useful in metals research?

It is stated that

'The Fermi surface is simply the surface in momentum space where, in the limit of zero interactions, all fermion states with (crystal) momentum $|k|<|k_F|$ are occupied, and all higher momentum states are empty. '

For one thing, as mentioned above, for any momentum $k$, there is an infinite sequence of fermion states. The other problem is that I'm not sure that the statement above defines a unique surface, even if I were able to somehow pick out a fermion state $\psi(k)$ for each $k$ that the statement refers to. (I would need to draw a picture to explain this point, which I don't have the competence to do.)

Everything you say is correct. The Fermi surface is defined to be the set of points $k$ such that $E_n(k) = \mu$ for any band $n$. However, typically the bands are spaced relatively far apart and don't overlap in energy, like this: 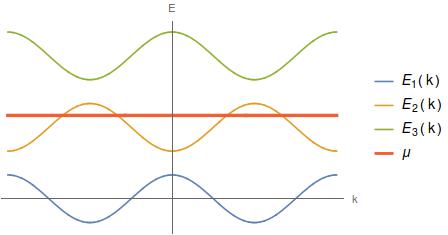 In more complicated/unusual systems though, you do need to keep track of multiple bands. For example, sometimes bands can touch or cross, and funny things can happen if you tune the chemical potential exactly to the crossing point. Even more unusually, two bands can share a whole finite range of energy - e.g. two cosine curves shifted vertically by a tiny amount. But these cases are very rare - for most everyday materials, $\mu$ sits in at most one band and you don't need to worry about this. (In fact, professional physicists like to find/create unusual materials where the chemical potential does sit right at a band crossing, precisely because such systems aren't as theoretically well-understood, so there's more to learn.)

BTW, in 1-D, like the plot above, the Fermi "surface" just consists of isolated values of $k$, but in 2-D it's usually a closed curve in the $k_x$-$k_y$ plane, and in 3-D it's usually a closed surface, like a sphere. Sometimes the Fermi surface can actually consist of two (or more) spheres, with one inside the other, and the filled "Fermi sea" for the relavant band lies in between them. This phenomenon is called "Fermi surface nesting." But if you're just learning about Fermi surfaces, then you won't have to worry about these complicated situations for a long time.

The Fermi surface is the surface in the reciprocal space (the dual of the real space you live in) delimitating the fermionic occupied states from the fermionic unoccupied ones at zero temperature. So it is a momentum ($k$) construction rather than an energy construction.

The logic is the following : try to put all together a given number of fermions. Since they follow the Pauli exclusion principle, you can not pack these fermions the way you want. Each time there is some room for a state in the momentum space, only one fermion can occupy this empty room. So you must start to pile up the fermions. It has a complete analogy with filling up a bookcase with books : you must use the next row when the previous one is full. You may use smaller intervals between raws, enlarge the size of each raw, ..., if you have too many books, you might use the next raw, which is nothing but using the next momentum branch in your dispersion relation (what you call $k_n(E)$). When you put the last fermion in your fermionic bookcase, the corresponding momentum state is called the Fermi momentum, the corresponding energy is called the Fermi energy, ..., and the surface of iso-$k$ at the Fermi momentum is called the Fermi surface.

22
What does Fermi level in the band gap mean?
4
Notion of anisotropic Fermi surface
2
What is the importance of Fermi sphere?
3
The surface states and Fermi arcs in Weyl semimetals
4
Why does an energy band crossing the Fermi energy mean the gap closes?