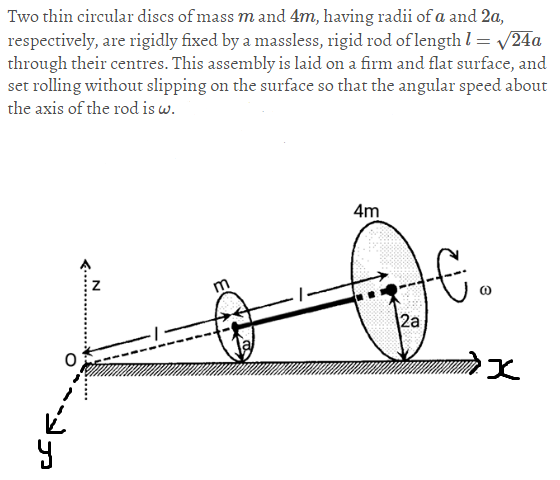 I want to find out the angular velocity vector of the Center Of Mass (COM) of the system.

My approach is as follows :

$\vec r$ being the position vector(positive) of the required point with respect to COM.

Using this property about the COM of the system(located on the rod), I get the magnitude of $\omega_{com}$

For the direction,wouldn't it would be perpendicular to both the position vector of the COM wrt O as well as the velocity of the discs(as otherwise velocities along the rod for both the discs would be different,as they have the same inclination)?

I have studied about something called Instantaneous Center(Axis?) Of Rotation, and used the property that $\omega$ about this point would be constant and equal to velocity of the required point divided by the position vector.

Here, I found that the required point is the origin O itself.

And so this situation is equivalent to finding angular velocity about O,which is pretty easy to calculate,with the fact that it is also the Instantaneous Center.

So are both my methods right?If so,is there any other easier route to calculate $\omega_{com}$?

The diagram that is drawn should give you the clue as to how to approach this problem.

As the no slipping condition is satisfied for both discs you immediately know the linear speed of the centres of both discs.

[As an aside you have the x and y axes in your diagram are the wrong way round for a right-handed coordinate system. I mention this because a lot of rotational dynamics is counter-intuitive and such a slip may cause problems in the future]

The linear velocities being as found indicate that the system is rotating about $O$ with the direction of the angular velocity of the centres of the discs being in the z direction $(\hat z)$.
Note it is not the direction of $\vec r \times \vec v_{\rm a}$ which is inclined to $\hat z$ even if the x and y axes have been switched.
This is your Method 2.

Not the answer you're looking for? Browse other questions tagged classical-mechanics rotational-dynamics rotational-kinematics angular-velocity or ask your own question.