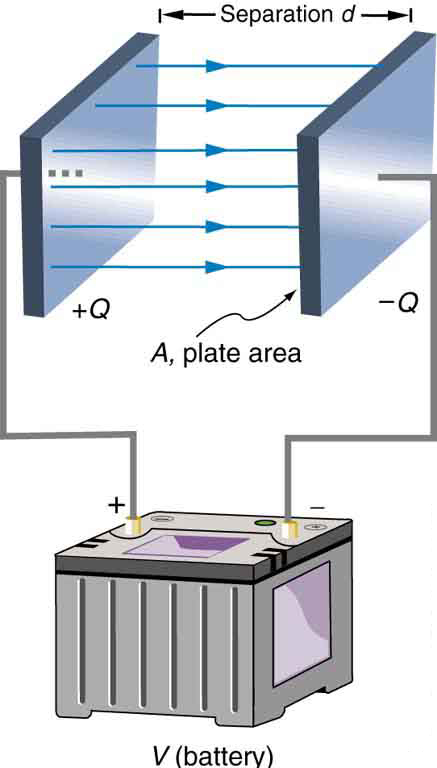 You have already stated correctly that there is no potential difference between the plates and the battery terminals due to the (ideal) wire connections. Moving the plates doesn't change this observation. However, there are transient currents in the wires during the movement. E.g., when you move the plates further apart, the capacitance diminishes in time and thus the charge $Q$ on the plates is reduced as a function of distance. This means, that a reverse current has to flow into the battery. If your wire has a finite resistance, this causes a voltage drop between the plates and the terminals during the movement.

Actually there is no flow of charge inside the capacitor.What happens actually is only field lines are developed as soon as we give potential difference .In other words there is polarized di-electric medium which induces charge on the plates when we give bias.We can also explain it in terms of displacement vector(maxwell's equations)

Q=CV C, the capacitance is inversely proportional to the distance. Since the plates are still attached to the battery, V, the potential difference will remain unchanged. However since the capacitance drops as a result of the increasing distance between plates, Q, the charge on the plates should be changed. So charges will flow back to the battery.

Not the answer you're looking for? Browse other questions tagged electrostatics electric-fields potential capacitance or ask your own question.

4
What is the role of battery across a Parallel plate capacitor having equal charge?
2
How do electrons distribute themselves along a wire attached to one pole of a battery?
4
Why does not a battery kept in empty space discharge on its own? If space between the terminals is empty, what prevents the electrons to flow?
0
Electrostatic Induction and Flow of Charges
1
Why doesn't the charge on capacitor plates flow from one plate to the other?
1
Energy consideration and charge flow in an RC circuit
6
'Simple' capacitor problem