Describing travelling waves carrying energy from one point to another

A simple harmonic wave in one-dimension (for simplicity) $y(x,t)=A\sin(\omega t-kx)$ in a medium is often presented as an example of a travelling wave. But such a plane wave is infinitely extended throughout the whole medium at all times-it is ever-existing at all points from $t\to-\infty$ to $t\to +\infty$. Unless it is a pulse or a finite wavetrain does the idea of propagation from one point in the medium to another make any sense?

Moreover, for such plane waves, it is only the phase that propagates not the energy. If one calculates the total energy density for such a wave, the energy doesn't have a propagating wavelike behaviour.

In any case, the actual waves in a medium are always pulses or wavetrains, and at any given time the energy must be concentrated in a finite region of the medium. As the wavetrain propagates, the energy density should also propagate. How does one describe this mathematically?

"Phase" is just a way of talking about how much energy there is at the current point, relative to a cyclic pattern. The current "phase" changes precisely because the energy is propagating through the medium.

If one calculates the total energy density for such a wave, the energy doesn't propagate like the phase of the wave does.

The wave takes up the entire medium and is thus "in the same place" at all times. The "center" of the wave (the center of "mass" of the energy) will either be stationary or move back and forth within one wavelength of the same spot. So either way, you're right that the wave itself doesn't do much traveling.

But what is traveling is the energy at a point in the medium. Let's graph the function. 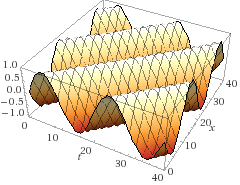 Let's pick a point at maximum energy at a specific time (maroon). 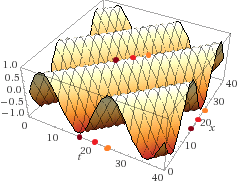 A few moments later (red), the energy seems to have moved to a different point in space. Another few moments pass (orange), and the energy has moved some more. So we can say the energy traveled from maroon to orange over time.

Alternately, we can look at a specific point in space over time. 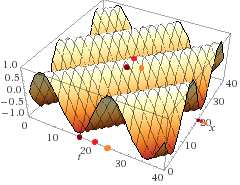 At the maroon point (behind the "hill" on the curve, pretend the graph is transparent there), the energy at the point is low, but increasing. The energy moves into that point at time red. Then it moves past the point, leaving lower energy at time red.

Let us define some relevant parameters:

The phase speed, $V_{ph} \hat{\mathbf{k}}$, is not just $\omega/k$, it is actually the real part of this ratio, or $\Re\left[\omega/k\right]$, since both the frequency and wavenumber can be, in general, complex. Note, this speed is not a true velocity vector, since the vector actually derives from \mathbf{k}.

Unless it is a pulse or a finite wavetrain does the idea of propagation from one point in the medium to another make any sense?

In any case, the actual waves in a medium are always pulses or wavetrains, and at any given time the energy must be concentrated in a finite region of the medium.

I am not sure I follow. The "concentration" of a wave into a finite region does not govern whether said wave will transport energy from one location to another. For instance, one can have standing waves that are spatially limited but do not carry energy.

As the wavetrain propagates, the energy density should also propagate.

How does one describe this mathematically?

As I said before, in the absence of mass-transport and dissipation, the wave energy (which is proportional to $\lvert A \rvert^{2}$) will propagate at $\mathbf{V}_{g}$.

Side Note: If you really want to get a deep, intuitive understanding of waves I recommend delving into Whitham's book referenced below.

I've decided to add another part to this answer, instead of adding a new answer, because this will be similar to the ideas presented there but in a different way. I was reading Messiah's Quantum Mechanics and came across a way of converting a wave into a wave packet mathematically. In his case, it was for modelling matter waves, but as a general case it will work well.

Working from the definitions presented by honeste_vivere in another answer, we first consider a one-dimensional wave of the form $$\psi (z, t) = \cos(kz - \omega t) $$ Which we already know is defined at all points, and has wave character at all points. We could also represent this cosine wave with a complex exponential or a phasor, but we will use the cosine representation for now.

The parameter $k$ is the wavenumber, which is like a density of waves, a number of wave peaks per unit distance. This is not independent of angular frequency $\omega$, and it can change with time and position.

Now we have this wave, but we want a wave packet. How can we achieve this?

This may seem a bit strange at first. Wave packets are represented as local perturbations, but they are the sum of many wave forms.

We will define our wave packet as $$\psi = \int _{-\infty}^{\infty} f(k') cos(k'z - \omega' t) dk' $$ Where $f(k')$ is an amplitude function which will actually help us shape the wave packet by giving an amplitude to each value of $k'$. This function should have a peak around the region where $k'=k$, so that our wave characteristics (frequency and wavenumber) are most pronounced.

Now we need to determine what $f(k')$ is. To do this, we select a value of the wave function $\psi$ at $t = 0$, for instance $$\psi(z, 0) = e^{-z^2} \cos(kz)$$ Which is a simple wave packet. Now we use this initial value to determine the function $f$ by inverting our expression for $\psi$. $$f(k') = \int_{-\infty}^{\infty} \psi(z, 0) cos(kz) dz$$ Note at this point: If it seems like this expression came out of thin air, it's because it is actually an inverse fourier transform, which technically also has an inverted imaginary sine component, but I've left this out for simplicity, at risk of leaving the reader puzzled by this equation. Another derivation of the wave packet can be found on Wikipedia which uses imaginary exponential form that might help to understand this part if you're familiar with Fourier transforms.

Now it should be understood that this wave packet is non-dispersive, meaning it will keep together in the same envelope as it travels. A dispersive wave packet, such as those found in the Schrodinger wave equation, would spread out, or disperse, over time as it travels.

I really like this question! This is something I was looking into not too long ago. The problem that you're having is that a one-dimensional wave is described by $A \cos(\omega t - kz)$ and this is defined for any value of $z$ despite the fact that the wave is supposed to be travelling. Note that I'm using $\cos$ and $z$ instead of $\sin$ and $x$; I'm more used to seeing it this way, I hope you don't mind.

To represent a one-dimensional wave that has a source (excitation) and limited energy density, we cannot use a simple trigonometric function alone such as $\sin$ or $\cos$. These functions are periodic, and exist at all points in 1-dimensional space. Being periodic, the only way to change the envelope is to multiply the function with an envelope function such as $e^{-z}$ which has the amplitude decrease exponentially as $z$ increases from $0$.

With the right envelope function, it might be feasible to model many time- and space-dynamic wave systems. But this is sort of cheating - one must know in advance the form of the wave, and that is not interesting.

So instead we will assume that we have:

For example, if we consider a taut string system, we want to apply a mechanical excitation to a point $z_0$, and model the response of the system to this excitation. If we have an electromagnetic field system, we might select the excitation source as a source current or potential difference, or electric or magnetic field values.

Depending on your system, these could be Maxwell's equations, or an equation that models the string including things like damping. Problems such as this fall under the domain of dynamics. The methods of solving such problems fall under the topic of differential equations, and most realistic systems require discrete numerical methods to solve, such as the finite element method (FEM), finite difference method (FDM), finite volume method (FVM), finite difference time domain (FDTD) method (for EM), etc.

To model a physically traveling wave in a system, you must evaluate a dynamic system with an excitation source of some sort.

P.S. I would list sources, but this topic is so broad, and I'm not familiar with much of the literature on the field as a whole.

Not the answer you're looking for? Browse other questions tagged waves electromagnetic-radiation maxwell-equations solitons plane-wave or ask your own question.

0
Can the equation $v=\lambda f$ be made true even for non sinusoidal waves?
2
Superimposed state vs. zero amplitude state
11
What Exactly is a Shock Wave?
0
How to propagate $E_x (x,t) = \exp(-t^2/\tau^2-i\omega_0 t) \exp(-x^2/w_0^2)$ in finite difference time domain (FDTD) analysis
11
Are non-zero-area pulses of electromagnetic radiation possible?
2
Is a seismic gravity perturbation a gravitational wave?
5
Is Huygens principle true for any shape of wavefront?