Does the buoyant force always point towards the free surface of the liquid?

For example let us take this figure 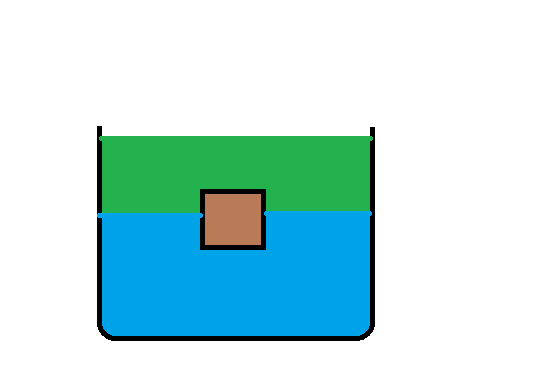 Here let's say we have a wooden block present in between the two different liquid. Now I am sure that the liquid beneath would exert a buoyant force upward, but what should be the direction of buoyant force from the liquid present above the block.

Buoyancy is the net force of all the particles hitting the surface of the block. Regardless of the liquid type, there are forces pushing up, down, left, right, etc. 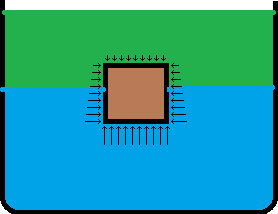 In this case, there isn't any of the blue liquid above the block, so the only force is pushing up. Obviously, this is a net force pushing up.

Likewise, there's none of the green liquid below the block, so the only force is pushing down. Again, there's an obvious net force, this time down.

This is the same as what happens when the block is floating on top of the water. The air above the water is your second fluid in that case.

1
Metallic coin over wooden block in glass of water
1
What is the direction of buoyancy in the bulk of liquid on earth?
0
Why isn't the apparent weight of a body in a fluid equal to the buoyant force? Why does buoyancy reduce it instead?
4
Does buoyant force vanish if there is no liquid below an object?
0
buoyant force basics
0
Accelerated system + container . Tension to be calculated