What provides the centripetal force?

Figure below shows the situation.

I find that an easy, never-fail way to analyze the forces acting on an object in circular motion is:

mv²/r is the amount of center-directed force necessary to make the object, which constantly wants to move in a straight line, move in a circle instead.   It's often called the centripetal force, but that's just a label we put on the combination of identifiable forces like gravity, normal force, tension, etc., that gives us mv²/r.

Here is a force diagram (a.k.a. free body diagram) for any car-on-a-(circular)-hill scenario:

Notice that there are no forces labeled as centripetial force, or mv²/r.  Our equation becomes $$mg(sin\theta) - F_N = mv²/r,$$ where $\theta$ is the angle that the position vector of the car makes with the horizontal, and FN is the normal force exerted on the car by the hill, or road.

So yes, in the case of a car going over a circular hill, we see that the centripetal force is the difference between the car's own gravitational force and the normal force exerted on it by the hill, as you suggested.

We see that only when v = 0 is the normal force exerted by the road on the car equal to the gravitational force on the car.  In that situation they are equal and they oppose each other, so they look like a Newton's Third Law pair.   But they are not.  Note that they act on the same object.

I will assume you are talking about a loop (a vertical circle).

Centripetal force is the name for the total force that pulls towards the circle's centre. There will only be two forces acting, as you also point out: Normal force $n$ from the road and weight $w$ of the car. And remember that normal force is always perpendicular to the road.

So no, there is not really a golden rule saying that the centripetal force must be the difference. It purely depends on their directions. The normal force changes direction all the time here, and the weight gradually has less and less or more and more influence depending on the position in the circle.

Without a picture of what exactly you mean by 'moving up hill along a circular path', it is hard to give a specific answer.

A general answer, however, starts in my opinion with discarding the term 'centripetal force' and replacing it by 'centripetal acceleration'. The latter term implicitly tells that it is not something on its own, but the result of several different forces.

If you decompose this equation in a direction tangential (T) and perpendicular (P) to the velocity/direction of motion, you get

This can be applied to any free body diagram: 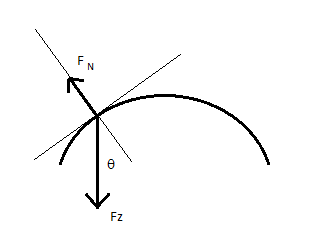 Here the perpendicular part of Newtons second law (the part about the centripetal acceleration) becomes:

As D. Ennis states in one of his comments under his answer, $F_N$ is smaller than the perpendicular part of gravity: a part of the gravitational force is used to provide the necessary centripetal acceleration. The rest must be compensated by the normal force.

Reading the above answers and the pertaining comments I have the impression that there is still some confusion regarding the explanation of this problem. Here I also use an inertial frame of reference like the other answers and I use the notation of D. Ennis' answer. (In my prior answer below I used a co-rotational frame of reference.)

The centripetal force $F_{cp}=mv²/r$ in the direction of center of the circular motion is exactly the force that is required to keep the car that has the tangential speed $v$ on the circular trajectory. What provides this force? It is derived from the component of the gravitational force normal to the road (in the direction to the center of the rotation) $F_{gn}=mgsin{\theta}$. Only when the gravitational force component is larger(equal) than the required centripetal force $$F_{gn}≧F_{cp}$$ will the car follow the circular trajectory! What then causes the car to have exactly the required centripetal force $F_{cp}$? It is the counteracting (away from the rotation center) normal reaction force $F_n$ of the road on the car (preventing the penetration of the car into the road) that adjusts itself exactly to the value to produce together with $F_{gn}$ the required centripetal force: $$F_{gn}-F_n=mgsin{\theta}-F_n=mv²/r=F_{cp}$$ What happens when the inequality $F_{gn}≧F_{cp}$ is not fullfilled? Then the circular path cannot be followed, the car flies off with tangential speed $v$.

The centripetal force is provided by the vector component of the gravitational force on the car normal to the hill surface which is in the direction of the center of the circular motion. This normal force minus the centrifugal force is equal to the normal force of the hill back on the car.

Not the answer you're looking for? Browse other questions tagged newtonian-mechanics forces free-body-diagram centripetal-force or ask your own question.

2
Why is the centripetal force vector on a banked turn horizontal rather than parallel to the incline?