A pipe containing static fluid at ambient temperature is located in an air plenum (edit: duct) with air flowing along the pipe at an elevated temperature.

Assuming the pipe is full of water and static and the pipe is in the centre of the duct with a certain air velocity within the plenum. Is there a way to calculate the temperature of the inner and outer surfaces of the pipe with respect to time?

I have tried a few steady state calculations using a resistance network and assuming flat plate forced convection on the outer of the pipe, then using the specific heat capacity of the pipe and a time step to calculate an increase in temperature of the pipe, however I believe this is the completely wrong approach for multiple reasons one of which is that it does not take into account that there is fluid within the pipe. 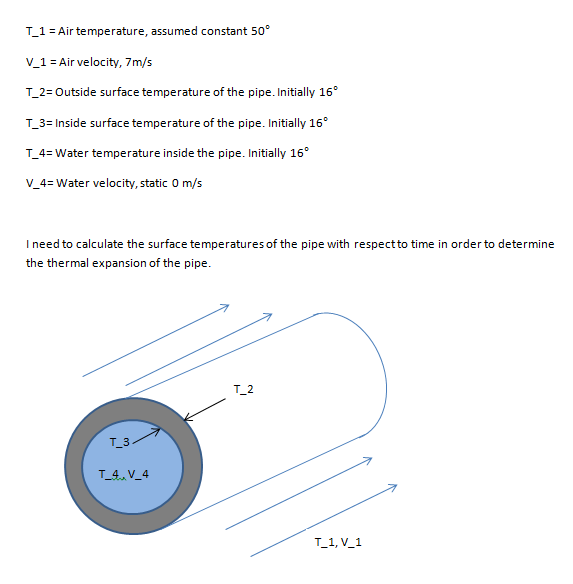 The steady state conditions will be these: Conduction at the surface of pipe and convection on the interface between pipe and water. The air will keep the outer section of pipe at a temperature same (as that if air) and convection in water.

However, the analysis you are thinking to do is transient i.e. when the temperature of the pipe is not yet same as that of air in the plenum. So you take several other factors: Heat flux from air to pipe, and from pipe to water. Biot numbers and specific heat of pipe will be essential along with the instantaneous temperatures. Time will primarily appear in the temperature of pipe, and thus with water.

The main error on your part is that you are doing transient calculations to steady state boundary conditions.

Is there a way to calculate the temperature of the inner and outer surfaces of the pipe with respect to time?

This is very difficult to model adequately. By definition there is a thermal gradient $\frac{\partial T(r,t)}{\partial r}$ in the radial direction of the pipe and fluid.

But in the case of a fluid, a thermal gradient will also cause a density gradient due to thermal expansion and thus upward flow of hot fluid inside the pipe.

This means probably having to combine Fourier's heat equation with Navier Stokes equations of flow, to figure out the transient temperature gradient of the fluid.

The problem would be somewhat simpler if the material inside the pipe was a homogeneous solid. In that case, assuming no temperature gradient in the $z$-direction, two temperature functions $T_1(r,t)$ and $T_2(r,t)$ (resp. for the pipe and its solid content), could be defined.

In this case the Laplace operator reduces to:

But the solution would not take convective flows into account.