Will something accelerate forever if a constant force is applied to it on a frictionless surface? If so how?

I don't understand the fact that let's say hypothetically I was pushing a block on a frictionless surface, and I kept applying the same force on the object how it would keep accelerating! Wouldn't there have to be a certain velocity where it would stop getting faster? If not then what is actually acting on the object to cause it to accelerate infinitely?

Where $a$ is the acceleration, aka the rate of change of velocity $v$ in time.

But when the velocity $v$ starts approaching the speed of light $c$, Newtonian physics no longer applies and we need to apply Einstein's theory of relativity. This prevents the object from exceeding the universal speed limit, $c$.

When special relativity is taken into account, for an object accelerated at constant rate $a$ with respect to its instantaneous rest-frame, then as a function of proper time $T$, the ratio of the rocket's velocity $v$ (with respect to its initial rest frame) to the speed of light $c$ is given by

So the graph of velocity versus proper time looks like this: 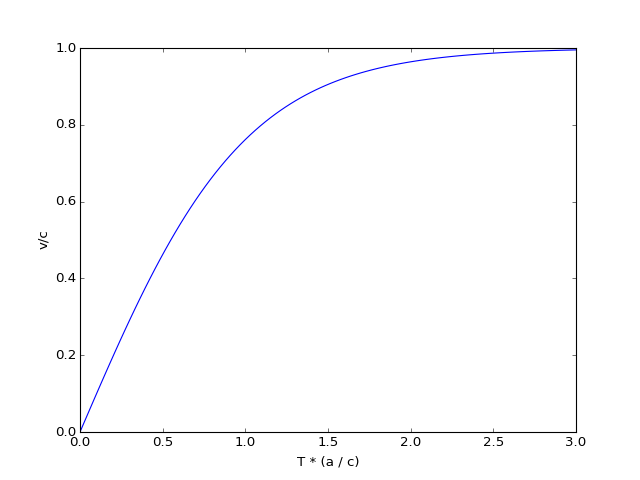 The velocity initially increases linearly with T, as you'd expect in the non-relativistic case, but eventually the velocity asymptotes at $c$.

One way to think of this scenario is to imagine the pressure on your finger (I'll assume you're pushing with your finger). If you are pushing with a constant force the pressure on your finger will remain constant. In practice as the object accelerates you will have to move your finger faster and faster in order to 'keep up' and maintain this pressure. Remember that in this thought experiment that the pushing entity must accelerate just as fast as the object in order to maintain the force.

You seem to be confused because this contradicts everything you know about physical objects. That's a reasonable response! A box continually speeding up while being pushed sounds preposterous.

However, if you could continually push the box, and if there were no friction slowing it down, it would continually accelerate. (Eventually you would observe relativistic effects as its speed became comparable to the speed of light.)

Two parts of this hypothetical situation are extremely strange: the continual force, and the frictionless surface. Both of these are far outside anyone's experience. Usually a rocket will run out of fuel and stop accelerating, and usually friction will become stronger and stronger until the object slows.

A spaceship that had a ramjet (a hypothetical engine that collects the sparse hydrogen of space and uses it as limitless fuel), flying in deep space with essentially zero friction, would act that way in reality. It would continually accelerate without limit. (as it approached lightspeed, it would increase in mass instead of velocity, but I don't think you're asking about relativistic effects.)

What you're asking about is described as a Rindler coordinate system. So, the answer is: yes, the acceleration is always positive. The energy is always increasing. And different inertial observers will have different perspectives on the world-line traced out by a Rindler observer.

General relativity has a different look on the problem - in GR, there is no acceleration on an orbital path. Relativity gives you a few more kinks as well - for example, the maximum relative velocity you can have is a tiny bit shy of the speed of light. Despite this, if you had a space ship with a magical propulsion system, you could continue accelerating indefinitely - you on board would feel constant acceleration, while somebody observing your flight from Earth would just see your velocity approach the speed of light slower and slower.

Consider that instead of pushing the block in the direction it was moving you could push it perpendicular to its motion. This would cause it to change direction (which is still acceleration) without speeding up. The result would be a circular motion which would accelerate infinitely.

The body will accelerate untill... No, it never stops accelerating. And it never reaches speed of light.

Theoretically, it would get infinitely close to C, where it would require more and more energy to accelerate the same amount, and if your friction less surface is long enough and you can somehow keep applying this force to the block.

Not the answer you're looking for? Browse other questions tagged acceleration or ask your own question.

0
If in space with no opposing force,will a body of 1kg pushed with 1N force keep on accelerating 1m/sec every second? When will it stop accelerating?

6
Finding the force of friction of a moving object and its change when it accelerates to a constant speed
1
Is it true that a book kept on the table is accelerating with $9.8 m/s^2$?
0
Duration of the force exerted and the acceleration
1
What causes the block to move horizontally on a FIXED wedge
0
Inertial mass, and energy required to accelerate from 100 kph to 101 kph versus 1000 kph to 1001 kph