In physics, negative resistance (NR) is a property of some electrical circuits and devices in which an increase in voltage across the device's terminal results in a decrease in electric current through it.

What if a decrease in voltage cause an increase in current?

Will we also call it the negative resistance?

Plus can we define negative reactance also as "in which an increase in voltage across the device's terminal results in a decrease in electric current through it"?

You have to be careful as to whether you are talking about resistance $R = \frac V I$ or small signal / incremental / dynamic resistance $R_{\rm incremental}= \frac {dV}{dI}$.

If the V_I characteristic graph of a circuit element or circuit is a straight line through the origin then the Resistance $\frac V I$ is a constant and is the same as the incremental resistance.

Negative resistance where the voltage drops as the current increases sometimes occurs in circuits which have voltage or current controlled voltage/current sources.

Negative incremental resistance where the the gradient of a V_TI characteristic graph is negative does occur sometimes and over a region of operation an increase/decrease in the voltage produces a decrease/increase in the current.

Now when it comes to reactance and impedance the situation is more complicated.

I guess capacitive reactance is called negative reactance because across a capacitor rise in voltage cause fall in current passing through it. 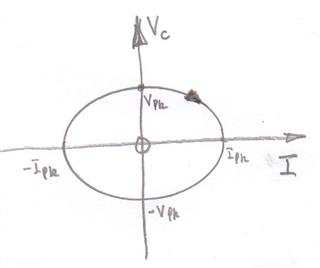 The graph is actually an ellipse and as time progresses a point on the graph moves in a clockwise direction.
This graph is the addition of two perpendicular simple harmonic motions which are at right angles to one another and $90^\circ$ out of phase.
For an inductor the time progression would be anti-clockwise.
If you were interested in the incremental reactance at a given time then it would be positive in the second and fourth quadrants and negative in the first and third quadrants.

So the statement you made about the capacitor is only true half of the time.

The introduction of a negative sign is really to do with the fact that the voltage across a capacitor lags the current through the capacitor by $90^\circ$.

When the frequencies are the same but there are phase differences it is convenient to represent voltages and currents as phasors or as complex numbers.

In this representation the reactance of a capacitor is $Z_{\rm C} = \frac {1}{j\omega C}$ and for an inductor $Z_{\rm L}= j \omega L$.
These are nothing to do with instantaneous values of the current and voltage rather the magnitude of the reactances is the ratio of peak voltage to peak current and the phase information is contained in the position of $j = \sqrt{-1}$. 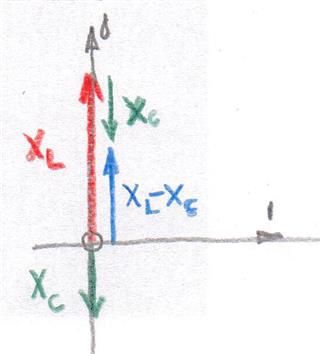 The minus sign in front of the capacitor is there because in a series circuit the instantaneous voltage across an inductor differs in phase from the voltage across a capacitor by $180^\circ$ and so to find the the total of these two voltages one only needs to take one from the other and so the same is true of the magnitudes of their reactances..

What I have tried to explain is that negative capacitor reactance is not the same as negative resistance.

2
Using the loop rule while charging circuits
0
Why is current through different elements of a series circuit the same? [Not a duplicate]
2
How can a battery offer resistance and act as a voltage provider?
0
LC circuit current?
0
Relationship between Electric Fields, Potential Difference and Resistance in Circuits