Conservation of angular momentum and spin 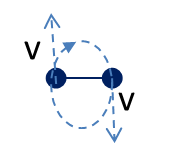 While I understand that they cancel to zero can't they interact with translational momentum to alter the balance?

Yes, total angular momentum is the sum of the orbital angular momentum and the spin angular momentum. However, spin is not the rotation of the molecule around its own axis. It is a little confusing in that you first talk about a point mass particle and then about a molecule consisting of two atoms. To avoid confusion, I'll try to give you a general understanding.

In any system one can compute the orbital angular momentum by computing $$ \mathbf{L} = \sum_n \mathbf{r}_n \times \mathbf{p}_n $$ for all the particles/point masses in the system. Here $\mathbf{p}_n$ represents their momentum vectors and $\mathbf{r}_n$ are their position vectors relative to some common origin. This means that in general the orbital angular momentum depends on the definition of the origin.

Spin is associated with an internal degree of freedom of the particles. For fermions, for instance, one can have $\mathbf{S}=\pm \hbar/2 \hat{z}$ (assuming we measure it along the $z$-direction). It is important to note that spin does not correspond to a physical rotation of the particle or system of particles. It is an intrinsic property of the particles.

Not the answer you're looking for? Browse other questions tagged angular-momentum rotational-dynamics conservation-laws or ask your own question.