Qualitative relationship between a function f(x) and its fourier components

In finding the reason for a definition of group velocity like this, $v_p=\frac {d\omega}{dk}$, I found a lecture note here http://www.hep.man.ac.uk/u/roger/PHYS10302/lecture15.pdf In the last page of this note, the authors give a more general interpretation on the definition of group velocity using Fourier transformation. One thing I can't understand is the qualitative relationship between a function f(x) and its fourier components F(k). He says that 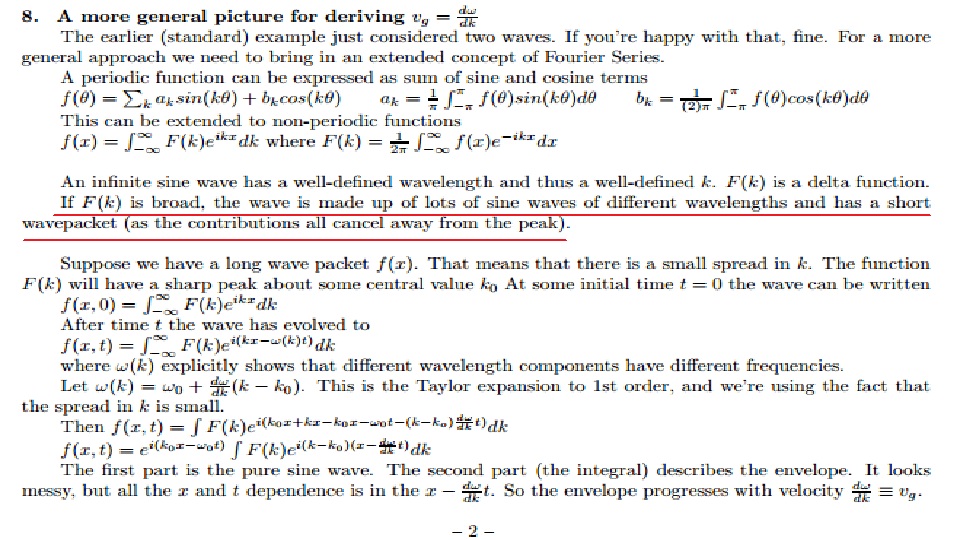 I wonder why F(k) is broad and has a short wavepacket, and why the contributions all canceled away from the peak.

The inverse relationship between $\langle (x - \langle x\rangle)^2\rangle$ and $\langle (k - \langle k\rangle)^2\rangle$ is related to the fact that sine and cosine waves have infinite extent. So, the closer to zero the function is far from its middle, the more Fourier components you need for the approximation to average out to zero in those areas where sine and cosine of the low frequency components still have the same amplitude they had near the mean.

On a related note, you can work out from the facts that cosine is even and sine is odd the following statements:

More fun is to note the relationship between a function's moments, $\langle x^n \rangle$, and the coefficients in the Taylor expansion of the Fourier transform. When there aren't any problems with divergence or analyticity, and a symmetric Fourier transform is used: $$\langle x^n \rangle = \left. \frac{\partial^n \tilde{f}(k)}{\partial k^n}\right|_{k=0},$$ and vice versa for $\langle k^n\rangle$ and the Taylor series of the function.

Not the answer you're looking for? Browse other questions tagged waves mathematical-physics or ask your own question.

7
Deriving group velocity
4
Implicit Postulate of Quantum Mechanics
2
Distributions (generalized functions) over manifolds
0
Power of a wave in a string
2
Does the position operator have enough eigenfunction to span the whole Hilbert space?
5
How to calculate the phase and group velocity of a superposition of sine waves with different speed and wavelength?
3
Why are scattering states orthogonal in general?