Energy balance for Earth with regards to greenhouse effect

Following image (source: Norwegian website) portrays the energy which the Earth stores to maintain 14 degrees Celsius for the surface and the oceans : 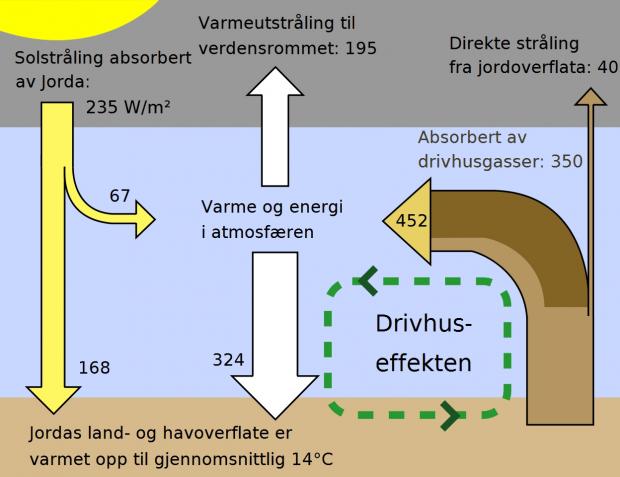 I tried to make sense of these numbers and quickly came to the conclusion that the numbers, if correct, would imply that the average temperature is not 14 degrees Celsius but almost 30 degrees Celsius! Here are the calculations I performed assuming Earth is a black body object (using the Stefan-Boltzmann Law) :

Are the numbers off on the image, or are my calculations wrong ? Am I wrong to make the assumption by approximating Earth as a blackbody ?

Let me know if anything is unclear (if a translation for the image is required).

Edit: According to following image (provided by NASA) 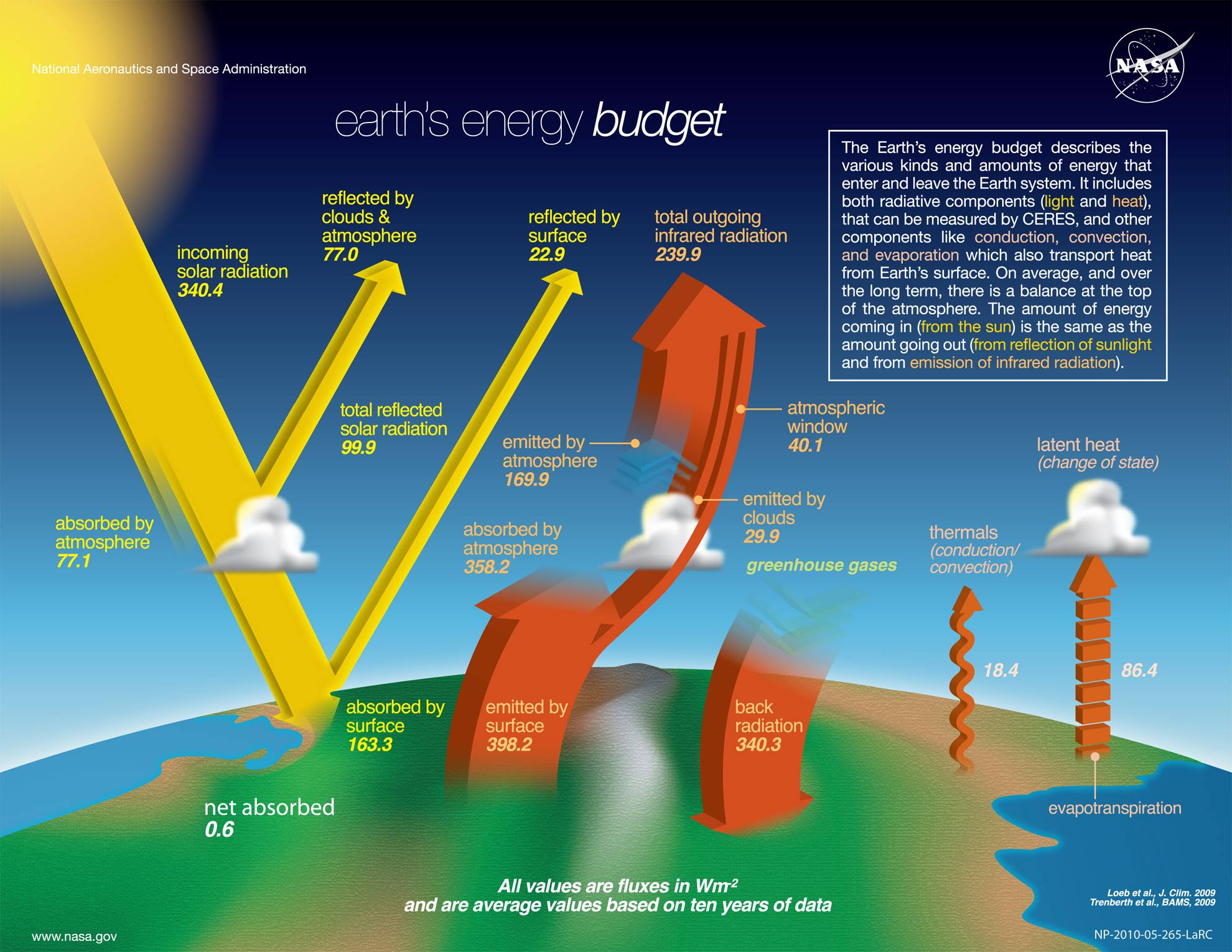 Edit: From the following lecture and wiki-article, the amount of energy reflected (due to the albedo effect) is about 31 percent. On the NASA image, the amount reflected is at 40 percent. I am not sure how to interpret that. I would have expected the albedo number to be lower (over time) due to the ice melting near the poles. According to this source provided by NASA, there is no global trend on the albedo effect. The albedo is constantly shifting, there is simply a lot of variability.

If you look at the NASA figure: The infrared radiation coming from the Earth's surface is only $398 W/m^2$. The reflected radiation does not figure into this calculation; only the absorbed and emitted radiation.

$398 W/m^2$ works out to about $16.5^\circ C$. That is indeed higher than $14^\circ$. The surface emission is the sum of temperature-driven black-body-like emission and an infrared contribution from the radioactivity inside the Earth's core and mantle.

Albedo is simply a number made up to make the greenhouse theory valid. The surface almost never gets such a low intensity of irradiation as a couple of hundred watts. The idea to make an energy budget with flux values is very misleading since flux measured in watts is instantaneous and is really a measure of power in a second, but energy is measured over time and should be in kWh or similar. Albedo should be trashed and instead we should only use emissivity. The weirdness in reducing irradiation with 30% and divide it by four, using it as the value of solar irradiation, and claim that irradiation is not enough to heat the surface is not honest. In reality the earth surface gets 1000W over big parts and it is well enough to heat the surface to 288K. The greenhousetheory is based on calculation of earth emission temperature, not the temperature of irradiation. Through the geometry of a sphere TSI is divided by 4pir^2 and in the simplified version pir^2 is cancelled out. Dividing by four results in 4 small suns each radiating at 240W/m^2, from TSI of 1370-albedo of 30%. 4*240 gives us the level of irradiation used, 960W/m^2. If that number is used to heat 1m^2, as the sun does in reality, there is enough energy to heat the surface to more than 288K. But since half of the receives the energy that gives the temperature for the whole sphere, irradiation of 1m^2 will be emitted in 2m^2. So we divide by 2: 960W/2 gives 480W=303K.
I think albedo is a balancing function shedding excess energy and at the same time shielding, so i think it should be ignored.

If we use another way of geometrical calculation, the volume of a sphere, to get incoming energy, and the surface of a sphere for outgoing, the numbers adds up perfectly. A spherical cubic metre is 4/3pi*r^3 and with the same routine pi and r is cancelled out. There are two spherical volumes, atmosphere and surface, so irradiation has to be divided twice before absorbed by surface. Once gets us 1370/(4/3)=1027W/m^3 of energy density just above the surface, which is in line with observations. The second time we get 770W/m^3, which is the amount of energy absorbed in the solid mass of earth. The same routine applies here as earlier, it is absorbed through 1m^2 but emitted by 2m^2. That gives 385W/m^2 when emitted by the surface. Exactly the amount in the "energy budget". When 385W is divided by the spherical surface (divided by 4) that gives off the atmospheres radiation, we get 96W/m^2, which is very close to the emitted radiation from the atmospheres outer boundary, "the window". If we do the same thing to the energy density of irradiation at the surface, we get 257W/m^2, which is very close to gh-theorys energy balance. This is actually the balance point for surface irradiation and the atmospherical volume heated by earth emissions. If we subtract the surface-atmosphere balance from the surface flux, we get 123W/m^2, which is also very close to the troposphere´s flux density at the tropopause. Using TSI without albedo to get the total balance point of the system, we get 1370/4=342,5. So, the energy balance between irradiation and the surface as it heats the atmosphere, would be very close to the surface. The emitted flux density measured by satellites is actually measuring how much the surface is cooled by air. The difference, about 120-130W, is the heat transfer from surface to air and seems to be governed by waters evaporation and condensation, transporting energy from the surface and dumping it in the atmosphere. Just as we are used to, pour water on something hot and watch it cool. Or, use your fireextinguisher with dry ice (carbon dioxide, but you know that) and watch it cool superfast. Someone is pulling a big prank on the world with the greenhouse theory, claiming that water and carbon dioxide heats it up, it is the opposite of how they work in all other situations. Everything in the earth-atmosphere system is carried by solar energy, everything. No gas or water adds any energy, they don´t heat anything. They get heated. The whole system gets heated.

Not the answer you're looking for? Browse other questions tagged energy radiation thermal-radiation or ask your own question.

6
Kinetic Energy vs. Potential energy with regards to creating particles
1
Equations for the two-plane model of the greenhouse effect
6
Energy balance for beta decay of cobalt-60
4
Does one square centimenter of the sun core really radiate this amount of energy?
2
Modeling a wine cooler heat loss to ambient
5
Strength of moonlight
1
beta+/ec decay of Al-26: confused about energy balance