What is the shape of the detector pattern in a Stern-Gerlach experiment with a beam source (instead of a fan)?

I've been delving into Bell test experiments and woefully most sources fall into either dense physics papers, or very low level simplifications with lots of handwavium.

One thing in particular I'd like to understand a bit better is the Stern-Gerlach device. The original experiment used a rectangular or fan-shaped beam, which results in a pattern on the detector kind of like a Gaussian shape, with a mirror image, like this: 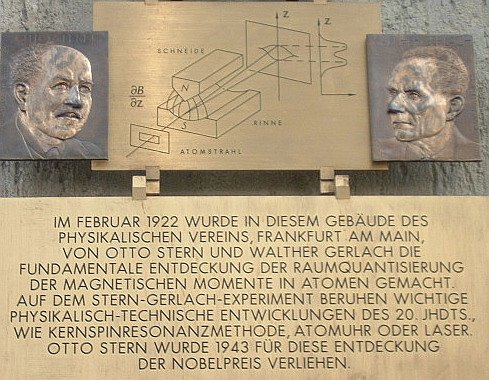 Accounting for blurring/uncertainty and such, if you trace the local maxima you end up with this cat-eye shape.

Now as I understand it, spin magnetic moment $\vec{\mu}_S$ is a vector in 3-space, and firing something with net SMM (i.e. silver atom) through the SG device "measures" $\vec{\mu}_S$ along the up-down axis of the device, which we call $z$. Atoms which deflect maximally up or down are said to have spin aligned to that axis. But what happens to particles that don't have $z$-aligned spin? In other words, if the aperture were beam-shaped, how would the pattern on the screen appear, and why?

My intuition is that it would be ring-shaped or elliptical, since particles with non-perfectly-aligned spin would have to deflect less (along the SG device's major axis). But intuition and QM rarely mix.

Edit: additional question: Does the SG device alter the spin moment of the particle (much like torque on a gyroscope causes procession)?

$\newcommand{\ket}[1]{\left|#1\right>}$ As you say yourself “intuition and QM rarely mix”, and it specifically is the source of your misconception. If the magnetic moment $\vec{μ_S}$ were indeed a classical well defined 3D vector interacting classically with a magnetic field gradient.

But the magnetic moment of silver atoms is quantified, and is a spin $½$, and therefore any measurement of this quantity can only take two values, $±μ_S$. The probability to obtain each value would depend on the original state.

Suppose you prepare a polarized pencil beam in a well defined direction $(θ,φ)$, and that the magnetic gradient of your Stern—Gerlach apparatus is along the $z$ direction, the beam splits along the $z$ direction, with a fraction $\left(\cos\tfrac{θ}{2}\right)^2=\tfrac{1+\cosθ}2$ of the atoms going up and a fraction $\left(\sin\tfrac{θ}{2}\right)^2=\tfrac{1-\cosθ}2$ of the atoms going down (and $φ$ has no influence).

Therefore, if the beam is polarized in a direction deviating from $z$ ($θ∉\{0,π\}$), the atoms split into two different spots. If the beam is totally unpolarized, you average over all angels and find a 50:50 split among the two spots.

If the gradient is not strictly along a constant direction, the computation becomes tricky, and we can have some fancy interference effects.

edit to answer your “edit” question: As a measuring apparatus, the Stern—Gerlach apparatus project the spin in the $\ket{↑},\ket{↓}$ basis, so if the spin is not aligned with the $z$-axis, it forces it to be aligned. It actually does so by coupling the spin (along $z$) to the physical position of the atom, which is itself projected by interaction with the environment or at the latest with the measuring plate.

From a practical point of view the reason for using of a broad flat beam may be as simple as getting easy alignment and decent rate while not blurring the signal with a significant z-direction dispersion.

No need to over-complicate things.

But what happens to particles that don't have z-aligned spin?

The shape doesn't change, it's the density of measurements that forms the shape that changes.

Does the SG device alter the spin moment of the particle?

Someone can correct me if i'm wrong but i don't think it does.

This is a topic which is the subject of huge misconceptions even going so far as Feynman. There is no machine which splits a ray (a pencil-shaped beam) of silver atoms into two paths. The reason is obvious. You cannot build a magnetic field whose strength varies in the up-down direction without at the same time having it vary just as much in the x-y direction.

The unpolarized ray of silver atoms is actually spread out into a ring. The polarized ray does something even more interesting. I wrote about this on my blog a couple of years ago: The Quantization of Spin Revisited

Not the answer you're looking for? Browse other questions tagged quantum-mechanics quantum-spin measurement-problem magnetic-moment or ask your own question.