Parallel-plate capacitors with surface area $A$ and (opposite) charge density $\sigma$ feel (to a good approximation) an attractive force independent from their separation $F = \frac{\sigma}{\epsilon_0} \sigma A \cdot (\Delta x)^0 = \frac{\sigma^2 A}{\epsilon_0}$.

Springs fulfill Hooke's law $F = - k \cdot \Delta x$ due to its coil-like shape and to the elastic properties of the material used. Elastic solids to a first approximation also do.

Is there any device that satisfies $F = - l \cdot \text{sgn}(\Delta x)(\Delta x)^2$ for a constant $l$? Or is there any bulky material with a vanishing linear stress tensor? Thus making the quadratic term the leading one.

I'm looking for a device that you can attach to couple three bodies, each one to the other two independently. For example, for independent springs $k_1$, $k_2$ and $k_3$ and for three arbitrary masses I could write: 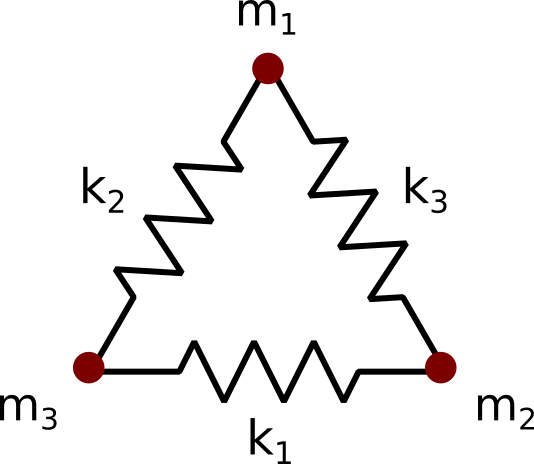 One example is the motion of a mass that falls into a tunnel that pass through the center of a planet. If the density of the planet is radially symmetric ${\rho}(r)$ and grows linearly with r, then the force experienced by the mass will be proportional to $r^2$ :

Not the answer you're looking for? Browse other questions tagged experimental-physics material-science or ask your own question.

1
How does compression of carbon atoms work?
3
Calculating force absorbed by compression of a material (i.e. rubber)
1
Neutron Diffraction Device
0
Tension and compression in bicycle wheel spokes - what holds the wheel in place?
0
Creating a lighter than air buoyancy force with aerographite dust?
2
On/off magnet for purely mechanical (no power source) railgun-like device