Why can't the ocean be frozen by blowing on it?

What is the best explanation for what is wrong with the following example explanation?

Just as you and I can cool a hot bowl of soup by blowing on it, a blast of his breath can freeze an ocean!

Are there other problems with this explanation and illustration which can be used to explain basic thermodynamics, etc.?

It seems the next step would be to abandon the above explanation as just super-breath (strength and volume of air) but also that the air Superman ejects as below ambient temperature.

At that point, apologists will cite the Joule-Thomson effect which, granted, can cool a gas but also seems to trigger unintended implications as well. What is wrong with the "Joule-Thomson effect" as the explanation for Superman's freeze breath? I suspect the volume of air needed and the speed at which it would have to expand is problematic.

Finally, I have the instinct but not the hard facts, explanation, or science that even if Superman can arbitrarily produce near absolute zero breath, it's still insufficient to perform the kinds of magical "freeze ray" effects routinely displayed. What are the issues and how to communicate them?

When you blow on hot soup, the process by which it cools down is mostly evaporation. In essence, the water molecules with the greatest energy have the best chance of escaping the liquid, and they will take "more than the average amount of energy" with them. It's the thermodynamic equivalent of saying "when the smartest guy leaves the room, the average IQ of the remainder drops".

Now normally, there is equilibrium between a hot liquid and the vapor above it: at a certain concentration of vapor in the air, the rate at which water molecules go back into the liquid is equal to the rate at which they escape. At that point there is no further cooling. Blowing on the surface "blows away" the vapor, and disturbs the equilibrium: this means more liquid can evaporate.

Unfortunately, as the temperature of the liquid (and air above it) drops, so does the saturated vapor pressure. The data is tabulated at this link all the way from -80 C up to 373 C. A couple of values of interest:

As you can see, the saturated vapor pressure of hot liquids is SIGNIFICANTLY greater: this is why evaporation is an efficient cooling mechanism. For colder water / ice, it is much less so. So just blowing air to keep the relative humidity above the water down isn't going to work.

This leaves us with the second, less efficient mechanism: blowing cold air. Now according to the cartoon, the air coming out of Superman's mouth is not liquid: this puts a lower limit on the temperature of his breath. Oxygen has a higher boiling point (90 K) than nitrogen (77 K), so we assume the breath has a temperature no lower than 90 K. Now the question is: is it possible to blow such cold air across water fast enough that heat will flow from the water to the air (so the water freezes) faster than heat will flow from the rest of the sea back to the newly-formed ice?

If you blow air across a surface, the rate at which heat can be extracted depends on the flow velocity, the surface texture, and the temperature difference. The colder the surface of the ice, the less heat you can transfer to the air - and the more heat will conduct across the ice from the sea below.

According to the Engineering toolbox the thermal conductivity of ice depends a bit on the temperature; for our purposes we will pick a value of 2.5 W/mK.

Next we need to figure out how well we can remove heat by blowing cold air: according to engineers edge a value of 250 W/m$^2$K would be at the high end, so let's use that.

The final piece we need is the fact that the latent heat of fusion of ice is about 334 J/g. If we assume (to keep things simple) that the density of sea water is 1000 kg/m$^3$ and that we need a "bridge" that is 10 cm thick (if you drive your truck fast, you might get away with that... although the picture shows a much thicker bridge), then we can calculate the heat per unit area that we need to remove (I'm ignoring the change in density from sea water to ice... claiming that 10 cm of water needs to turn to ice)

So yes, we need a world of cartoon physics to make this work. Fun to work it out though.

Let's just accept that it is absolutely impossible to freeze the entire ocean solid all the way down to the seafloor, and concentrate on what is achievable ( by nature, not man), using a lake instead, freezing from the top down, as a model.

Freezing degree days (FDD) are the basis for a simple formula used to predict the growth of ice on a lake, and they take into consideration the air temperature, wind speed and radiational cooling.

Please excuse the use of the Fahrenheit scale , the math is easier with it.

An example of how to calculate freezing degree days and how fast ice will build up on the lake: 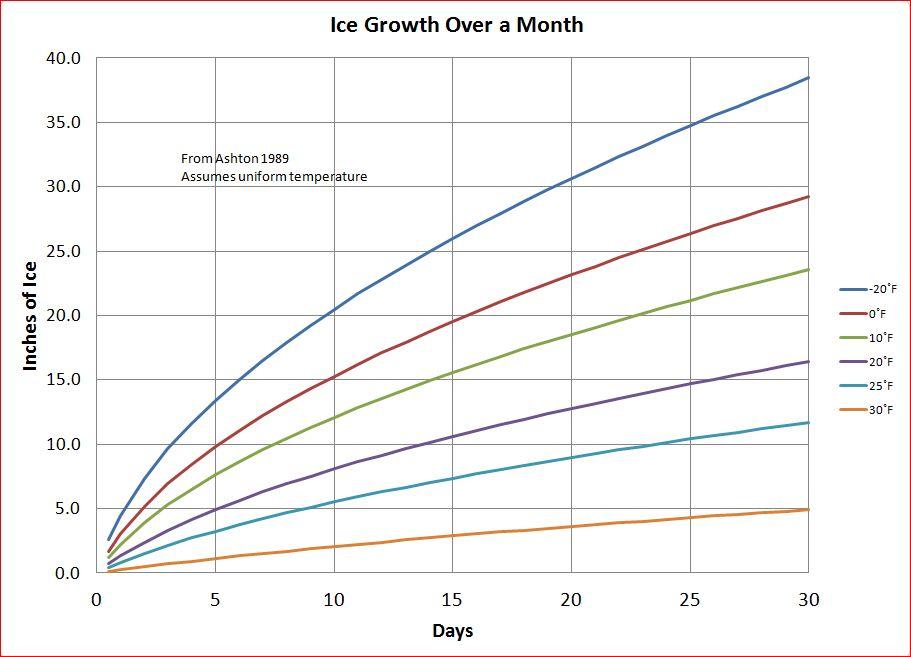 As soon as a thin sheet of ice has appeared on the lake surface, it will generally increase in depth at the rate of one inch per 15 freezing degree days.

The FDD approach is based on having clear skies, no ground snow and a slight to moderate wind speed.  These factors all help to pull heat out of the water and accelerate the growth of ice.

Thick ice acts like deep snow, providing insulation and thus, significantly reducing the formation of more ice .  It is the reason why, in the high Arctic and Antarctic, where winter lasts almost year round, lakes don't freeze all the way to the bottom.

I don't see anything impossible about freezing a surface layer of water sufficient to drive a truck over it. Yes it is improbable, and trying to recreate the effect might be "problematic," but it doesn't defy any laws of physics.

It is clear from the cartoon that the truck driver is not claiming that Superman can freeze the entire ocean, right down to the ocean floor - only a narrow causeway extending indefinitely across the ocean surface. (When we say "The lake is frozen" we don't mean completely, only the surface.) The depth of the causeway above water (around 1.5m) is misleading. It is far more than is required to keep the truck from getting its tyres wet. A few cm would be sufficient. 9/10 of the causeway is under the water.

If you are going to criticise the cartoon, why not start by criticising a man flying without any visible means of lift or propulsion? Or breathing out a limitless supply of freezing cold air without freezing to death his work colleagues at The Daily Planet? Or his birth on an unknown planet many light years away? Or why he doesn't look any different from a human despite his very different origins? The whole idea and story of "Superman" is "problematic." The story is not meant to be scientific - it is fiction, fantasy, entertainment.

35
Pouring oil on choppy water to calm it , does it work and if so how?

6
How can ambient cooling cool a system to below the ambient temperature?
4
Why does freshwater freeze from top to bottom?
0
Can cooling airflow be too fast for efficiency?
4
The Joule-Thomson Effect vs Adiabatic cooling
0
Calculating heat loss to environment while an object is being heated up using Newton's Law of Cooling