If particles get mass from the Higgs field, why do we not see Brownian motion?

If an electron would otherwise be moving at the speed of light if it weren't constantly interacting with the Higgs Field, how is conservation of momentum preserved if it's constantly bouncing off of virtual Higgs Bosons? Why does this not lead to particles like electrons experiencing Brownian motion from all the random collisions?

The cartoon of particles getting their mass by repeatedly bumping into Higgs field is truly misleading--to the extent that it has led the OP to ask this question (which to most high energy physicists sounds "silly").

Here, I can offer another slightly better cartoon that addresses the conceptual issue:

Imagine the Higgs field as a large collection of closely-spaced stumps jutting out of the surface of a vast body of water. Water waves (representing the quantum massless particles in this analogy) attempting to traverse the area with stumps will be multiply scattered, causing them to be "slowed down" which looks like these waves corresponding to particles have acquired a mass. Since we have have replaced the massless particles with waves, this cartoon offers a "smoother" picture which makes it easier to discard the notion that any Brownian motion would occur.

Please keep in mind that this is just another cartoon: every analogy that highlights a particular feature (in this case, the lack of any Brownian motion in the Higgs mechanism) always falls short in something else (the loss of wave packet localization due to the numerous haphazard scatterings, and the apparent loss of momentum conservation as the waves are scattered).

None of this is particularly tied to the fact that it's a left/right chirality flipping interaction.

That's an interesting question. As @JgL says, particles that interact with the Higgs field (e.g. electrons) experience a drag, which makes them massive. You wonder whether these interactions could impart momentum to the electron.

Let's extend the analogy to a ball being thrown through water. If the water is sloshing about, as well as providing drag, the waves could impart net momenta on the ball, making it deviate from a straight line. This is only an analogy; there are aspects of drag (e.g. energy loss as ball slows down) that is quite unlike the Higgs field.

The physical Higgs bosons, $h(x)$, could indeed impart momenta; however, this would be nothing but collisions (elastic scattering) between Higgs bosons and electrons. As there is no big source of background Higgs bosons, the probability of any interactions is negligible, and it doesn't cause the electron to deviate from a straight line.

The Higgs field is a field that permeates all of space (very much like the electromagnetic field), Higgs bosons are 'excitations' of this field. In some contexts, you can roughly think of these excitations as ripples or waves in the field, though this is a bit of a sloppy analogy. I would say these 'excitations' have a much richer structure than just being simple waves, which allows them to also behave as what we normally think of as particles.

(Sometimes people prefer to explain Quantum Field Theory in terms of particles to avoid having to mention 'excitations' or 'fields'. When they do this they often talk about 'virtual particles' where they are actually talking about interactions between fields. This, unfortunately is a problem that arises often when you try to explain things by analogy. Your explanation will only seem to make sense as far as your analogy holds. )

Edit: If you know some electromagnetism you can maybe try to play around with two classical fields $\phi$ and $\chi$ who's interaction is described by the Lagrangian $$ \mathcal{L} = \partial_\mu \phi \partial^\mu \phi + \partial_\mu \chi \partial^\mu \chi + \phi^2 \chi^2 $$ If the coupling term $\phi^2 \chi^2$ wasn't there, waves in the two fields could freely propagate at the speed of light. The behaviour of both fields would be described by a differential equation of the form $$ \frac{1}{c^2}\frac{\partial^2 \phi}{\partial t^2} = \nabla^2 \phi $$ The coupling $\phi^2 \chi^2$ causes waves in the $\phi$ field to interact with the $\chi$ field. Waves in the $\phi$ field will as a result experience some form of 'drag' (not in terms of friction, but as a consequence of the way the fields interact with each other). When we turn this coupling on, the above differential equation that describes the behaviour of the $\phi$ field will be changed, an be of the form $$ \frac{1}{c^2}\frac{\partial^2 \phi}{\partial t^2} = \nabla^2 \phi - \chi^2 \phi $$ The amplitude of the $\chi$ field at a point $x_i$ now behaves as an effective mass that is experienced by the waves in the $\phi$ field at that point. This is analogous to the way the Yukawa coupling of the Higgs field gives an effective mass to many other fundamental fields.

If an electron would otherwise be moving at the speed of light if it weren't constantly interacting with the Higgs Field,

Here is the first misunderstanding , the electron is not "interacting" with the Higgs field in terms of exchanging energy or at least momentum, which is what "interaction" means classically and quantum mechanically.

Quantum mechanical interactions are represented by interaction vertices in Feynman diagrams which have a definite coupling constant of interaction and describe the integral that has to be evaluated to get crossections and lifetimes. The acquisition of mass happens at the wave function level, before probabilities for interactions are calculable.

The acquisition of mass for the massless particles happens below a specific energy when the electroweak symmetry breaks and from then on all electrons acquire a fixed mass. In the present standard model of the universe that happened at 10^-10 seconds after the Big Bang., and the average particle energy was of the order of 100GeV.

how is conservation of momentum preserved if it's constantly bouncing off of virtual Higgs Bosons?

It is not bouncing off Higgs bosons, it is just the the units of reference of the vacuum have changed, there is a non zero vacuum expectation value for the Higgs field, whereas the electron field and all the other particle fields have zero expectation value if no particle is there, the Higgs field has a value and that imposes constraints on all the other fields, not interactions.

Why does this not lead to particles like electrons experiencing Brownian motion from all the random collisions?

If particles get mass from the Higgs field, why do we not see Brownian motion?

It isn't. We make electrons and positrons in gamma-gamma pair production. We start with photons moving at the speed of light. These photons interact with each other, such that each changes direction and starts interacting with itself. Then it continually changes direction, in a chiral spin ½ fashion. Only then we don't call it a photon any more. We call it an electron. Or a positron if it has the opposite chirality. And as Einstein said, the mass of a body is a measure of its energy-content. Not the measure of its interaction with some field. See https://arxiv.org/abs/1508.06478 by van der Mark and (not the Nobel) 't Hooft. If you catch a massless photon in a mirror-box, you increase the mass of that system. When you open the box it's a radiating body that loses mass.

how is conservation of momentum preserved if it's constantly bouncing off of virtual Higgs Bosons?

Momentum is preserved because it isn't bouncing off virtual Higgs bosons. See this answer. Virtual particles only exist in the mathematics of the model.

Why does this not lead to particles like electrons experiencing Brownian motion from all the random collisions?

Because it's a fairy tale. See page 174 of A Zeptospace Odyssey where CERN physicist Gian Guidice says 98% of proton mass results from E=mc², whilst electromagnetic effects and the Higgs mechanism account for 1% each. 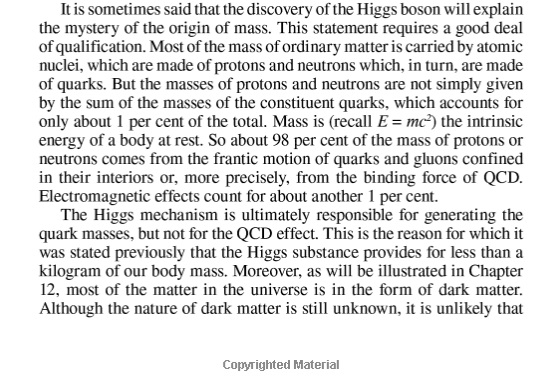 As for whether that 1% is correct, well. Don't forget that we've never ever seen a free quark. However we have seen low-energy proton-antiproton annihilation to gamma photons.

I think the best way to think of this is that it's like opening one box with another. Then each is a radiating body losing mass. All of it. And then that box isn't there any more.

Not the answer you're looking for? Browse other questions tagged mass standard-model field-theory higgs brownian-motion or ask your own question.

3
How can coupling with the higgs field slow a particle down?
6
do Higgs Bosons happen in nature all the time? Rarely? Or do they only happen when the Higgs field is excited in a particle accelerator?
23
Is the Higgs boson not responsible for most mass?
4
Why some particles interact with the Higgs field and others don't?
2
Stability of a system of Brownian particles with non-physical collision
2
Why the photon doesn't acquire mass with the Higgs mechanism?
1
$W$, $Z$ bozons and fermions gained their masses WHEN?