Greetings, it is asked given the next circuit 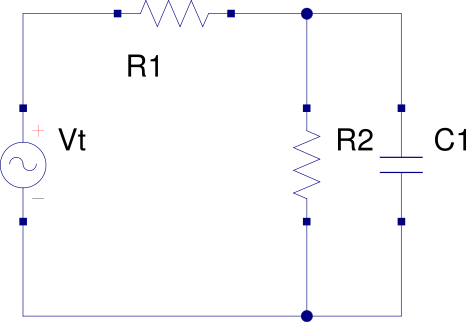 This says the problem, Im writing down if this helps, dont pretend to have a a question of questions =)

Lets says the most interesting part to me is calculating the values of the elements, so the first thing done its to get the mathematical model of the system, taking the variable of $V_C%$, it yields as

neat! Next to obtain the total response of the system Using the Laplace transform it yields

and the impulse response

but then I dont get how to get the C value

Since the voltage of the source is constant for $t>0$, so for $\lim\limits_{t \to \infty}$ the current through the capacitor should go to zero. Also note that the voltage of wires which are connected together will have the same value.

Using Ohm's law you can indeed conclude that,

Using this relation you can indeed find the following differential equation,

for a constant value for $V(t)$ this has the solution,

which should be equal to $i_C(0)$, but as you can see this is not a function of $C$, so it can not be used to solve for $C$. So not enough information is given to derive the value for the capacitor.

Not the answer you're looking for? Browse other questions tagged homework-and-exercises electric-circuits electrical-resistance capacitance linear-systems or ask your own question.