Electric field and electric potential due to induced charges on the inner surface of cavity at outside point is?

In the shown figure the conductor is uncharged and a charge q is placed inside a spherical cavity at a distance a from the centre(C).Point $P$ and a charge $+Q$ are shown. 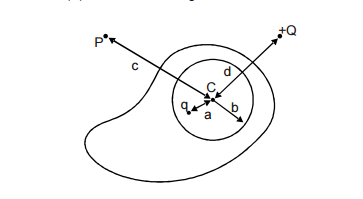 I want to find electric field due to induced charges on the inner surface of cavity at point $P$.

Also,I want to find the electric potential due to charges on the inner surface of the cavity and $q$ at $P$.

I think it should be $\dfrac{k(-q)}{c}+\dfrac{k(q)}{x}$ where $x$ is distance between charge $q$ and point $P$.But the answer given in my textbook is $0$.I've no idea why!Its seems very strange.Can someone clarify?

For problems of this kind you need Gauss' law, saying that the electric flux through a closed surface is proportional to the charges contained inside that surface. Then you also need that inside of a conductor, there cannot be any electric field.

Taking these things together give you a route towards your first question. Please think about it yourself before continue to read.

You can again use Gauss' law to derive the result. Alternatively one can use that a spherical distribution of charges act to things on the outside like if the charges were concentrated in the middle.

We noticed already that there is a charge $-q$ on the inside surface of the cavity such that the charge $q$ is screened. Concentrating both charges to the middle gives $Q = 0$, therefore there is no electric field on the outside. This assumes that there are no charges on the outside of the conducting blob. If the conductor had been neutral before the point charge was implemented, there would be a net charge $q$ on the outside now because $-q$ charges went to the inside. This would then create a new field which can be detected at point $P$. Because the blob has such an undefined shape, it will be extremely hard to compute the actual field there. This is a hint that the field is zero :-).