So I was studying my physics notes. They are on the magnetic field shown by a straight current carrying wire. To demonstrate that theres the oersted's experiment. The starting goes like this-

Insert a thick copper wire between 2 points, X and Y, in a circuit. The wire should be perpendicular to the plane of paper. Place a compass horizontally to the wire. Switch on the current. The compass needle shows deflection

My question is - what does placing the wire XY perpendicular to the plane of paper mean?

And why would you do that? Please help.

“The paper” is probably just meaning the table. So let's put the wire vertically going in the up-down direction. Using the right-hand-rule we obtain that the magnetic field will be circles in the plane of the table/paper.

My question is - what does placing the wire XY perpendicular to the plane of paper mean? 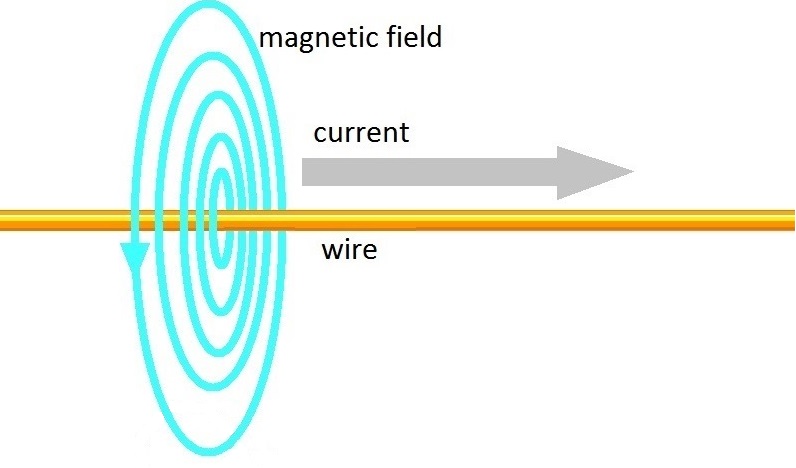 By the way, despite what you might be told by people who can't answer your questions, there are people who understand magnetism and how it works. Don't listen to people who tell you physics can't supply the answers. It can. That's why we do physics. We do physics to understand the world, not to make predictions. Don't forget that Maxwell wrote On Physical Lines of Force. The force is real, and so are those iron filings and the pretty patterns:

Whilst there are no "lines of force" per se in the space around the wire, they do map out something real - a magnetic field. Electromagnetic field interactions result in linear and rotational forces. A uniform magnetic field is a place where the linear forces cancel, but the rotational forces do not. Hence when you throw an electron through the middle of a solenoid, it follows a helical path. Note though that a typical magnetic field is not uniform, and so we see linear forces too. Hence two wires like the above attract one another. But if you reverse the current in one of the wires, they repel.

2
Using Ampere's circuital law for an infinitely long wire & wire of given length
2
Magnetic Fields created by Current-Carrying Wires
0
Why is magnetic field perpendicular to that plane?
0
Does the current gets reduced?
1
Deflection of a compass due to electric current
2
Magnetising a needle with static electricity using silk cloth