This sentence makes no sense, electrostatics and electrons moving in a conductor - current 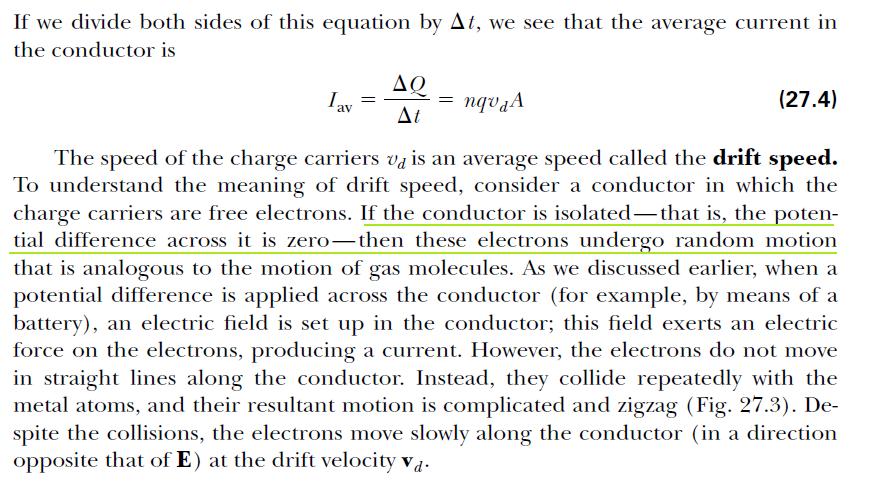 I highlighted the part where the confusion is.

The sentence said that the potential difference is 0, yet it then immediately talks about how electrons can have motion.

What are they trying to say?

You may be confusing several concepts here.

The interior of a conductor is net neutral, but that doesn't mean that there are no conduction electrons: just that the material is neutral.

Those electrons--like everything else at that scale--are in constant motion due to their thermal kinetic energy. The bulk flow of those electrons when there is a potential gradient is in addition to the random motion of the individual electrons. When the potential goes away, to bulk flow ceases, but the thermal motion remains.

dmckee's answer has nailed it, but to try and put it more simply (and less accurately) suppose instead of electrons in a wire you were looking at gas molecules in a tube. If there's no pressure drop along the tube, i.e. no voltage drop along the wire, there will be no net flow of gas. But this doesn't stop the gas molecules whizzing about at random in all directions. It's just that because the motion is random it all balances out and there's no net flow of gas.

If you now turn up the voltage, i.e. create a pressure gradient along the tube, gas will now start flowing just as electric current flows in a wire. The gas molecules are still whizzing around like crazy, but now there is a net flow along the tube just as you get a net flow of electrons in the wire.

Actually my analogy isn't so weird. Electrons in a metal can indeed be approximated as a free electron gas. The equivalent of the gas molecule velocities is the Fermi velocity of the electrons.

What the book is saying is that the electrons move around randomly even when there is no potential, and when you apply a potential, more move downhill in potential energy than move uphill, leading to a net flow of charge which you see as a current. This picture is the "Drude model" of electric current, and it is completely wrong because it is based on classical physics. It is not correct in any approximation, and nothing you get from it is in any way useful. It is as wrong as the plum-pudding model for the atom.

The electrons are not doing this type of motion, at least not a lot of it, because the density of current-carrying electrons is extremely high. There are order 1 current carrying electrons per atom, so their density is 1 per region occupied by an atom. The size of an atom is determined by quantum mechanics, so at these small scales, the electrons that carry the current must be described by quantum mechanics, at least until energies where all the atoms fall apart into plasma.

The basic idea is that a conduction electron (just imagine one for now) is sitting on an atom, and can hop to the left or to the right (or forward or backward) by one unit. This process is quantum mechanical, and the hopping is described by the probability amplitude for hopping (the complex analog of probability central to quantum mechanics). The result (which is explained in Feynman Lectures on Physics Vol. III) is that the electron moves around in waves that are described by the Schrodinger equation, with a mass which is determined by the hopping amplitudes.

The result is that in a perfect lattice, a hopping electron behaves just like a free electron, it goes from atom to atom, distributing its wave all over the lattice, and this wave is described by the same equation as an electron in free space. This is why the electrons in a metal don't collide with the atoms. If the crystal were perfect, they would just move unimpeded as if in vacuum. This means that the resistance of a metal is due to dynamical impurities, and random jiggling of atoms (phonons), not to collisions of the electrons with atoms. These collisions just cannot happen, because the electronic motion is an effective one, which is a consequence of the quantum mechanical transfer of electron from atom to atom.

The way to be sure that this is true, experimentally, is by noticing that the "mass" of the electron in the metal is determined by the hopping, by the degree of sharing of the electrons between neighboring atoms, and is not related in any obvious way (other than by order of magnitude) to the mass of the electron. This means that if you measure the mass of the current carrying electrons in a metal, like by doing diffraction experiments like a two-slit experiment inside a metal, you will get crazy numbers. Indeed, the effective mass of an electron in a metal ranges from very small to very large.

So a metal crystal is just like empty space for an electron, except the mass is altered. The electron travels in a wave inside the metal.

A perfect metal box then has a lot of standing waves as solutions to the quantum mechanical problem. Each sine-wave you can draw that has an integer number of wavelengths that fit in the box is a different allowed quantum mechanical motion. An electron can move in any one of these waves, and each one can be thought of as the quantum version of moving in a straight line at constant velocity back and forth inside the box, bouncing off the walls. But these are energy eigenstates, so that there is no meaning to where you are (more precisely, there is no meaning to when you are), but only to what the general motion looks like.

When you have several electrons, they obey the exclusion principle, they cannot sit at the same state. So when you have two electrons in a box, one can be in the lowest longest sine-wave, but the second has to be in a higher sine wave (or in a sine-wave along a different direction). Remember that wavelength is momentum in quantum mechanics, this is deBroglie's relation.

When you have one electron per atomic volume, the electrons fill up all the states until the wavelength is as small as the atomic radius. The filled up states mean that there are electrons whizzing around at all momenta up to the cutoff, and they fill up the low-energy states one by one like water filling a cup--- level by level, up the the energy called the Fermi energy, where you run out of electrons (actually, sometimes you run out of modes that fit in a lattice sooner, or at the same time, but ignore that, this is called band-filling)

The result is that you have a Fermi gas of electrons inside a metal, and the electrons are strange--- they have momentum in all possible direction, but they aren't going anywhere. You can't move any of the electrons, because if you try to change it's k, you can't, because there is already an electron filling up a nearby k. The best you can do is knock electrons near the fermi energy up in energy to a new unoccupied state.

When you apply a voltage, the electrons near the fermi energy roll down the potential gradient by filling nearby states which are now lower in energy, and this is the current. The electrons participating in this process happens at the fermi-velocity (around 5000 m/s), and it only depends on temperature to the extent that there are phonons and other dirt in a temperature dependent way.

This is the correct picture of a metal. It shows you:

Because you are cutting delocalized electrons when you slice through a metal. The whole metal is like one gigantic chemical bond binding all the atoms together, because the electrons are delocalized over the whole material. It isn't like salt, where if you cleave, it's easy for the electrons to pick sides.

Because the electrons are so delocalized, if you heat one part of the metal, the heat jiggles electrons which are also somewhere else, and this transfers the heat fast.

Because the electrons holding a metal together are delocalized, not holding nearest neighbors together. So any local change in shape of the atoms is not so bad, the imporatant thing is that the whole Fermi-energy not change. So you can break the weak nearest-neighbor bonds and shuffle the atoms, without breaking the metal. This is also why brittle materials are insulators.

Because the electrons can move and reflect the light. If you've ever wondered what a block of free electrons all held together in the same place would look like, look at a block of metal.

Or rather, why do they contribute so little? In a classical gas, there is a specific heat of 1.5 k, which you would expect in the Drude model. It isn't there, instead there is a small electronic specific heat which varies as the Fermi model says it should. This was the experimental smoking gun for Fermi liquid theory of metals.

This is obviously a part of the Ohm's law derivation. You can find my whole explanation here:

Is it possible to mathematically derive the formula for resistance?

And this is part I wrote about free electrons:

In material you have certain amount of almost "free" electrons. Those electrons behave like particles in the gas, they are crashing between themselves and into atom cores, bouncing back and forth and there is actually no net movement, average speed and current are zero.

Maybe that will help?

(Don't take it too literally though.)

53
Common false beliefs in Physics
13
Is it possible to mathematically derive the formula for resistance?

5
A circuit with no voltage difference, but current flowing
4
DC current in ideal conductor and skin effect?
2
Ambiguity on the notion of potential in electrical circuits?
0
Can we generate electric current by injecting electrons into a copper panel
0
What is the frequency of each of the moving electrons in a DC current?
3
Why do I get a static shock from the metal taps when wearing a fluffy dressing gown
2
How do protons and electrons separate across a conductor in the Hall Effect, if protons "don't move"?