I've heard that reading glasses (negative number lenses but with a "smaller" prescription) need a smaller PD than distance glasses because the pupils are closer when looking at close objects.

At first glance this seems wrong because the center of a lens should be perpendicular to the center of the retina, not the rotated pupil (or perhaps somewhere in between). Which, if anything, would mean that the PD should be greater. Or perhaps this is a mistaken assumption? I'm assuming the lenses are not rotated on reading glasses.

So to conclude, do reading glasses need a smaller PD?

New "bumped to the homepage by Community♦" edit

By reducing the PD we are not only aligning the center of the lens with the line of sight (which, generally, is good). We are also de-aligning (skewing?) the "center" around which the lens is made (which is where the eye is supposed to be) from where the eye is (which is bad).

Any answer needs to address that. Perhaps by saying it's negligible, or that it's better not to change the PD..., some answer.

Short answer - yes. You want the lens to be centered on the optical axis of the eye - and when the eyes turn inwards to focus on a nearby object, the axes get closer together as you move further from the eye. If you push the glasses to the end of your nose, you need the lenses much closer.

The following diagram should illustrate this (source of image: http://www.i4ulenses.com/images/jnlsm.jpg): 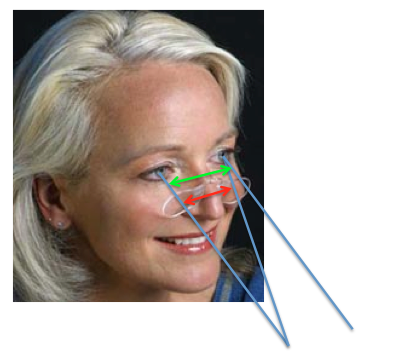 As you can see, when the eyes focus on a nearby point, the optical axes (shown in blue) converge, and the further you are from the eyes, the greater the correction you need to make. Conversely, when you are focused on a distant object, the axes will be parallel. Note that I exaggerated things a bit by finding an image of glasses "at the tip of the nose" - it makes it easier to see what is going on. But the principle is the same even when glasses are right at the bridge of the nose, as the eyes rotate in the socket and the point on the optical axis that doesn't shift laterally is in fact near the center of the eyeball.

UPDATE just to clarify my comment: if the optical center of the lens is not well aligned, the object will appear to be off-center. This means that your eyes will have to point in a different direction - in particular, you may find yourself squinting if the lenses are too far apart, which is likely to give you a headache. I hope this diagram explains: 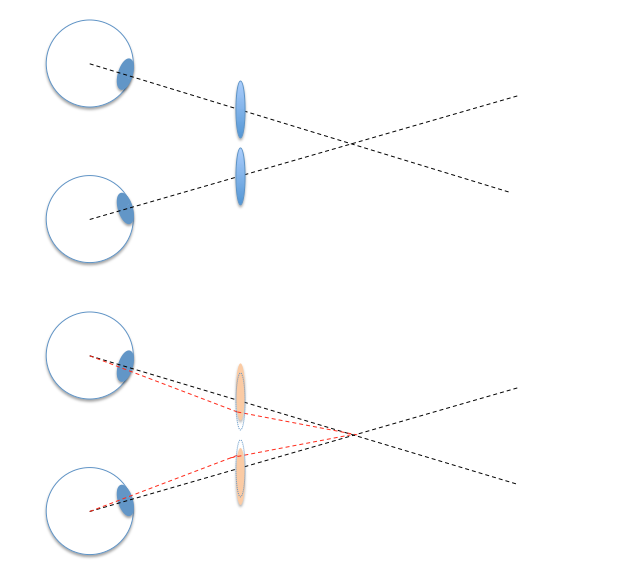 The red dashed line shows where your eyes have to point when the lenses (in orange) are too far apart. Headache!

Not the answer you're looking for? Browse other questions tagged optics lenses vision or ask your own question.

0
Can reading glasses improve one's eyesight of objects lying in the long range?
28
Why do nearsighted people see better with their glasses *rotated*?
3
Myopia / Hypermetropia eye glasses inverting image on retina
47
Do people wearing glasses have different field of view than those who don't?
0
Do objects look brighter when reflected on on a convex mirror?
3
Prescription glasses curved design
2
Eye Optics/Emmert's law: Where to place scaled copies of an object so they have identical images on the retina?