Why is interference there when pulses do not overlap in space and time?

Why is there interference present between the two pulses when looking at the spectrum, if they clearly do not overlap in time, and assumingly in space as well (since $x=ct$)?

The spectrum is detected by a CCD coupled to a spectrometer and the repetition rate of the two pulses is about 125 kHz (this two pulses hit the CCD matrix 125000 times per second). Let's say the pulse duration is about 50 fs (which means, they are 15 um in length). Let's say separation between two pulses in time is about 1 ps, which corresponds to the separation in space ~300 um. They clearly never "see" (overlap with) each other when travelling to the spectrometer. However, the interference is there...

Some clarification. The spectrum shown above is a combined effect of the presence of both pulses. The spectra of the individual pulses (when one of the pulses is blocked somewhere in the optical setup, leaving the presence of only the other pulse) are shown below. So the pulses are almost the same, and the difference is in amplitude. 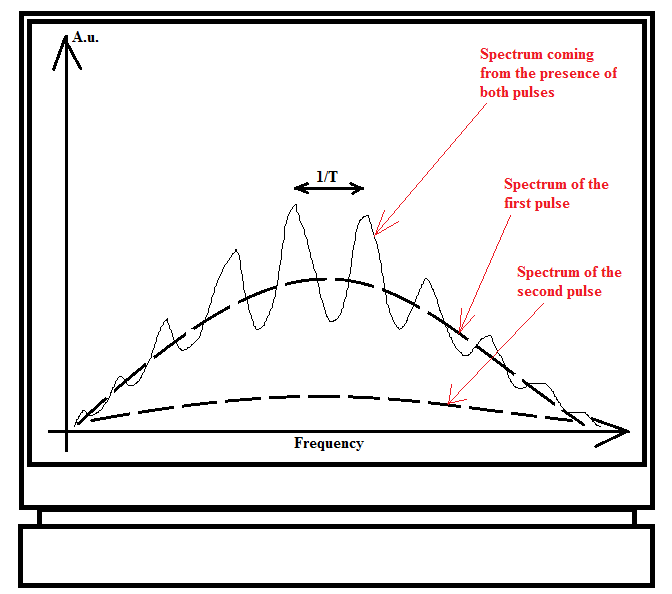 This is a very good question, because we like to think of spectrometers as black boxes, and indeed as seen from the outside there are only two clearly separate pulses going in, so how do they manage to interfere? The answer is clearest by turning the paradox on its head: whatever the interferometer is doing, it needs to be coherently combining the signals from the two pulses, and it needs to be manipulating them in a way that they coincide in space and time.

There's one clear, fundamental way to see that the pulses are simply not as clearly separate as you think. As you well note, if the pulses are separated in time by a delay $T$, the spectrum will oscillate with a crest-to-crest separation of $1/T$. To be able to see this interference, however, you need to be sampling in frequency space at a higher resolution, i.e. your spectrometer needs to be able to distinguish between signals that are separated by $\frac{1}{2T}$ in frequency.

In particular, that means that the observations need to be taking at least a time $2T$, to comply with the time-bandwidth theorem: your spectrometer needs to be interacting with the pulses, in a coherent way, for at least that long. This means that what you thought was a long separation between the pulses isn't all that long at all, and as far as the spectrometer goes they are actually within the same time bin.

Going beyond this sort of fundamental observation is a bit hard, because the term "spectrometer" is spectacularly broad, and it covers an enormous range of devices that interact with the signal in different ways, and each of them will comply with this fundamental long-coherence-time requirement in different ways. (In fact, you've made it clear that you're thinking about light, but the same paradox applies to e.g. RF in a wire, or pressure waves in a pipe, so the answer also needs to apply to those contexts.)

However, it is very, very hard to think about this in general abstract terms, so let me exemplify this with a couple of examples, one of them relatively general and one of them more specific to light.

I don't think that the additional chirp inside the detector to overlap the pulses is neccessary to observe the interference pattern in the spectrum.

Each of the pulses consist of many longituidnal EM modes and they are present even if there is no intensity (which occurs due to their mutual destructive interference everywhere expect for the pulse). Therefore, the field of the two beams will interfere also when their pulses do not overlap in time. At least, that's my understanding of this behaviour.

Not the answer you're looking for? Browse other questions tagged optics electric-fields interference spectroscopy interferometry or ask your own question.

2
Unphysical results of Fourier transforms
1
How can we classically describe the formation of absorption spectra?

1
Intereference rings by light transmission?
0
What happens to the velocity distribution during constructive interference?
0
Superposition of sources being less intense than a single source (deuterium and tungsten spectrums)
1
How can we classically describe the formation of absorption spectra?
1
mode-locked laser Repetition Rate
0
How to combine limits when integrating in the frequency domain
10
How do astronomers identify different elements from the combined emission spectrum of multiple substances?
1
How to properly calibrate phase axis to represent an optical interferometric stability curve?