I'm stuck at the following question: At peak intensity, the photo-diode outputs a current of $I=34\;\mathrm{\mu A}$. At that point $u_0$ needs to be $5\,\mathrm V$. Pick a value for $R$ that accomplishes this. Is the output impedance of this circuit big or small? Why is this not a particularly good way of measuring the light level? 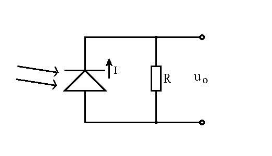 The first part seems simple enough, almost trivial. I get a reasonable value for $R$ directly from Ohm's law. But then it gets confusing. I don't understand how the circuit could have impedance, since don't photo-diodes output DC? Does the question have an implicit AC voltage across the diode? I must be missing something very central here.

That question is utterly wrong!

That is, you cannot get 5 V from a photodiode connected in that way.

A basic equivalent circuit of the photodiode is the following (see this document, p. 3, for a more complete circuit): 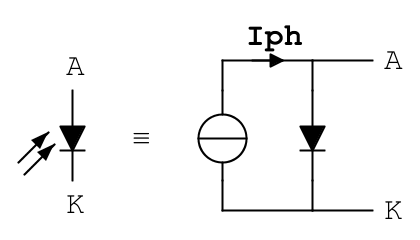 This circuit is valid in the quasi-static regime (signals slowly varying with respect to the photodiode time constants), and the ideal current source generates the photocurrent $I_\mathrm{ph}$. The diode in the equivalent circuit above is a normal diode.

Since the photocurrent biases the diode in the forward direction, you cannot get 5 V across the diode... unless something goes terribly wrong.

I'm sorry to say that whoever proposed you that circuit has never used a photodiode in their life.

How to calculate the output impedance in a correct case

Note: I'll take a long path because I don't know if you have studied the so called small-signal equivalent circuits.

First, recall that the impedance is a quantity that can be defined only for linear circuits. In the case of non linear circuits, like those containing a diode, you can define the impedance by considering a linearized equivalent circuit, that is, a circuit valid only for sufficiently small signals about the bias point.

To determine the output impedance, that is, the impedance as seen by the load, you should substitute the load with a test current, as follows: 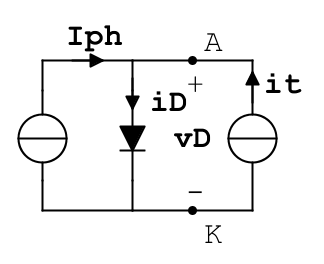 In general, because of the diode, the diode voltage $v_\mathrm{D}$ will be a nonlinear function of the test current $i_\mathrm{t}$, but if $i_\mathrm{t}$ is sufficiently small, we can develop the response by means of a Taylor series expansion:

The expansion above is valid as long the second-order term is negligible with respect to the first order term: this defines the meaning of "sufficiently small". The term

which has the dimension of resistance, is called differential resistance, and it's actually the output resistance you are looking for. In fact, it is the resistance as seen by the load for small variations of the voltage across the diode.

The output impedance is thus the differential resistance of the diode about the photocurrent. This can be calculated from the diode quasi-static characteristic equation

where $I_\mathrm{s}$ is the reverse saturation current, $n$ is a parameter which depends on the doping profile and is usually between 1 and 2, and $V_T = k_\mathrm{B}T/\mathrm{e}$ is the thermal voltage.

From the above equation, we have

If you don't have $n$, you can assume $n=1$ and calculate the differential resistance corresponding to the given photocurrent.

But let me repeat it once again: the voltage across the diode would not be 5 V.

Not the answer you're looking for? Browse other questions tagged homework-and-exercises electric-circuits electrical-resistance semiconductor-physics electronics or ask your own question.

0
Waveforms for a given ideal inverters circuit
1
Why is spectral sensivity of a photodiode expressed in A/W
7
Why is photodiode made reverse biased?
0
Diode-Resistor-Capacitor Circuit Equations
1
Resolve The Envelope Detector Circuit