Why is diffusion a spontaneous process?

I get that it's because the Gibbs free energy of the system is reduced, but what I don't get is why? Does it have to do with electrostatic repulsion? 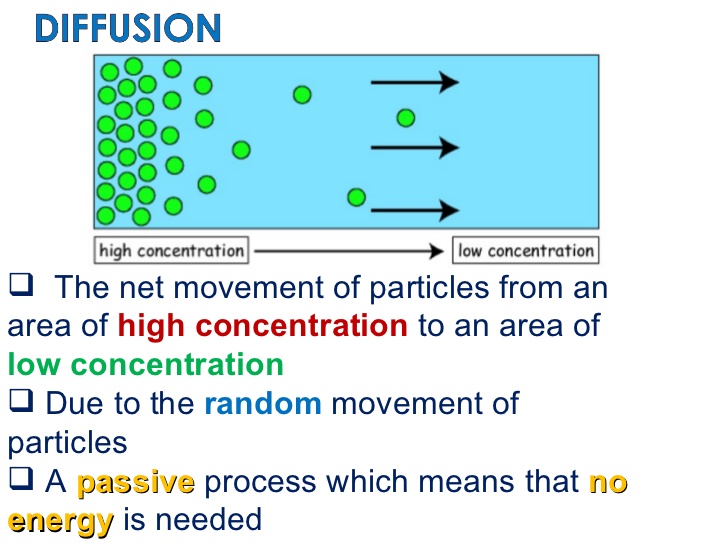 Gibbs free energy is given by

With diffusion processes you can delete the work term because of the reasons listed above.

$J$ is the "diffusion flux," of which the dimension is amount of substance per unit area per unit time, so it is expressed in such units as mol $m^{−2} s^{−1}$.

$J$ measures the amount of substance that will flow through a unit area during a unit time interval.

$D$ is the diffusion coefficient or diffusivity. Its dimension is area per unit time, so typical units for expressing it would be $m^2/s$.

$φ$ (for ideal mixtures) is the concentration, of which the dimension is amount of substance per unit volume. It might be expressed in units of ${mol/m^3}$.

$x$ is position, the dimension of which is length. It might thus be expressed in the unit $m$.

$D$ is proportional to the squared velocity of the diffusing particles, which depends on the temperature, viscosity of the fluid and the size of the particles according to the Stokes-Einstein relation. In dilute aqueous solutions the diffusion coefficients of most ions are similar and have values that at room temperature are in the range of $0.6 × 10^{−9}$ to $2 × 10^{−9} m^2/s$. For biological molecules the diffusion coefficients normally range from $10^{−11}$ to $10^{−10} m^2/s$.

Here's a simple statistical answer, at least to the question in your title. It may not be the specific answer you need but, as a teacher I've found it helps to first understand at a more basic level than free energy. The only scientific concept needed is that particles are constantly in motion.

Imagine a closed box with a divider in the middle. Let's put a hole in the divider. Evacuate the box, no particles at all. Now place 10 atoms of Argon on one side, A, the other side, B, remains empty. Since the particles are constantly moving, some of them will cross over the divider, through the hole, every second. 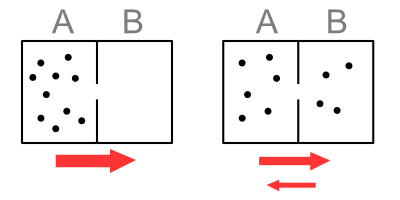 Let's pick up the case where there are 6 atoms in A and 4 atoms in B. Even though atoms are still moving back from B to A, there are more chances for atoms to move A to B because of the greater number of them on side A. So the net movement is still A to B. (Right side of figure above.)

Finally, what happens when there are five on each side. Now the chances of moving from A to B is the same as the chances of moving from B to A. Movement is still occuring but anytime one side gets more atoms than the other, that side has more chances for atoms to leave than to enter. A dynamic equilibrium is established. With real-world amounts of particles it appears, on the macroscopic level, that diffusion has run its course.

There is another way of looking at this if you've at all studied entropy. One aspect of entropy, in simple terms, is that the most favored state of a system is that which has more possible ways of occuring. Applied to the above discussion, how many ways are there of finding all the atoms on side A? Just one. How many ways of finding 9 atoms on side A and 1 atom on side B? Ten, because it could be any one of the ten overall atoms on that side. That means, at any moment in time, we are ten times more likely to see the 9:1 distribution than the 10:0 one. Guess which distribution has the most possible ways for the individual atoms to be distributed? Yep, 5:5 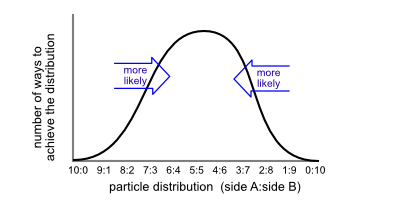 If you plot this out you will see a bell shaped curve bulging in the 5:5 middle. There are more possible combinations of the particle distribution toward the 5:5 split so there is more likelyhood of that being the case at any given snapshot of time.

Not the answer you're looking for? Browse other questions tagged thermodynamics statistical-mechanics diffusion or ask your own question.