Will double or triple pendulums sync when they are on a platform they can affect?

what i am talking about is something along the lines of this video, http://www.youtube.com/watch?v=5v5eBf2KwF8 where 30 metronomes sync themselves on a table. Will the same happen with double or triple pendulums?

As this is a rather complicated system (in particular, if you want to take into account friction), only sophisticated simulations or experiments can give you the definite answer, but here are the three cases to consider and what would be required to observe them:

Let’s first assume that we have no friction. Furthermore, let’s tackle this one backwards and look at the completely synchronous chaotic state, i.e., each pendulum performs the same chaotic motion. This is a solution of the equations of motion of the system because:

So, if I set up all pendulums in exactly the same initial conditions that lead to chaos for the single pendulum (and the slight interaction with the platform does not destroy the chaos), I would observe synchrony.

Now, is this state stable, i.e., would I observe it in reality? For the frictionless case, we have energy conservation and hence time symmetry. Therefore for every solution leading to the stable state, there also exists one leading away from it (the time inverse). In the language of dynamical systems: No attractors in conservative systems. Note that the same reasoning would apply to the setup with single pendulums, so it’s not surprising that we need friction.

In this case, the completely synchronous state would be stable for the same reason it is for single pendulums: Let’s consider a slight perturbation of this state, more specifically, one pendulum being slightly out of step. Then the interaction through the platform would bring it back to synchrony with the other pendulums. (To be precise, the dynamics of the other pendulums would also be slightly affected and shifted towards that of the perturbed one. The final dynamics would be in between with a strong tendency towards the bigger group of pendulums3)

So, if I set up all pendulums in exactly the same initial conditions that lead to chaos for the single pendulum and I make some inevitable errors, I would still observe a synchronous chaotic state.

There may be other solutions to the equations of motion, e.g., half of the pendulums swinging in exactly the opposite way than the other half, but these states should not be stable, and if they are, they should be considerably less likely (i.e., have a smaller basin of attraction) than the synchronous state. Once more, the same thing applies to the single pendulums. We can thus assume that the synchronous state is the attractor for most initial conditions.

So, for random initial conditions, this globally synchronous state should be eventually assumed, but due to the more complex dynamics, this may take considerably longer than for the single pendulums. Most importantly, it may take longer than it takes for friction to take its toll. But, for a benign setup (friction, mass of the platform, …), you should observe a completely synchronous chaotic state.

For this to happen, your friction needs to be so strong that it eats up all kinetic energy before any synchronisation. Just once more, this also applies to single pendulums.

As the comments above indicate, the probability of synchronised motion of the proposed system is virtually nil.

Taking the double pendulum as an example, I include two illustrations that may persuade you that inherent and unavoidable chaotic motion assures us that synchronised motion will not result and/or be maintained.

Motion of the double compound pendulum (from numerical integration of the equations of motion. 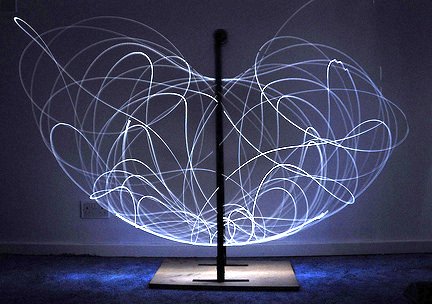 And this is just for a double pendulum!!

Not the answer you're looking for? Browse other questions tagged newtonian-mechanics chaos-theory coupled-oscillators complex-systems or ask your own question.

6
"Artificial gravity" on a rotating space stations
17
What causes a soccer ball to follow a curved path?
15
The secret behind the spinning, asymmetrically weighted, 2D disk-shaped top?
4
What is happening in this video of a hamster running?
3
Synchronizing Pendulums
2
Does the Sun "drag the solar system through space"?
2
Why is the rod moving to and from?
0
To what amount can sidespin change the flight curve of a ball?
0
Will a double gyroscope provide net upward force when rotated?